Most wildlife biologists tell me that property owners with a decent amount of deer-harboring cover and finite financial resources are simply not capable of eliminating all the coyotes from an area. And they say that’s a good thing. Fact is, predators shouldn’t entirely be wiped out of an area because they maintain an ecosystem’s healthy balance, even if that means cleaning up sick, wounded or an overabundance of deer.

However, if you believe you have too many coyotes and not enough deer—or perhaps your wild hog situation is out of control—the most impactful thing you can do is to reduce the predators in your area during the summer months when fawns are young and vulnerable. Trouble is, coyotes and hogs almost exclusively lay low during summer days and rarely come out to hunt and maraud until nightfall. So if you plan to hunt them in the summer when it matters most, your best bet is to do so at night. 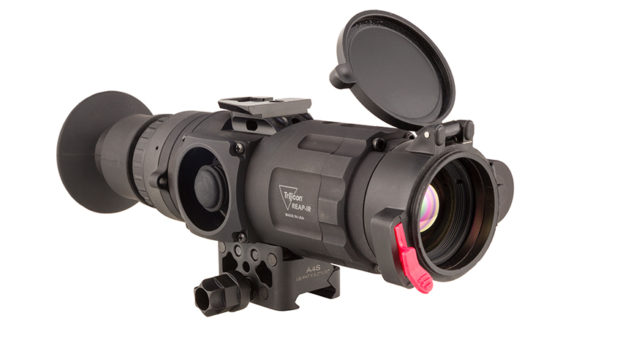 There is no more effective personal tool for hogs and coyote eradication than an accurate rifle topped with a thermal weapon sight like the incredible REAP-IR mini thermal riflescope from Trijicon. Sure, it’s expensive—way out of my budget—but holy cow is it an impressive piece of technology for those who can afford it! What follows is its review.

The REAP-IR is a thermal imaging weapon sight that’s a good deal smaller and less expensive than the top-end thermal sights of just a few years ago. Yet Trijicon, the company known for its tough-as-nails U.S. military-contract optics, packed the 20-ounce unit with technology and features. It’s called a “weapon sight” rather than simply an optic or scope because it contains a reticle (actually, it contains five pre-loaded digital reticles you can choose from) that is to be zeroed to your rifle and used to aim just like a regular riflescope. Except, unlike a riflescope, the shooter’s sight picture is not formed by looking through glass lenses. Rather, the REAP-IR, like all thermal imaging units, is more like a digital camera.

The REAP-IR uses on-board infrared detectors to detect and gauge tiny amounts of infrared energy—heat—given off by all objects in its field of view. This data is then processed by a CPU that translates it into an image that is then projected onto an OLED screen within the viewfinder. This is what the user sees, and it all happens in a fraction of a second, so there is no noticeable lag; the image is refreshed at 60 frames per second, so the video appears as if it is in real time. The reticle and data screens are then superimposed over the image to facilitate aiming.

It all sounds fairly simple, but it’s actually quite amazing when you realize that the REAP-IR can detect tiny differences in energy waves, analyze them, and form an accurate image of an otherwise invisible object from distances out to around 400 yards, depending on conditions. Certainly you can see warm objects like animals from much farther away than that-perhaps a little more than 1,000 yards—but they are too indistinct to shoot at. Nonetheless, this is outstanding performance, thanks to the REAP-IR’s 640×480 pixel resolution that, according to company literature, has four times as many pixels as most competing thermal units and a 12 micron pixel pitch that’s superior to competitors’ 17 microns. 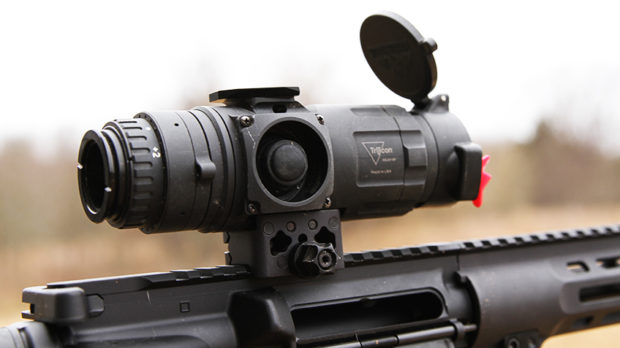 The IRMS-35 unit I tested, which is the second smallest of the four models Trijicon offers in its REAP-IR line, features 2.5x magnification with an 8x digital zoom. It runs off two CR123 lithium batteries that last approximately two hours. The 6.5-inch-long unit easily mounts to any Picatinny rail system.

Using an innovative thumb-controlled joystick, the REAP-IR can be electronically toggled between three viewing modes including “Black Hot,” “White Hot” and new “Edge Detect.” Think of the Black Hot as the warm portions of the image showing up as black silhouettes, while the white hot is the inverse wherein everything that’s warmer that the areas around it show up as white. In certain scenarios, one works better than the other, so this scope gives users the choice. I found the REAP-IR’s toggle system to be easy to find in the dark, but it’s not the most intuitive user interface I’ve ever seen. With practice, however, you’ll get it down and be able to toggle through the various controls without coming off the rifle.

One downside of thermal scopes as well as most night vision scopes is that they are very bright compared to an otherwise dark, nighttime environment, therefore your night vision is ruined for a few minutes after looking through them. To remedy this, Trijicon developed an “Edge Detect” mode, where only the outline of a warm object shows up in white, thereby reducing the overall brightness of the image to protect your night vision during times of total darkness. It’s a handy feature. There are so many other features embedded within this unit’s software that they are impossible to list here.

In using the REAP-IR for several weeks to hunt hogs, coyotes and raccoons, I drew several conclusions. First, it’s an awesome tool that gives vermin hunters and land managers a huge advantage over visible lights and traditional night vision. Remember that classic 1980’s Arnold Schwarzenegger movie “Predator,” where the Predator sees in thermal vision? That’s essentially what Trijicon has created three decades later. Animals stand out like glowing beacons amid a dark sea of grass, even at 1,000 yards. However, thermal scopes, including this one, are not all-seeing. Trees, heavy grass and other cover will mask the thermal signal, thereby making that animal invisible until it moves from behind cover. Even so, there is no quicker way to scan a huge field for animals.

The REAP-IR can also be used as a handheld unit to track wounded game and find blood trails in total darkness, provided you get on the trail before it has a chance to cool down.

With all digital optics that produce an image upon an LCD screen, it’s easy to misjudge distances when viewing an object at night because you have few points of reference. For example, a few times I thought a hog was at 300 yards, but it turned out that it was at 75. Trijicon remedied this by using stadiametric technology in the REAP-IR. Simply enter the size of your target, adjust the range marks to that target, and the distance will appear in the on-screen readout—problem solved. 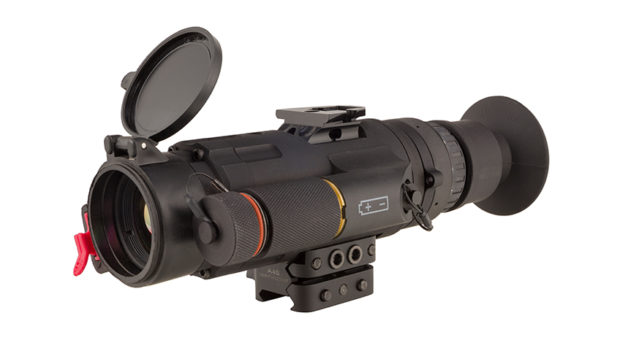 The battery life was shorter than I’d like, but, then again, it’s amazingly efficient for only using two small batteries. The upshot is that they’re easy to carry and swap out.

All in all, the unit is uber-compact and easy to hunt with. The 6061-T6 aluminum housing and Mil-Spec made in USA product also extremely durable, as I demand for this kind of money. I dropped the unit a couple times, banged it around while getting in and out of trucks and even shot it numerous times on a lightweight .308 rifle. It showed no signs of damage. As you would expect from Trijicon, however, it is backed by a robust warranty.

While I shot a few hogs, a coyote and several other vermin with it, I also found that I liked having the REAP-IR in my country home at night, knowing that if danger lurks outside—whether in animal or human form—the REAP-IR on top of a rifle gives me a serious advantage by not mandating that I reveal my location with a flashlight, yet still being able to deliver precision shots. Until you look through a top-end thermal unit such as this one, you don’t know what you’re missing.

No doubt, Trijicon’s REAP-IR (as well as its three other lines of thermal imaging scopes) is expensive indeed, but if you want the latest and greatest technology available to civilians, this is it.