Georgia unveiled the legal arguments it will use to defend its “heartbeat bill” against legal challenges Monday, telling an Atlanta federal court the state has a substantial interest in protecting life.

A coalition of abortion rights groups led by the SisterSong Women of Color Reproductive Justice Collective are challenging the law in federal court. They are seeking a preliminary injunction barring enforcement of H.B. 481, though the state believes that request is premature, since the law will not take effect in the near future.

“House Bill 481 bans abortion,” the plaintiffs wrote in court documents. “It does so in clear violation of Roe v. Wade and nearly a half century of Supreme Court precedent reaffirming Roe’s central holding. It is an affront to the dignity and health of Georgians.” (RELATED: Planned Parenthood Withdraws From Title X Funding Over Trump Abortion Rule)

The plaintiffs argue any ban on abortion before fetal viability is unlawful, making H.B. 481 “plainly unconstitutional under binding precedent.” They note a federal judge in Kentucky barred enforcement of a similar heartbeat law in March.

Georgia’s law is also unconstitutionally vague, the plaintiffs say. The legislation amended the meaning of “natural person” in state law to include unborn fetuses at any stage of development. That change could create “uncertainty about what actions give rise to criminal and civil liability.” Laws can be struck down for vagueness if they fail to give fair notice as to what is illegal, or if ambiguous standards create the possibility of arbitrary enforcement.

Elsewhere in their brief, the plaintiffs warned that poor people of color are especially vulnerable to the burdens the law imposes.

“H.B. 481 will be particularly devastating for Georgians with low incomes, Georgians of color, and rural Georgians, who are already least able to access medical care, and who have the fewest resources to navigate the law’s cruelties,” the plaintiffs wrote.

Lawyers for Georgia counter that the law is not a categorical ban on abortions after six weeks. Depending on the unique circumstances of a pregnancy and the instruments a physician uses, heartbeats may not be perceived until 12 weeks. What’s more, the law provides several exceptions.

Nor is it true that all pre-viability abortion bans are unconstitutional, the state says. For example, in 2007 the Supreme Court upheld a categorical ban on partial birth abortions at any point in a pregnancy. In that case, the Court recognized the state’s interest in protecting the medical profession’s reputation by prohibiting grisly abortion procedures. Georgia says that same interest is in play here.

The Supreme Court has likewise recognized the state’s interest in promoting life, Georgia stresses, though the justices have offered “little guidance on the precise contours of that interest.”

“The act advances Georgia’s unique and substantial constitutional interest in protecting unborn human lives, in addition to its interests in protecting maternal health, encouraging childbirth, and safeguarding the integrity of the medical profession,” Georgia lawyers wrote in a filing opposing SisterSong’s motion for a preliminary injunction. 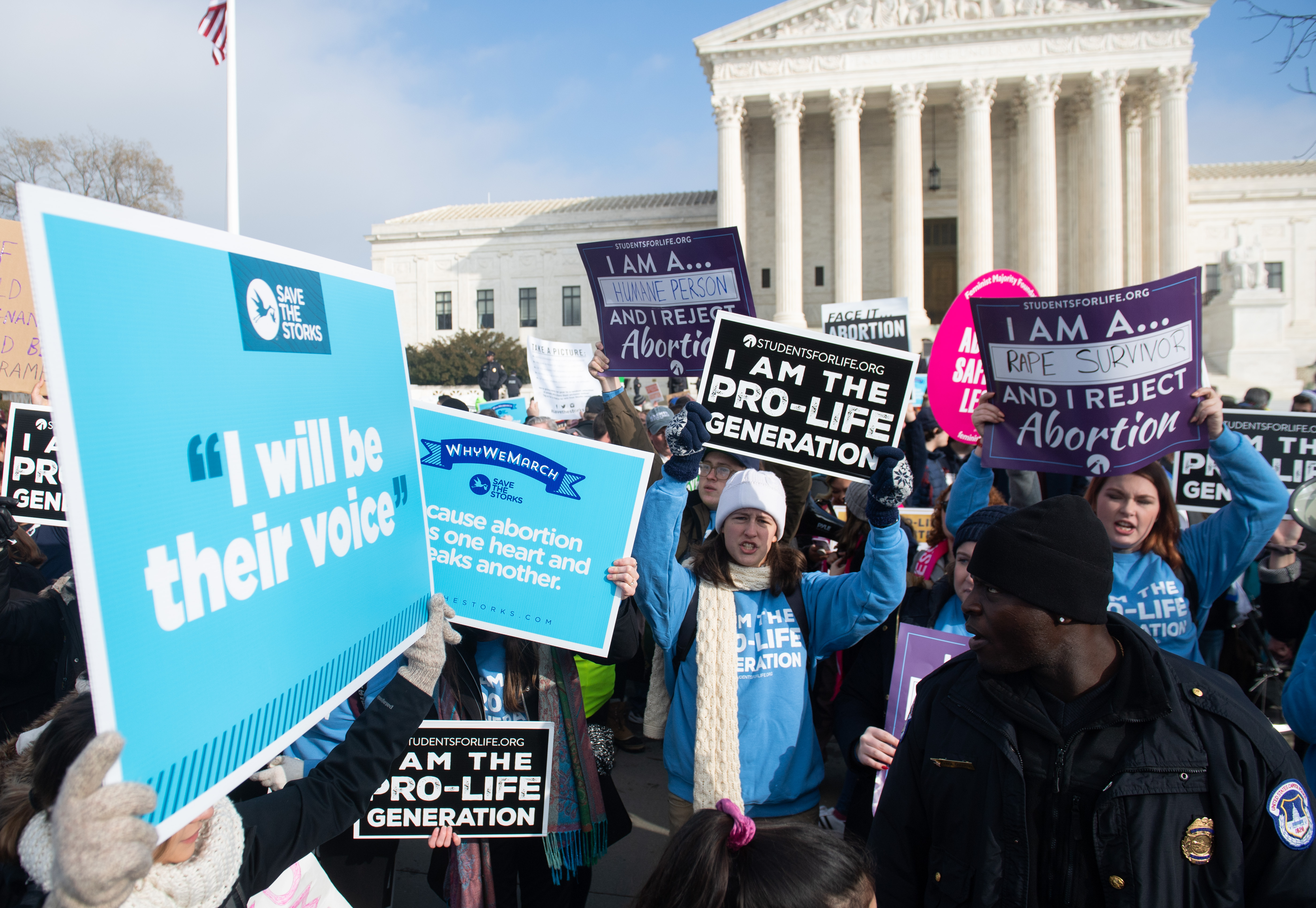 Pro-life activists participate in the March for Life on January 18, 2019. (Saul Loeb/AFP/Getty Images)

The bill will go into effect January 1, 2020, and makes exceptions in cases of rape or incest, or if the health of the mother is at risk. A police report must first be filed in the case of rape or incest.

Republican Alabama Gov. Kay Ivey signed H.B. 314 into law on May 14, only a week after Georgia’s legislation passed. The Alabama law, which will take effect six months from the date of signing, is the most restrictive abortion law in the United States and is a near-total ban on abortions. The law makes no exceptions for cases of rape or incest but would make an exception if the mother’s health was in serious danger.

The Georgia matter is pending before U.S. District Judge Steve Jones. The case is SisterSong Women of Color Reproductive Justice Collective v. Kemp in the U.S. District Court for the Northern District of Georgia.