Whether the Alabama law will even reach the Supreme Court on the merits is an open question, though there are two abortion controversies from Indiana and Louisiana on which the justices may act in the coming months.

Vice President Mike Pence signed a battery of abortion regulations into law during his tenure as governor of Indiana. Those mandates require women to have an ultrasound 18 hours before terminating a pregnancy, compel medical professionals to cremate or bury fetal remains, and ban abortions on the basis of sex, race, or disability.

The full 7th Circuit elected to review the panel ruling in June 2018, but reversed course after Judge Michael Scudder recused himself from the matter. Scudder’s recusal left the court evenly divided, so the decision was upheld.

That result drew a dissent from Judge Frank Easterbrook, who was skeptical that current precedent forbids the Indiana ban on trait selective abortions. He was more direct with the fetal remains requirements, criticizing the court for striking down those rules under a highly permissive legal standard.

The panel said Indiana had not identified a rational basis for those regulations, since fetuses do not qualify as human beings and thus cannot be regulated like persons under law. (RELATED: Trump Administration Will Challenge Nationwide Injunctions At Supreme Court)

“Simply put, the law does not recognize that an aborted fetus is a person,” the decision reads. “As such, the state’s interest in requiring abortion providers to dispose of aborted fetuses in the same manner as human remains is not legitimate.”

Easterbrook countered that state regulations of non-human life are quite ordinary, citing animal welfare laws as an example.

“Think of animal-welfare statutes,” Easterbrook wrote. “Dogs may not be beaten for fun. Bullfights are forbidden. Horses may not be slaughtered in Illinois for the dinner table under a statute this circuit sustained largely on animal-welfare grounds. The panel has held invalid a statute that would be sustained had it concerned the remains of cats or gerbils.”

The dispute reached the high court in October 2018. The justices were first scheduled to discuss the petition in January. Since then, they’ve deferred action on the petition more than a dozen times. That move could indicate that they are intentionally pushing the case to next term. Some court-watchers believe the justices are ducking controversial disputes in the aftermath of Justice Brett Kavanaugh’s contentious confirmation. 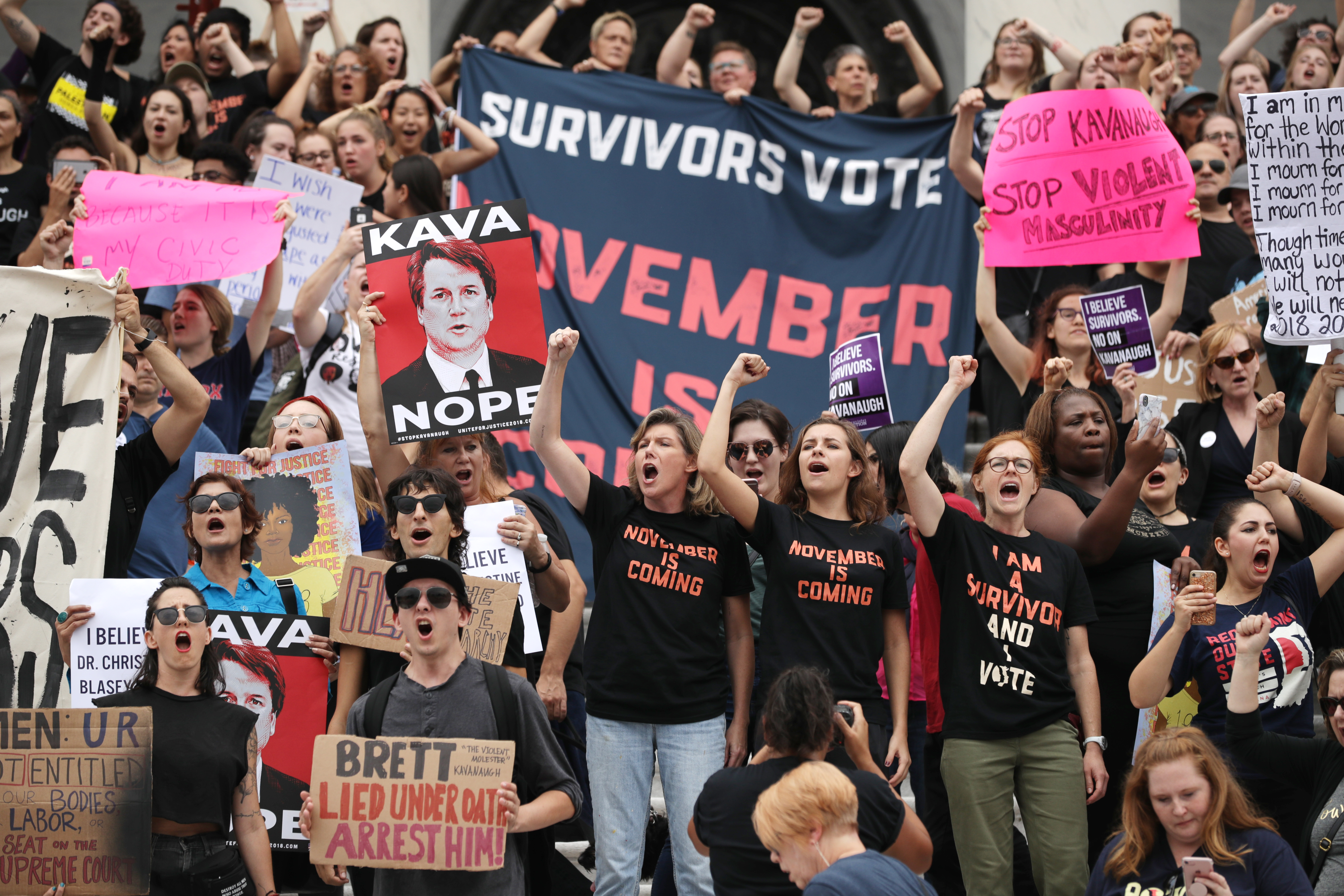 Hundreds of protesters occupy the east front of the U.S. Capitol to demonstrate against the confirmation of Justice Brett Kavanaugh on October 06, 2018. (Chip Somodevilla/Getty Images)

The delays might also mean that a justice is working on a dissent from the Court’s refusal to take the case.

The ultrasound challenge did not reach the Supreme Court until February, and has been deferred only twice. U.S. District Judge Tanya Walton Pratt temporarily blocked the ultrasound rules from taking effect. The 7th Circuit affirmed that decision in July 2018. A decision as to whether the justices will hear these cases could come as soon as Monday. The cases are Nos. 18-483 and 18-1019 Box v. Planned Parenthood of Indiana and Kentucky.

The justices will also grapple with a Louisiana law called the Unsafe Abortion Protection Act or Act 620. The measure provides that physicians who perform abortions must have admitting privileges at a nearby hospital. Abortion advocates say the law is identical to a Texas regulation the Supreme Court struck down in a 2016 case called Whole Women’s Health v. Hellerstedt.

Though U.S. District Judge John W. deGravelles blocked enforcement of the law, the 5th U.S. Circuit Court of Appeals reversed and said the law could be implemented. That prompted a last-second appeal from abortion providers to the Supreme Court.

The justices reversed the 5th Circuit on Feb. 7 and temporarily blocked the law from taking effect on a 5-4 vote, with Chief Justice John Roberts joining the liberal bloc. The law will not be in force while the lawsuit proceeds through the courts. (RELATED: Democratic Efforts To Expand The Supreme Court Just Hit A Big Wall: Public Opinion)

Opponents of the law style it a stealth measure to end abortion in Louisiana, claiming it will leave just one abortion provider in the state. In the 2016 Hellerstedt case, a five-member majority led by Justice Stephen Breyer found Texas’s admissions requirement did not provide a meaningful medical benefit for women, while imposing onerous regulations many clinics were unable to meet. As a result, many of the state’s 40 abortion clinics closed. The high court’s 1992 Planned Parenthood v. Casey decision forbids “undue burdens” on abortion access.

Pro-choice activists fear a similar outcome in Louisiana, which has three facilities where pregnancies are terminated. About 10,000 abortions are performed in Louisiana per year, according to the Guttmacher Institute.

Supporters of the law say it will increase standards of care, ensuring abortions are conducted as safely as surgeries. The 5th Circuit said Act 620 was distinguishable from the Texas law for a number of reasons. For example, some Texas physicians had difficultly obtaining admissions rights because of stringent state rules. In Louisiana, on the other hand, the panel found that the providers did not make good-faith efforts to obtain privileges.

Louisiana abortion providers filed their petition for review at the high court April 17. Louisiana’s response is due by July 19. The case is No. 18-1323 June Medical Services v. Gee.