Michigan’s environmental agency issued a violation notice to Flint in August and said the Michigan city has not done basic testing of its water for lead levels.

“The city of Flint (City) is in violation of the Safe Drinking Water Act” because it has not properly tested its water and reported the results, the state said in an Aug. 16 letter from Michigan’s Department of Environment, Great Lakes and Energy (EGLE). The letter was from EGLE’s water director to Flint’s director of public works.

“The City was out of compliance on July 1, 2019. To return to compliance, the City must collect samples from 60 confirmed Tier 1 sites … have them analyzed for lead and copper; and submit the analysis reports to” EGLE, said the letter obtained Daily Caller News Foundation.

The letter said EGLE previously gave the city 14 days to respond, but that it did not. “There is no fine for this violation; however, failure to conduct monitoring, as required during the second six-month round of 2019, will result in a fine of $1,000 per day,” the letter said. 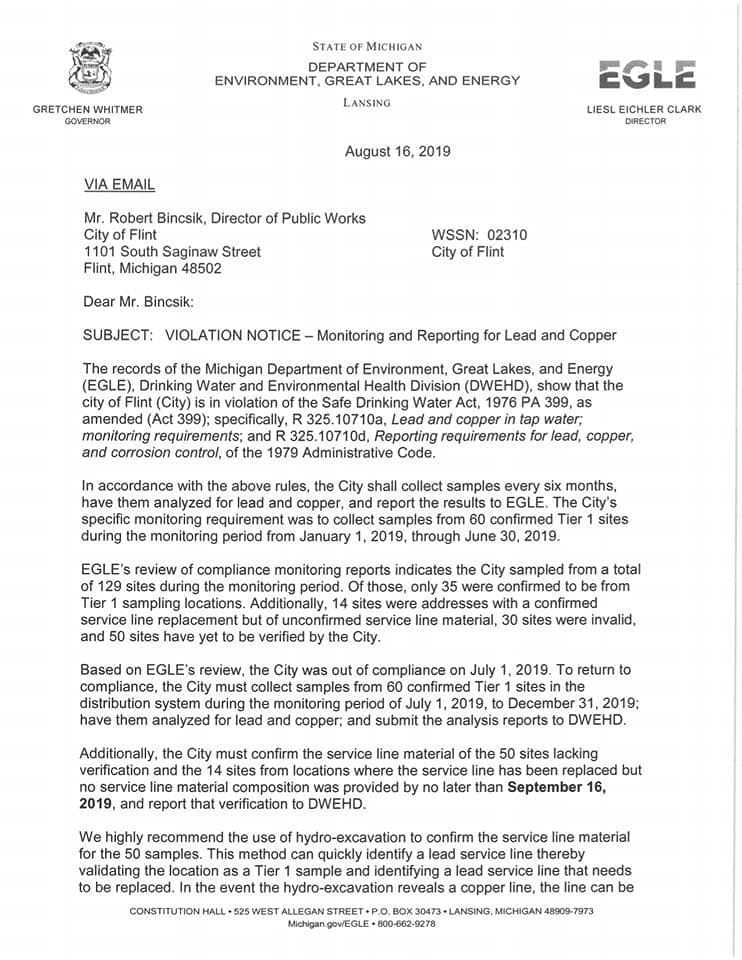 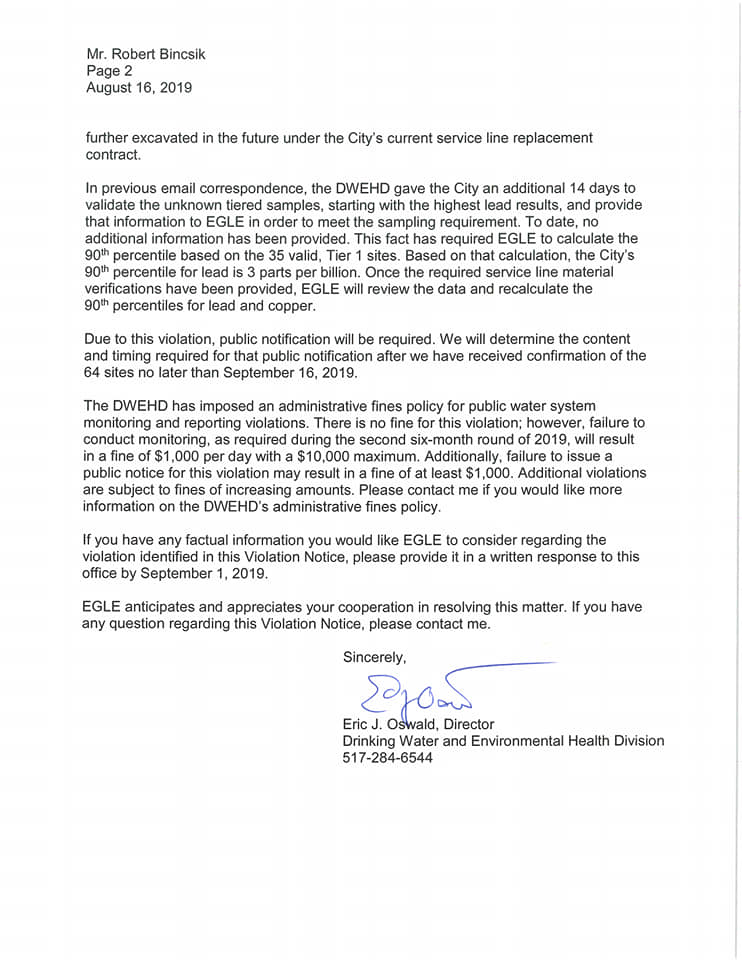 In addition to not testing many sites, the city did not specify if the tests it did submit were from areas with lead pipes or not, making the results useless, it said.

The violation notice comes as Democratic politicians frequently cite Flint as a victim of the national Republican Party, or a lack of investment in infrastructure spending. CNN has quoted Democratic Mayor Karen Weaver as a water expert.

The city of fewer than 100,000 has collected more than $647 million in state and federal aid since the water crisis began in 2014 for what is often described as a public health emergency. But when the money reaches City Hall, officials have repeatedly made decisions that have severely slowed the progress of fixing the water pipes and raised persistent allegations of bid-rigging and corruption.

Weaver is running for reelection with her handling of the lead cleanup her campaign centerpiece. She weighed in on lead problems in Newark, New Jersey, in an Aug. 13 press statement. “I immediately thought of all of the residents and how they were effected [sic] and what they must be feeling. … This is America and everyone within its borders deserve [sic] safe, affordable drinking water,” she said.

EGLE’s letter said, “Failure to issue a public notice for this violation may result in a fine of at lead $1,000.”

Weaver’s spokeswoman Candice Mushatt told the DCNF, “The City is working on a response to this letter, which will go out tomorrow. The City disagrees with the facts as stated in this letter as EGLE did not provide the City with the final approved sampling methods for 1st and 5th liter lead and copper sampling until March 22, 2019, three months into the monitoring period.”

She did not respond to questions about how the city had publicized that it has received a violation notice.

The state also slammed the city for blocking contractors from using a technique called hydro-vac, which quickly and cheaply digs narrow, targeted holes to check for the existence of lead pipes.

Mushatt did not say whether it would begin using hydro-excavation.

Council members and engineers believe the unusual prohibition was to make it possible for a politically connected firm called WT Stevens, owned by a former NBA player and which the mayor’s allies have bragged about helping, to compete even though it had no experience in the work and did not have the appropriate equipment to dig holes efficiently.

As a result, entire front yards, sidewalks and streets have been needlessly torn up, they said. The vast majority of homes whose yards were dug up didn’t even have lead pipes, and a map said so, but was ignored.

Initially, WT Stevens shared the work with Goyette Mechanical, an experienced, local and white-owned water works firm. But Goyette stood to complete the work, and fix the lead issue, quickly, while Stevens managed to dig far fewer holes, digging enormous and disruptive holes using a backhoe. The city banned contractors from using hydrovaccing in June 2018 and refused to overturn the move despite protestations by the state.

Separately, the city twice tried to rebid contracts after Goyette came in as the lowest bidder. Democratic City Councilman Allan Griggs called the WT Stevens move “more favoritism of the unqualified by the Administration.”

Art Woodson, a political activist and critic of corruption within Weaver’s administration, said Aonie Gilcreast, a landlord in the city who has become Weaver’s right-hand man, was steering the contract to WT Stevens. “Aonie Gilcreast and Mayor Weaver are bid-rigging. It’s just that simple,” he said.

Gilcreast ordered that an engineering supervisor with the company AECOM “should not wait until WT Stevens was finished with the replacements that they have been issued before giving them more addresses,” according to October 2018 meeting minutes. “He stated that AECOM would have trouble out of him if they didn’t issue WT Stevens more addresses,” the minutes continue.

Assigning addresses to WT Stevens when they were already backlogged, rather than letting a faster contractor fix them, meant that citizens of Flint would live with potentially contaminated water for longer.

A person secretly listened into a call when the DCNF previously asked Mushatt about WT Stevens. The person eventually unleashed an outburst and said his name was “Jesse Jesse” and “I don’t have a job title.” The voice sounded distinctly like Gilcreast.

The DCNF requested records showing the financial arrangement under which WT Stevens receives office space from the city, and Flint attempted to charge the news outlet $1,000 for the records.

The Weaver administration has refused to cooperate with the city council, leading even council member Eric Mays, a Democrat and previously staunch advocate of the mayor, to oppose the latest pro-WT Stevens move. Mays and a city official lashed out at each other with profane shouting at a recent council meeting. (RELATED: Flint Councilman Berates Muslim Reporter: ‘Nasty Woman. Maybe It’s A Cultural Difference’)

The city council gave Weaver a $37,000 raise to seven times the city’s average income in March.

Weaver is running for election against Democratic state Rep. Sheldon Neeley. Though Neeley is black, the mayor’s allies have used race to fend off criticism.