Gordon Sondlond, the U.S. ambassador to the European Union, plans to testify to the House under subpoena in the coming week about his knowledge of President Donald Trump’s actions toward Ukraine, which are part of a Democrat-led impeachment inquiry.

The State Department directed Sondland on Tuesday not to appear before a group of House committees leading the impeachment inquiry, which centers on whether Trump pressured Ukrainian President Volodymyr Zelensky to conduct politically charged investigations against Democrats.

“Notwithstanding the State Department’s current direction to not testify, Ambassador Sondland will honor the Committees’ subpoena, and he looks forward to testifying on Thursday,” Sondland’s lawyers said in a statement. “Ambassador Sondland has at all time acted with integrity and in the interests of the United States. He has no agenda apart from answering the Committees’ questions fully and truthfully.”

Sondland, who is said to be in frequent contact with Trump, was involved in negotiations to set up a meeting between Trump and Zelensky following a phone call they had July 25. The phone call is at the center of a CIA whistleblower’s complaint against Trump, which has fueled the Democrat-led impeachment push. (RELATED: Diplomats’ Texts Show Trump Used Leverage To Force Ukraine’s President To Open Investigations) 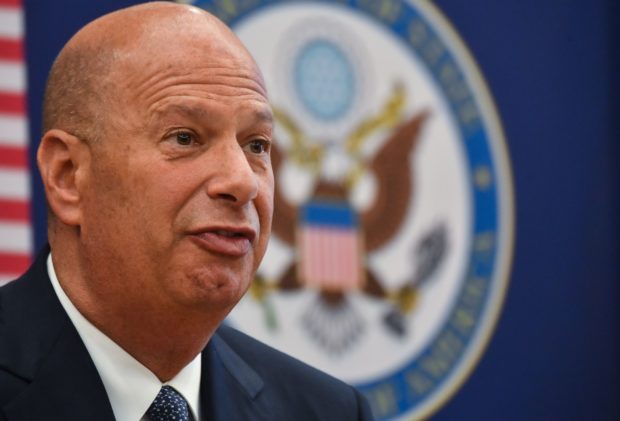 Gordon Sondland, the United States Ambassador to the European Union, addresses the media during a press conference at the US Embassy to Romania in Bucharest September 5, 2019. (DANIEL MIHAILESCU/AFP/Getty Images)

Sondland is likely able to provide insight into whether the Trump administration withheld military aid to Ukraine in exchange for investigations favored by Trump. In the July 25 phone call, Trump asked Zelensky to investigate Ukraine’s activities in the 2016 U.S. election, as well as whether Joe Biden intervened in 2016 on behalf of a Ukrainian energy company that had his son, Hunter, as a board member.

Trump has denied pressuring Zelensky to open the investigations, and that he withheld military aid in order to force his hand. Zelensky said Wednesday that “there was no blackmail” during the call.

Wisconsin Sen. Ron Johnson, a Republican, told The Wall Street Journal on Oct. 4 that Sondland told him Aug. 30 Trump was withholding the aid as a bargaining chip to force Ukraine to open the investigations.

Johnson recalled that Sondland said if Zelensky would appoint a prosecutor to “get to the bottom of what happened in 2016 — if President Trump has that confidence, then he’ll release the military spending.”

Johnson said he “winced” at Sondland’s remark. But he said when he confronted Trump the next day with what Sondland had told him, Trump vehemently denied blocking aid for that reason.

“He said, [Expletive deleted] — No way. I would never do that. Who told you that?” Johnson recalled to TheWSJ.

On Sept. 9, Sondland denied in a text message to another diplomat, Bill Taylor, that there was a quid pro quo involving aid to Ukraine.

“As I said on the phone, I think it’s crazy to withhold security assistance for help with a political campaign,” Taylor, the charge d’affairs to Ukraine, wrote in a text message to Sondland.

“The President has been crystal clear no quid pro quo’s [sic] of any kind. The President is trying to evaluate whether Ukraine is truly going to adopt the transparency and reforms that President Zelensky promised during his campaign,” he wrote.

Kurt Volker, the former special envoy to Ukraine, testified on Oct. 3 that he did not witness a quid pro quo involving military aid. He also said that he did not believe that Trump’s wish for Ukrainian investigations was linked to the security assistance.

Volker, Sondland and Taylor’s text messages did indicate that Trump was using a face-to-face meeting with Zelensky to force Ukraine to open the investigations.

“Heard from White House — assuming President Z convinces trump he will investigate / ‘get to the bottom of what happened’ in 2016, we will nail down date for visit to Washington,” Volker wrote in a July 25 text message.