A Pakistani-born Canadian Muslim hockey coach’s story about being the victim of a racist text from the father of one of his players is beginning to unravel as the facility he claims to have coached at denies knowing him.

Talha Javaid, a 23-year-old hockey player and coach from Windsor, Ontario, claimed he regularly drove across the border to nearby East Lansing, Michigan, to coach free hockey clinics, according to WILX. On October 9, however, he allegedly received a hateful text message from “Chase,” the father of a player named “Riley,” asking him to “consider resigning.”

“I’m not racist or anything but I don’t feel comfortable with you teaching him and the influence you will have on him,” the text read. “It’s hockey right? It makes more sense if it’s not some Muslim guy teaching it. If it were cricket or something that would be different but it’s not.”

Javaid took to Twitter two days later with snips of both the text message and his purported response. Andy Ngo of The Post Millenial posted a screengrab of the tweet, which has since been blocked from outside viewing. 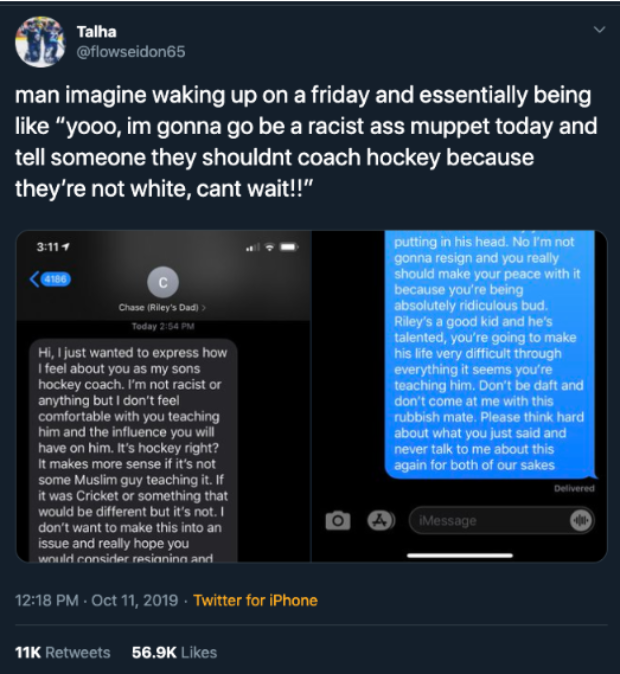 The tweet went viral, with thousands of retweets and likes, even garnering the attention of Hall of Fame goalie Grant Fuhr and black hockey player Evander Kane, among others.

There are no words for a moron like that. https://t.co/01CmxG7DmM

And they try to convince us racism doesn’t exist anymore or in hockey. Keep coaching and doing your thing because sooner rather than later there will be a lot more people in all areas of hockey that look different then the “traditional way”. https://t.co/YV87I9saw0

Javaid said he is overwhelmed by the amount of support he has received and appreciated the solidarity. He noted that his non-PoC friends were aghast and surprised by the incident. Javaid told them he’s used to it — something they found difficult to accept. But the reality is that often when people of colour share their stories, it serves, teaches and educates others with privilege who do not know what it’s like to be on the receiving end of abuse or discrimination.

However, Javaid’s story began to unravel when a reporter with NBC affiliate WILX asked Yahoo Sports for the identity of the rink where Javaid claimed to coach, which turned out to be Suburban Ice in East Lansing, Michigan. Yet, when contacted, the facility told WILX off camera that they “have never heard of Javaid nor the ice skating clinic he allegedly was holding,” the outlet reported. (RELATED: Reason Editor Explains How Hate Crime Statistics Are Misrepresented, Gives Shocking Guess On How Many Are Actually Real)

The Post Millennial also contacted the facility and received a negative response.

“We’ve never heard of him,” a staff person said. “He never taught here. He had no ties to Suburban Ice whatsoever.”

The Post Millennial pointed out another instance, in September 2017, when Javaid allegedly received a racist message after leaving an ice rink.

In Sep. 2017, he said he found a note on his car after leaving the Tecumseh Arena that read: “Stop coming to the rink! (Expletive, expletive) Muslim! Go Home! Make Canada Great Again. MAGA. MCGA.” He posted a photo of the note on Twitter and spoke to the media. A suspect was never identified.