A cabinet secretary sent a letter to a major union saying he’s concerned about workers’ safety after “a culture of sexual harassment” was allegedly rampant at the American Federation of Government Employees’ national headquarters.

Robert Wilkie, the secretary of the Department of Veterans Affairs, wrote Thursday in the letter: “In light of recent events at your organization and the lack of information about how deep this problem goes, I am writing to get your personal and public assurance that you will protect VA employees who are members of your union from any form of harassment by union officials, while thoroughly investigation all allegations of impropert behavior. VA spends considerable time and resources making sure its working environment is fair, inclusive, and psycohologically safe for all, and it is important to us that the valued members of our team who complain about sexual harassment are not frustrated, neglected, or ignored by AFGE leadership.”

Those including his 31-year old male former communications director, Brett Copeland, who said during a business meeting in Palm Springs, California in 2017, Cox stuck his tongue in Copeland’s ear and attempted to lure him to a jacuzzi.

Cox denied the allegations in a letter Oct. 27, saying “I am truly sorry if I ever made anyone feel uncomfortable [but] I cannot abide lies and scurrilous, politically-motivated attacks. I am a lifelong defender of due process and trust the investigation will sort the fact from fiction.” (RELATED: With Help Of Union, VA Worker Gets Job Back Despite Armed Robbery Charge)

Bloomberg reported on Nov. 14: “People in positions of power at AFGE have failed for years to deal with complaints about inappropriate behavior, bullying or bias, leaving workers and union members frustrated and anxious, dozens of current and former staff and members say.”

“The alleged misconduct by Cox was just the highest-profile example of the yawning gap between the organization’s public persona as a champion of worker rights and the way it treated its own people, says Caniesha Washington,” Bloomberg reported. Washington was an official with an internal union that represented AFGE employees against union management.

Suzanne Sapp-Snurpus, a former AFGE employee, told Bloomberg it was well-known that the AFGE general counsel’s office shrugged off complaints about workplace harassment.

Amber Westbrook, a former union member, said her local union president told her sex was the way to get ahead in the union, and demanded adjoining hotel rooms at a conference, Bloomberg reported. She said she reported it to the general counsel, to no effect. 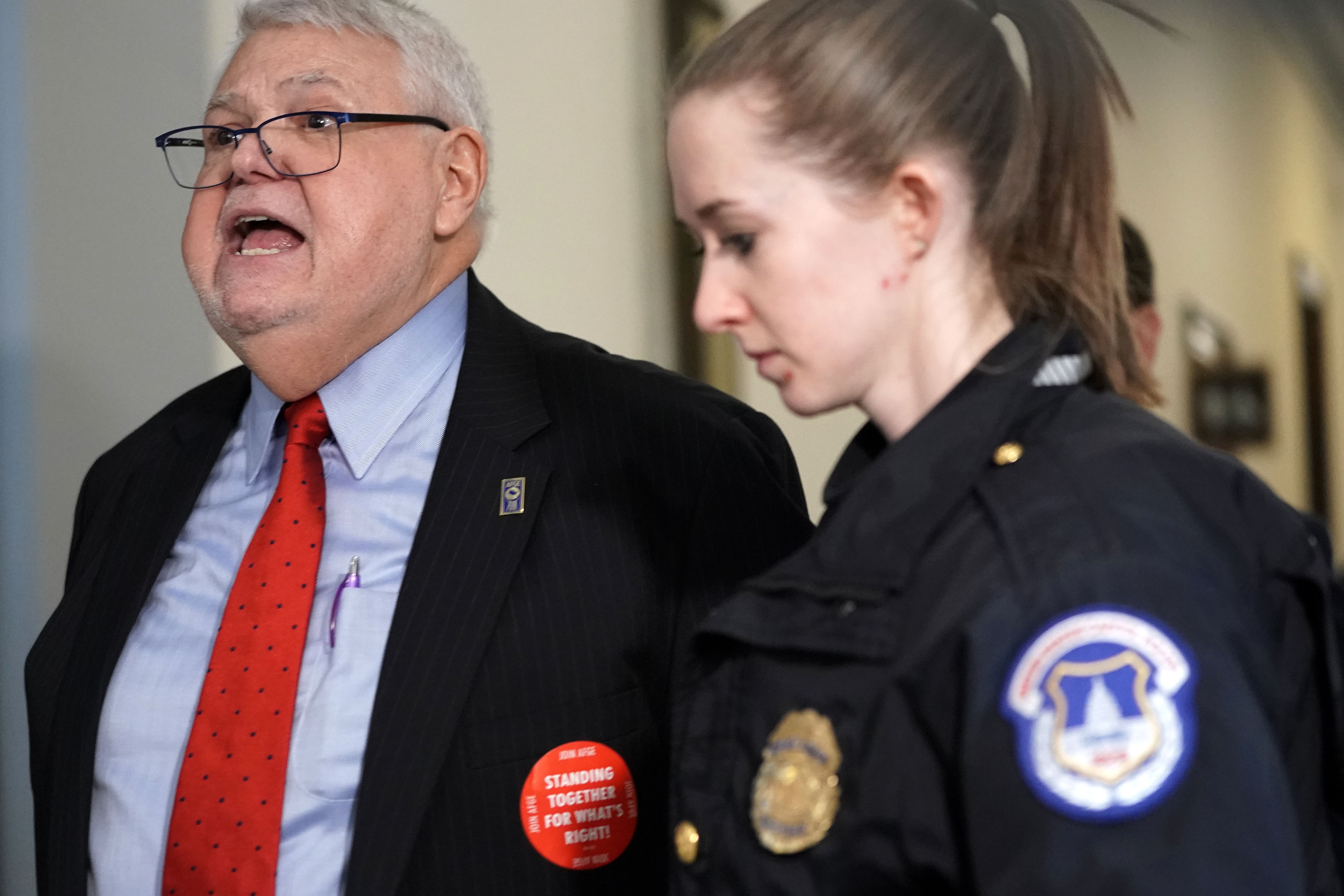 J. David Cox, president of the American Federation of Government Employees (AFGE), is led away by a member of U.S. Capitol Police while protesting the government shutdown on January 23, 2019. (Alex Wong/Getty Images)

Rocky Kabir, Cox’s former secretary, said he repeatedly reported incidents such as Cox encouraging him to be open to having sex with men, asking him to shower with him, and touching his face.

He said AFGE’s public policy director, Jacque Simon, did nothing when he reported it.

He resigned and complained again, and Cox then tried to have Kabir investigated for age discrimination, after complining about the 68-year old Cox.

Wilkie, whose agency houses the largest AFGE section, said “AFGE represents 260,000 employees at the Department of Veterans Affairs (VA), and VA takes very seriously the problem of sexual harassment as well as other actions that create a hostile work environment. Our efforts should be bolstered by AFGE, which has long claimed to have an interest in protecting the rights of workers.”

Cox has led the union since 2012. In 2016, Cox threatened to “whoop” then-VA Secretary Robert McDonald’s “ass” and called then-House Veterans’ Affairs Committee Chairman Jeff Miller, a Florida Republican, “a fool,” in part for pushing for legislation to make it easier to fire VA workers for misconduct.

On Nov. 15, Wilkie cracked down on union officials using taxpayer money to do labor organizing, telling AFGE that it “will be required to vacate or pay rent for the use of VA office space and equipment that they previously used for free. Further, VA employees who serve as union representatives are now expected to spend at least 75 percent of their paid time performing VA business.”

In January, during a budget crisis-induced partial government shutdown that kept some nonessential workers at home, an AFGE official said politicians must restore their salaries or else veterans who worked in the federal government would kill themselves.

That triggered a furious letter from Wilkie to Cox, who said AFGE was promoting false stereotypes and exploiting “the real tragedy of Veteran suicide to make political arguments about the partial Government shutdown.”