The Federal Bureau of Investigation’s reputation has been ravaged this month by the inspector general report that proved that the FBI deceived the Foreign Intelligence Surveillance Court to secretly spy on a Trump campaign official.

Even fired FBI chief James Comey was forced to admit that “I was wrong” in a Fox News interview Sunday regarding the FBI’s abuse of Carter Page. The Russiagate controversy could not have occurred unless much of the American media docilely recited the false charges that FBI officials fed them. A stunning new movie on Richard Jewell is a reminder that this is not the first time that collusion between the feds and the media destroyed the reputation of innocent Americans.

The Atlanta Journal-Constitution is outraged that Clint Eastwood’s new movie portrays its star reporter Kathy Scruggs as sleeping with her FBI source, but there is no question that Scruggs screwed the hell out of Jewell. The movie vividly portrays how the FBI shoveled false information to journalists who rushed to condemn the 33-year-old security guard who saved many lives by discovering a pipe bomb that had been placed in a crowded venue during the 1996 Olympic games in Atlanta. When he died in 2007 at age 44, his New York Times obituary was headlined: “Richard Jewell, Hero of Atlanta Attack, Dies.” But his heroism revived only after the FBI and the media sought to destroy him. (RELATED: REVIEW: ‘Richard Jewell’ Is The Best Movie Of 2019) 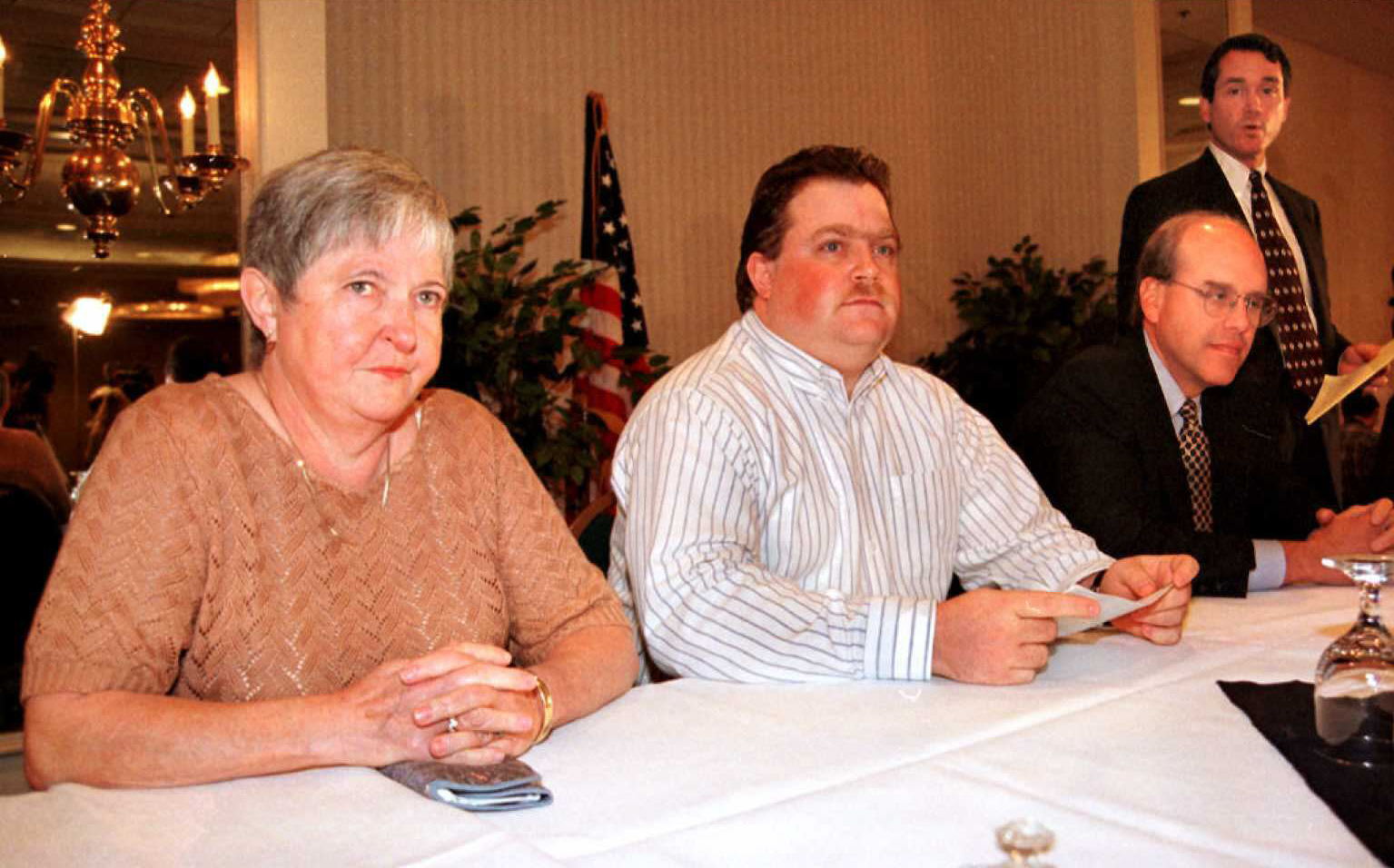 After suspecting that Jewell had planted the bomb he discovered, FBI agents lured him to their Atlanta office and asked him to help them make a training film about detecting bombs. The ruse allowed the agents to question Jewell extensively without reading him a Miranda warning notifying him that anything he said could be used against him. FBI leaks tagging Jewell led to 88 days of Jewell’s life and reputation dragged in the gutter day after day. The FBI did nothing to curb the media harassment of Jewell long after it had recognized that he was innocent, as I wrote in “Feeling Your Pain: The Explosion and Abuse of Government Power in the Clinton-Gore Years.”

A Justice Department investigation concluded that the FBI’s training film charade violated Jewell’s constitutional rights. But in 1997 Senate testimony, FBI chief Louis Freeh denied that Jewell’s rights were violated because he did not incriminate himself. Who knew that only guilty citizens have constitutional rights? Freeh did tell the Senate committee that he had instructed FBI agents “not to use deceptive ploys in getting people to waive their constitutional rights.” Freeh’s order was merely aspirational and did not prevent a tsunami of FBI entrapment and other schemes, including the bogus briefing on Russia that FBI agents gave the Trump campaign, as the inspector general report revealed last week. (RELATED: Will Hurd: ‘Media Was Lied To’ About FISA Abuse, Steele Dossier)

By the summer of 2001, Jewell was no longer in the news but the name of the suspected Atlanta bomber, Eric Rudolph, remained on the FBI’s Top 10 Most Wanted list. I was vacationing in the mountains of western North Carolina and my then-spouse had the bright idea of going to some damn chalet inn she had seen in a tourist guidebook. The directions to the inn were lame and after roaming that zip code for half an hour, I pulled into a parking lot in front of a hardware store in Whittier to cuss and recheck the map. 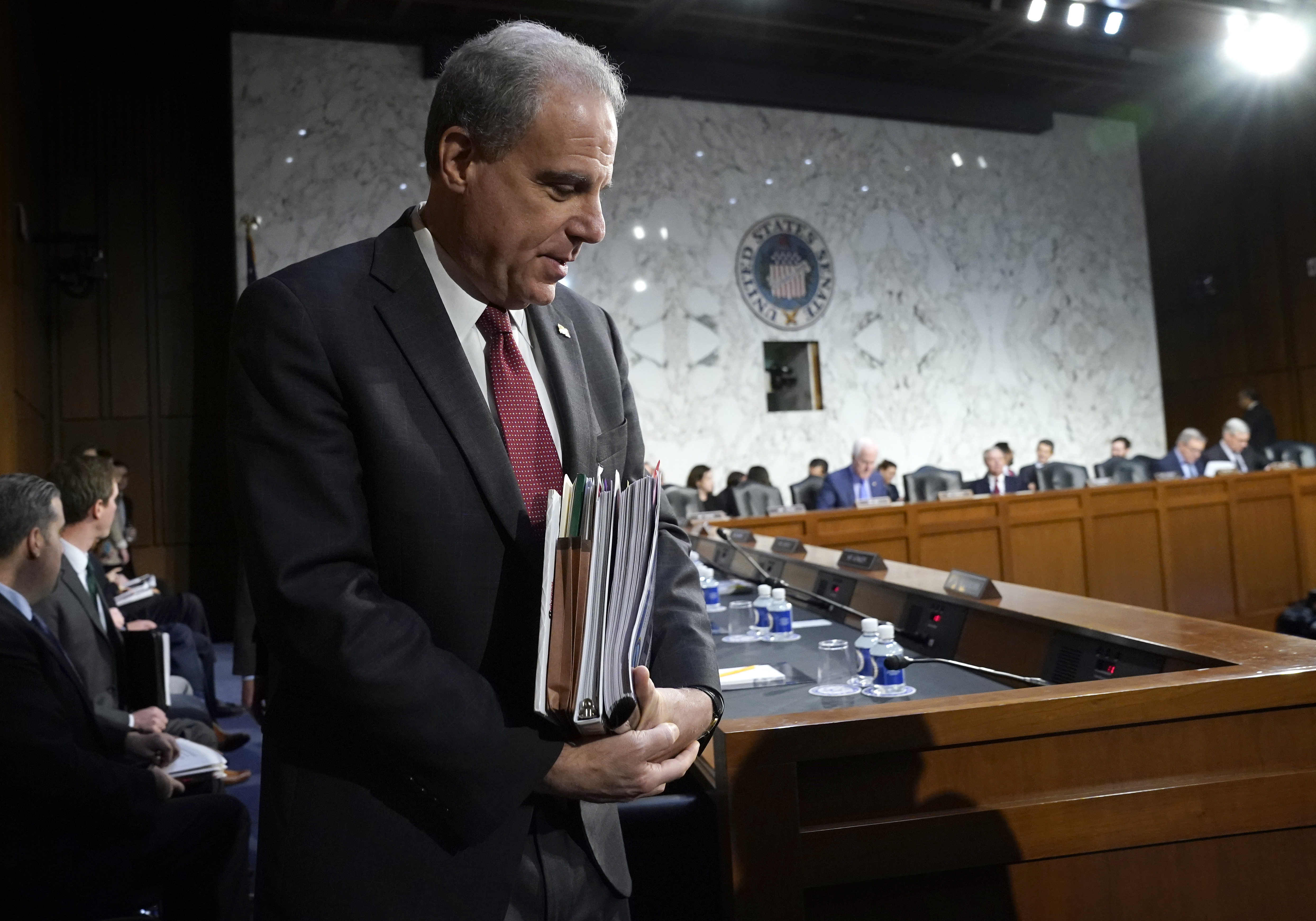 Michael Horowitz, inspector general for the Justice Department, returns for testimony following a short break before the Senate Judiciary Committee in the Hart Senate Office Building on December 11, 2019 in Washington, D.C. (Photo by Win McNamee/Getty Images)

I stepped out of my car and fired up a cheap cigar. Two minutes later, a big ol’ bald guy named Dennis came bounding out of the hardware store and asked in a booming voice: “What part of Maryland you from?”

“Rockville,” I replied. He started chatting me up at race-horse pace, telling me he was from Maryland, been living down here for twenty years, worked as a long-haul truck driver, and had lost $5,000 gambling last year at a nearby Cherokee Indian casino. I was raised in the mountains of Virginia so I wasn’t surprised by his palaver but something seemed amiss.

After about 15 minutes, he suddenly announced that he thought I was an undercover federal agent. Holy crap! With my scruffy beard, railroad cap, and “just a country boy” shtick, federal agencies often presume I’m a (harmless) redneck. And now the rednecks think I am a fed! I can’t get a break.

I asked Dennis why he suspected I was an undercover agent.

“Because you’re driving a black car with a Maryland license plate,” he replied without missing a beat.

Guilty on both counts — though I doubted that Ford Contours were standard undercover issue. I asked if there were other signs of federal agents.

“Ya — they have hidden tracking devices on the underside of the back of the car.”

“Feel free to check out my car.”

He and I walked to the back of my vehicle, he got down on his knees and pawed his big hands around the Ford’s underside and found no GPS tracker. After about a minute, he decided I wasn’t a G-man, got back up, and gave me a hearty handshake.

He explained that he’d been suspicious because the FBI had sent hundreds agents to that area to capture Eric Rudolph. The FBI arrived full of bluster, promising to speedily take down Rudolph. Dennis said many of his neighbors came to despise the FBI because they were heavy-handed and condescending. He said they showed up at a motel and decided to take it over; agents went around banging on doors and threw every guest out on the spot. Dennis had heard that some restaurants refused to serve FBI agents — insisting that they leave their guns outside, knowing they couldn’t do that.

The feds pulled out all their tricks to nail Rudolph. Blue Ridge Outdoors noted that the FBI came in “with bloodhounds, electronic motion detectors, and heat-sensing helicopters. They set up listing posts with cameras and hired local scouts to tromp through the woods with gridded maps,” as well as putting a million dollar bounty on Rudolph. The FBI got nothing. The Los Angeles Times reported that Rudolph became “a local folk figure, earning him minor tributes on posters, bumper stickers and T-shirts bearing slogans like ‘Eric Rudolph Ate Here’ and ‘Eric Rudolph: 1998 Hide and Seek Champion.’”

Patrick Crosby, the spokesman for the federal task force, whined, “It’s incredibly difficult. You can’t see squat, and there are sudden cliffs and rocks, and you could get shot or blown up at any time. It’s hot as hell during the day and cold as hell at night. And once you’re in the woods, all bets are off. This is a guy who plants bombs … and now you’re on his turf.” The poor darlings. (RELATED: Clint Eastwood Is Making A Movie About The Atlanta Olympics Bombing Titled ‘The Ballad of Richard Jewell’) 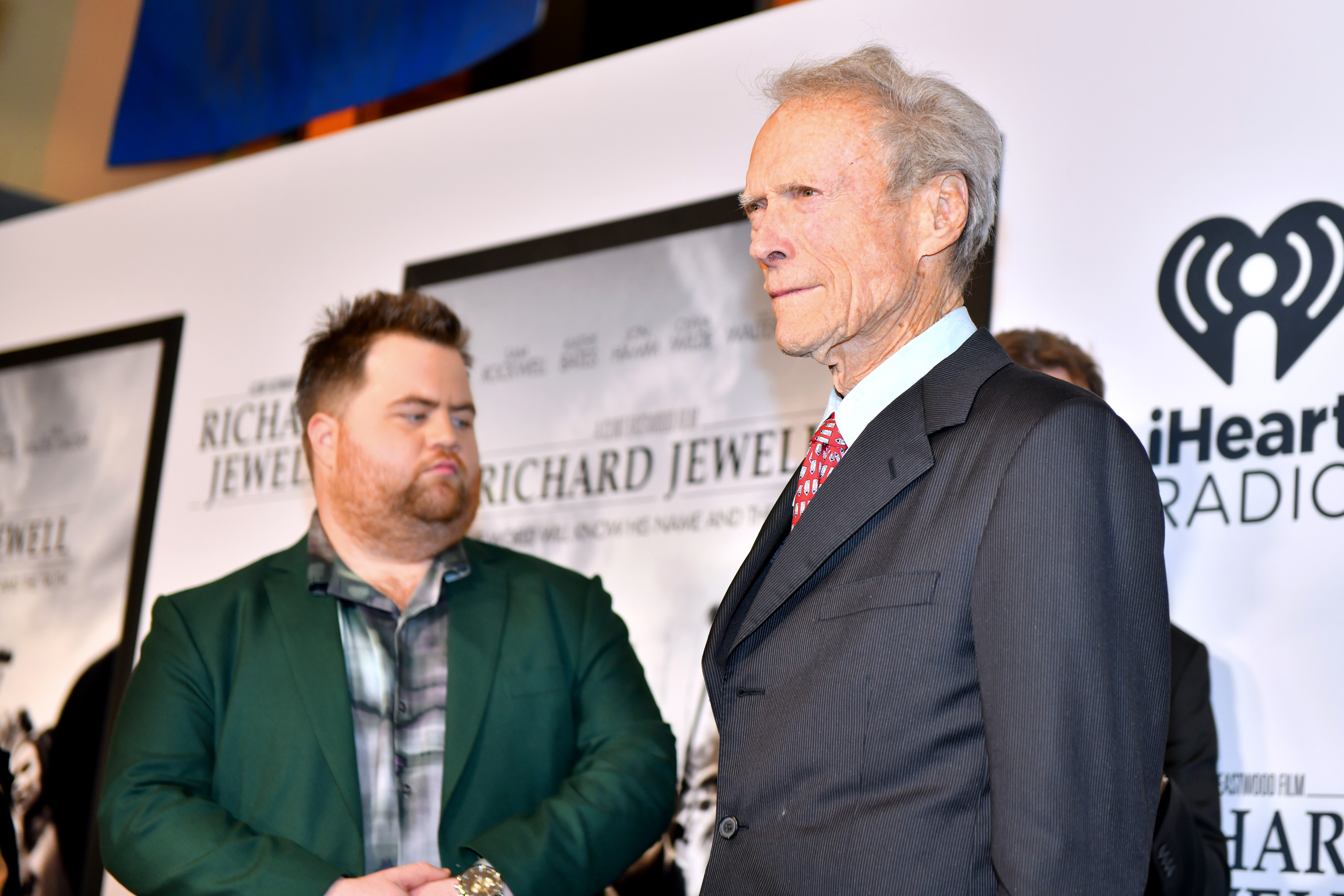 Dennis became more at ease when I mentioned that I’d written about federal abuses at Waco and Ruby Ridge and had been publicly denounced by Freeh. I’m not sure he believed that last point, but he was far better informed on the details of FBI misconduct in those cases than was the typical Washington journalist who happily printed whatever hooey FBI agents fed them. We chatted for two hours outside that hardware store before Dennis invited me to spend the night at his house. I thanked him for the invite but said I wanted to head on to Asheville to hear some great fiddling.

Eric Rudolph was finally captured in 2003 by a local policeman in a small town about an hour from that hardware store. He pleaded guilty to the Atlanta bombing as well as multiple bombings of abortion clinics and a lesbian nightclub; he is now serving a life sentence in federal prison. Shortly after Rudolph was apprehended after more than four years in the mountains, the U.K. Independent pointed out that prior attempts to nail him illustrated “all the shortcomings of a hi-tech, militarized federal force unable to negotiate such alien, not to say hostile, territory.”

That was the lesson I took from Dennis and his story of FBI failures in his neck of the woods. FBI bosses can swagger in Washington and receive reverential treatment in the nation’s media. But far beyond the big cities and the coastlines, federal authority hinges largely on the consent of local citizens. Just because rural residents are mostly peaceful doesn’t mean they will be docile to imperious outsiders. 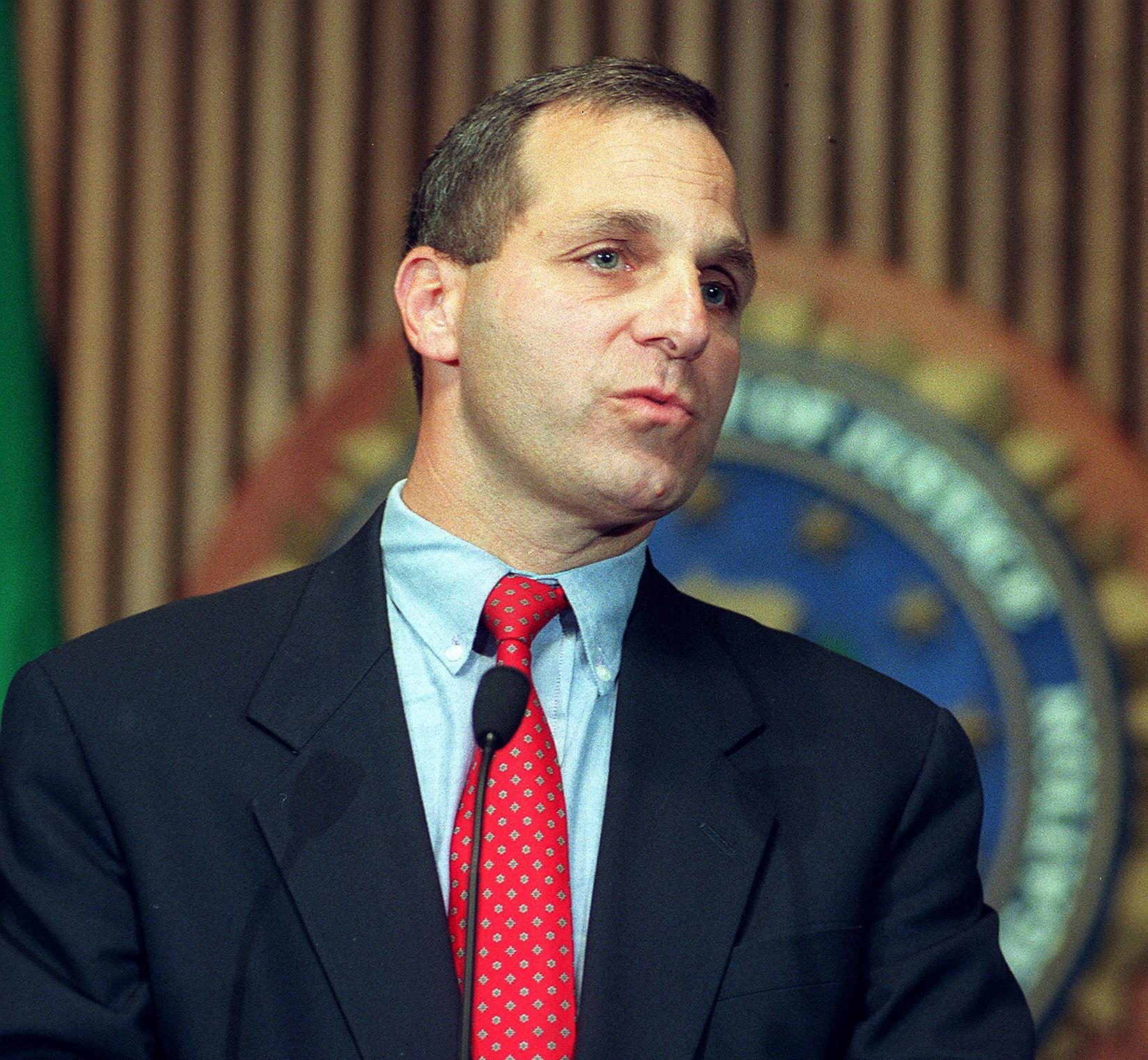 FBI Director Louis Freeh speaks to reporters during a press conference in August at the FBI Building in Washington, D.C. (Photo: GEORGE BRIDGES/AFP via Getty Images)

What would happen if, instead of fruitlessly seeking a single fugitive, a federal task force decides to seize all the AR-15 rifles in western North Carolina? The result would be like the classic bluegrass song about the revenooer who went up Rocky Top mountain and never came down. If innocent people were killed in the crackdowns on gun owners, the feds would likely have to contend with the long-range .50 caliber armor-piercing bullets from Barrett sniper rifles, developed by a Tennessee boy a few decades ago. At that point, it would not matter how many editorial pages and cable news channels cheered on the G-men and howled for the blood of those defying government commands. The game would be over. Federal jurisdiction in that swath of America would be as illusory as the Afghan government’s control over the mountains of Tora Bora.

The perils of proposed gun bans are playing out vividly in Virginia. The new Democratic majority in the state legislature is threatening sweeping gun bans and restrictions.  More than 70 local governments have preemptively responded by declaring themselves “Second Amendment sanctuaries.” At the Bob’s Big Boy in Pulaski County (300 miles from D.C.) where I ate breakfast Sunday morning, the sanctuary effort was a hot topic of conversation — as it is in much of rural Virginia. Democrats are ratcheting up the tension by suggesting the governor could send the National Guard to violently enforce whatever politicians in Richmond decree. Many of the urban Democratic politicians probably view the rural hunters the same way that the media viewed Richard Jewell, who was portrayed as a loser who owned too many guns for his own good. Hopefully both sides can calm down before any shots are fired.

The Washington Post, the hometown paper for the Deep State, is fretting that the Eastwood movie’s “vilification of reporters and the feds” amounts to “nearly a second railroading … of Jewell’s accusers.” But some FBI officials and some journalists deserved tarring for their abuse of Jewell. The media’s reflexive rallying around the FBI in the Jewell case is a warning sign of how difficult it will be to build support to rein in the FBI regardless of how many of its abuses are exposed.