Anti-Semitism has newfound acceptance in the left, where anti-Semites operate openly under the pretense of opposition to Israel, a report argued Monday.

Anti-Semites have positioned Jews as enemies of the most powerful forces of the era throughout history: as Christ-killers in Christian Europe, as an impure race in Nazi Germany and as capitalists in the Soviet Union, Zachor Legal Institute and StopAntisemitism.org said.

Today, the most powerful figure on the left is social justice or human rights, and the far-left on college campuses and a growing segment of politicians now position Jews and Israel as an enemy of Palestinians’ human rights, their 120-page report said.

The trope of the powerful, rich, Jewish influencer has helped enable some in the progressive left — which is fixated on boosting race-based underdogs against those with “privilege” — to adopt Palestinian rhetoric that positions Jews as modern-day Nazis, rather than one of history’s most victimized groups, it said.

Forty countries, including the U.S., have adopted a definition of anti-Semitism in which “anti-Zionism is effectively identified as a form of race and national-origin discrimination, alongside classic anti-Semitism,” it said.

The International Holocaust Remembrance Association (IHRA) drafted that “working definition,” but in places where it has been adopted, it does not yet have teeth, the report said.

FBI statistics show that the majority of religious hate crimes in the U.S. were anti-Jewish, despite Jews making up 2% of the population.

A 2019 study said Google searches for the Rothschild family, associated with ancient anti-Jewish conspiracy theories, rose 29% over the last three years in the United Kingdom.

The rise in anti-Semitism has coincided with a new wave of anti-Israel agitation around the Boycott, Divestment and Sanctions movement (BDS), which encourages groups in the U.S. and elsewhere to isolate and boycott Israel, the report said.

“Under the guise of legitimate concern for Palestinian human rights,” anti-Semitic leaders have created groups that have used otherwise-innocent leftists as unwitting pawns, it said.

The report says there is a slippery slope, a “process utilized by the delegitimization campaign to radicalize the discourse surrounding Israel from legitimate criticism, into delegitimization and finally blatant anti-Semitism.”

Those leaders of the “delegitimization campaign have found fertile ground on social media, college campuses, among social justice groups and in the most influential international bodies to promote their anti-Israel agenda. This humanitarian pretense affords the campaign’s leaders and prominent organizations the ability to express their anti-Semitic beliefs freely and perpetuate the radicalization of the discourse on Israel. As a result, individuals, albeit sometimes unknowingly, are used as pawns to promote hate and to lend legitimacy to what is, in fact, a radical anti-Semitic movement,” it said.

Canadian Prime Minister Justin Trudeau, French President Emmanuel Macron, the U.S. Congress and the Trump administration have said that BDS is rooted in, or a manifestation of, anti-Semitism, but those statements have come as a reaction to the prevalence of the movement fueled by a constellation of groups, the report said.

Anatomy of a movement

“The Boycott Divestment and Sanctions National Committee (BNC), the architect of the BDS movement, is a 28-member coalition, including at least five US and EU designated terror organizations, that supports and strengthens the delegitimization campaign worldwide,” the report said.

“The BNC has branded the Gaza strip as a ‘ghetto’ where Palestinians are ‘trapped’ as part of an effort to generate pressure on HSBC Bank and AXA Insurance to divest from Elbit Systems, an Israeli company. By using this term the BNC promotes the comparison of Israeli policy to that of the Nazis,” it said.

BNC did not return the Daily Caller News Foundation’s request for comment.

The analogy of Jews to Nazis is a recurring one among BDS activists, the report said.

Rep. Rashida Tlaib, a Michigan Democrat, argued against Congress’ anti-BDS bill by comparing it to Americans’ ability to boycott Nazi Germany. In January, Tlaib tweeted a picture of a map in her office in which Israel was crossed out.

BDS groups include the National Students for Justice in Palestine (NSJP) and the Palestinian Youth Movement (PYM). At a NSJP conference in 2018, PYM leader Mohammad Nabulsi led hundreds of students in a chant calling for “Intifada,” a call for death to Israelis, the report said. In November 2017, PYM-USA tweeted that “The Zionist entity has no ‘right to exist.’”

At a U.S. Campaign for Palestinian Rights (USPCR) event, Temple University professor Marc Lamont Hill criticized “non-violent” movements and said, “If I am going to do this [resist], I am going in Laila Khaled style,” referring to a terror operative who helped plan two plane hijackings.

In April, Democratic Minnesota Rep. Ilhan Omar retweeted Omar Suleiman, a speaker at American Muslims for Palestine conferences, saying Jesus was a Palestinian, which the report says is a false assertion that evokes the trope that Jews killed Jesus.

Perhaps the best-known BDS-linked group is the Council on American-Islamic Relations (CAIR). Hassan Shibly, the chief executive officer of CAIR Florida, tweeted in August 2014: “God as my wittiness, Israel & it’s supporters are enemies of God and humanity!”

Zahra Billoo, the executive director of the CAIR San Francisco Bay Area, tweeted in July 2010: “No need for a holocaust museum, seeing as Israel has taken it upon itself to recreate it.” The leftist Women’s March removed Billoo from its board in September over anti-Semitism, but Tlaib expressed support for her “sis.”

Omar previously served on a CAIR chapter’s advisory board and has received more than $5,000 from CAIR, the report said.

American Muslims for Palestine (AMP) funds and supports National Students for Justice in Palestine and has chapters in eight states, the report said. 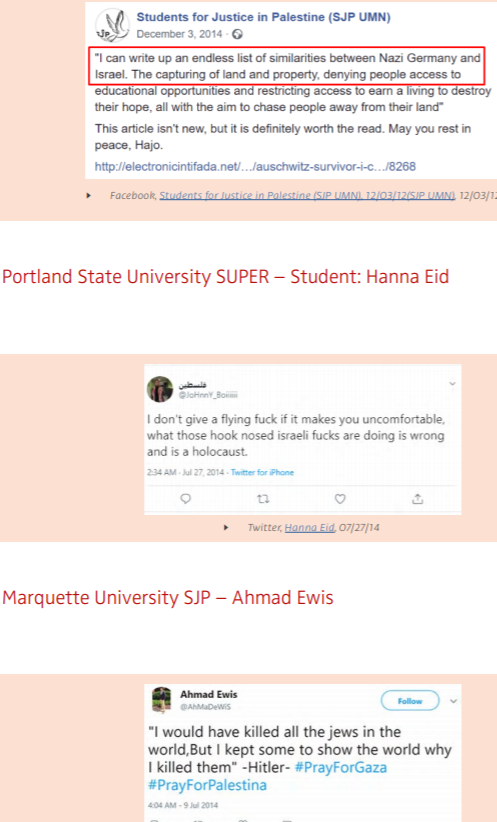 The growing segment of anti-Semitic groups on the left have found common ground with the far-right’s most fringe figures, the report said.

“In a philosophical twist, by radicalizing criticism of Israel into the realm of modern-day anti-Semitism, the perpetuators of the delegitimization campaign, including the self-styled, staunch, activists and defenders of human rights, find themselves sharing a common goal with white supremacists, fascists and the remnants of the neo-Nazi movement in Europe: the
hatred and demonization of Jews,” it said.

“The language of BDS and the far right is interchangeable,” author Melanie Phillips said, according to the report.

The Department of Education has made efforts to codify anti-Zionism as discrimination under Title VI of the Civil Rights Act, a move aimed at reining in a wave of vitriolic anti-Zionist agitation on college campuses. But these are reactive measures, and K-12 public education in America falls short on educating children about modern anti-Semitism, the report said. (RELATED: US Universities Took $600 Million Tied To Islamic Nations While Forming Grade School Curricula)

“The working definition should serve as the basis not only for public school education, but should be introduced as the measuring stick for the Department of Higher Education to approve Holocaust studies, Jewish history and relevant disciplines of study which touch on racism, intolerance and discrimination (i.e. Education, Sociology and Anthropology),” it said, adding:

“Moreover, Jewish History Week should be introduced as an observed educational week throughout public schools in order to provide an all-encompassing education of tolerance and appreciation for Jewish citizens. Until such changes are introduced, anti-Semitism will by and large remain an archaic concept of a bygone era that is to be remembered and not repeated, rather than recognized as a living phenomenon that is to be anticipated and extinguished.”

Marc Greendorfer, an author of the report, told the DCNF: “We’re very grateful for President [Donald] Trump’s leadership in confronting BDS and anti-Semitism and hope that Congress will set aside partisanship to unite in support of the president’s efforts to combat anti-Semitism.”