An NBC reporter deleted a tweet Sunday after falsely claiming that a Monday gun rights event in Virginia was a “white supremacist rally.”

In a now-deleted tweet, NBC’s Ben Collins urged reporters ahead of the 2nd Amendment rally to “verify information” before sending it out. Collins deleted and then clarified his tweet following backlash for referring to the event as a “white supremacist rally.”

Monday’s rally was organized by Virginia Citizens Defense League (VCDL), a non-profit pro-2nd Amendment group, not by white supremacists. They have urged for a “peaceful” event, NBC News previously reported. 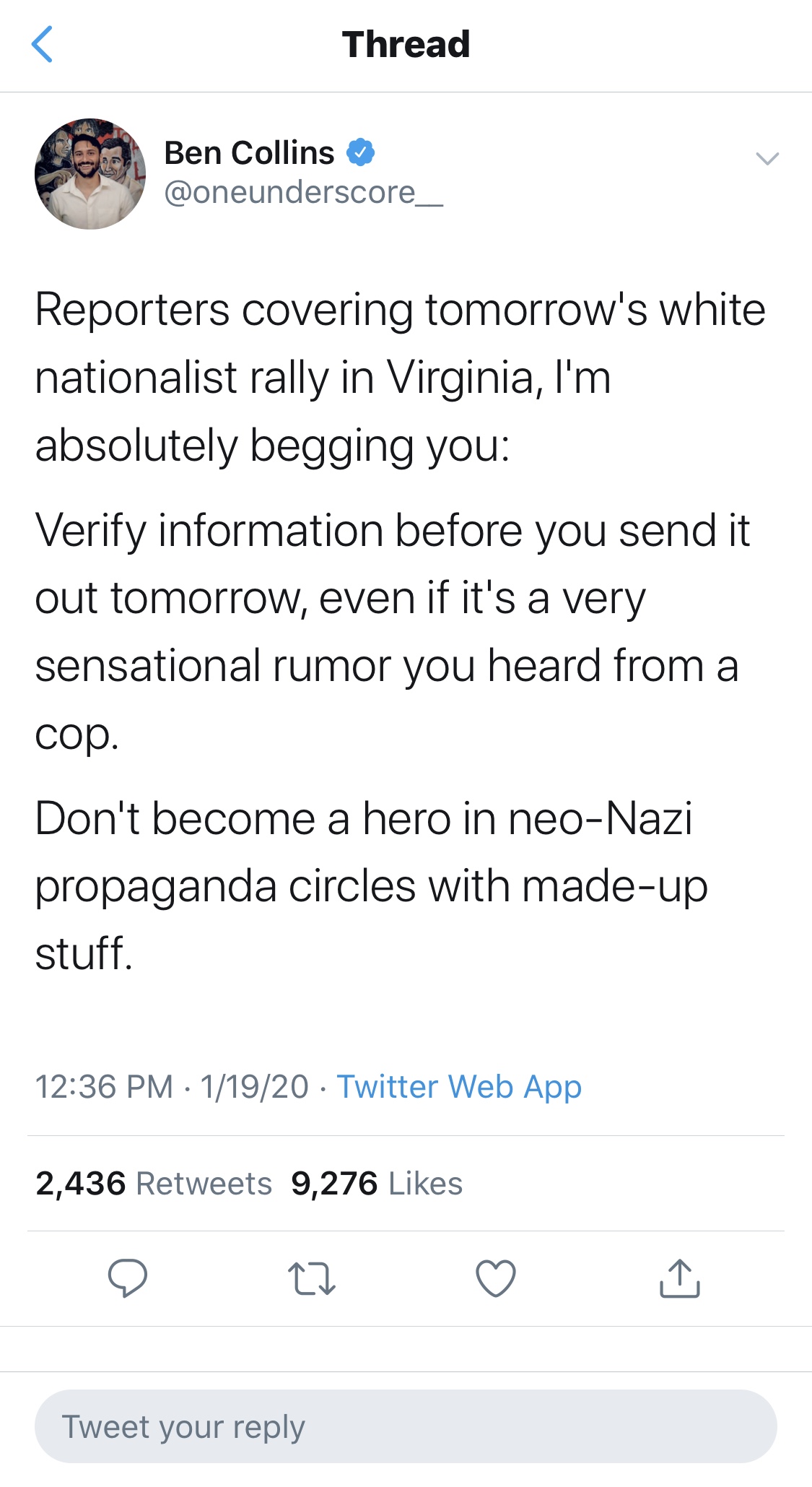 Monday’s rally in Richmond will likely see thousands head to the Virginia State Capitol to rally against gun control proposals. The proposals are supported by state Democrats and Democratic Gov. Ralph Northam declared a state of emergency ahead of the event. (RELATED: Antifa Group Plans To March Alongside Pro-Gun Protesters In Virginia)

The sweeping gun control proposals come after Democrats flipped both the state House and Senate in November. The Virginia State Senate has already approved three gun control bills, which could be approved by the House soon, the New York Times previously reported.

“Hi everybody! I’m deleting a tweet so I can be super clear about tomorrow’s rally in Virginia,” Collins tweeted after deleting his original tweet following backlash. “The Lobby Day protest is and has traditionally been a gun rights rally, but white nationalists, including militant group The Base, have been planning violent action at the event.”

Lobby Day is yearly event hosted by VCDL to advocate for gun rights. The event is always hosted on Martin Luther King Jr. Day and many head to Richmond to lobby lawmakers while they’re in session.

Gun groups have been meeting across the state for months leading up to Monday’s event.

Suspected neo-Nazis were arrested by the FBI ahead of the event. They were reportedly talking about Monday’s rally and had obtained weapons, the NYT reported. One of them was an illegal immigrant from Canada. Collins cited a total of seven arrests as a reason for originally calling it a “white supremacist rally.”