Delcy Rodriguez, vice president of the illegitimate government of Nicolás Maduro in Venezuela, has been banned from entering the Schengen area of the European Union since 2017, as a result of the sanctions against twenty senior Venezuelan officials.

However, in the early hours of Monday morning, Rodriguez landed in Madrid, at the Barajas airport, and received a visit from the transportation minister of the new socialist government in Spain, José Luis Ábalos. The scandal has leaked to the press. The Spanish newspaper Voz Populi had the exclusive. And since then, the government has already provided about a dozen versions of what happened.

First, they denied the meeting between Ábalos and Rodríguez happened at all. Next, they said the minister went to the airport for a personal visit with a friend. Then, they clarified that the friend was Felix Plasencia, Minister of Tourism for Maduro. Plasencia is not among the senior positions sanctioned by the European Union. After that, they said that Ábalos was forced to give a “forced greeting by circumstances” to Maduro’s vice president, because Plasencia — surprise! — was traveling on Rodriguez’s plane. Later, Ábalos said he went to the airport because he had been asked to do so by Interior Minister Fernando Grande Marlaska. 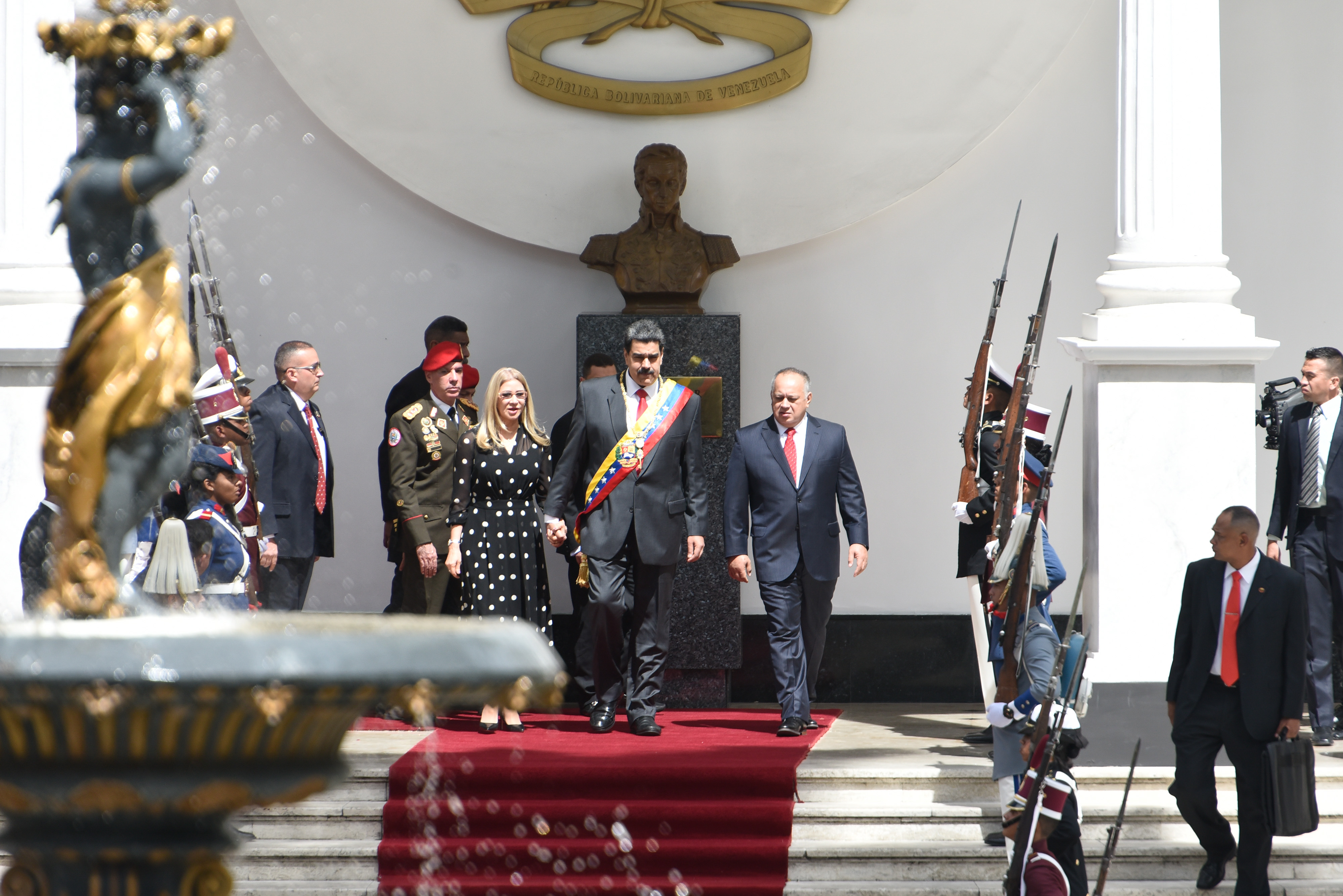 CARACAS, VENEZUELA – JANUARY 14: President of Venezuela Nicolas Maduro (C) arrives along with the First Lady Cilia Flores (L) to deliver his annual address to the nation at National Constituent Assembly on January 14, 2020 in Caracas, Venezuela.(Photo by Carolina Cabral/Getty Images)

Minister José Luis Ábalos, perhaps one of the most competent of the coalition government between the left and the hard-left, was in a pickle. The opposition demanded his resignation. That was when the President of the Government of Spain, Pedro Sánchez, intervened. He achieved what seemed impossible. He managed to further entangle what happened, congratulating Ábalos. According to the president, the minister had “managed to avoid a diplomatic crisis.” (RELATED: Trump Signs Executive Order Putting Embargo On Venezuela)

At this point, nobody knew what crisis the government was talking about, and thousands of questions remained unanswered. Everything smelled bad. Nor was it clear that Ábalos had not been the victim of a “friendly fire” incident from the government itself.

Meanwhile, on Saturday, thousands of people demonstrated on the street in Madrid with the president in charge, Juan Guaidó. President Sánchez refused to receive it. On television, a journalist asked the vice president of the Government of Spain, Pablo Iglesias of the hard-left Podemos party.

Officially, as far as the European Union is concerned, Guaidó is not the leader of the opposition, but the legitimate head of state in Venezuela. But Podemos, Pablo Iglesias’ party, is an ally of the Maduro regime. A

On Sunday, Ábalos went to television and offered an incredible succession of new versions in just a few minutes of the interview. In his explanation, he came to incorporate paranormal elements.

Venezuelan President Nicolas Maduro (C) arrives at the Congress with his wife Cilia Flores (L), the head of the Constituent Assemby, Delcy Rodriguez (R), and other authorities, to address the all-powerful pro-Maduro assembly which has been placed over the National Assembly and tasked with rewriting the constitution, in Caracas on August 10, 2017. Recent demonstrations in Venezuela have stemmed from anger over the installation of the all-powerful Constituent Assembly that many see as a power grab by the unpopular President Maduro. The dire economic situation also has stirred deep bitterness as people struggle with skyrocketing inflation and shortages of food and medicine. PHOTO: Getty Images/AFP/Ronaldo SCHEMIDT

“I have not had a meeting, but a greeting, in which I could remind him that he could not step on Spain,” he said.

He then said that the meeting was, “about 25 minutes,” which is longer than most greetings take. He also said Rodriguez “did not step on Spanish soil” but also that she made a stopover to get on another plane. Thus, if she did not touch the ground, this disturbing clarification suggests the possibility that Delcy Rodríguez is not subject to the laws of gravity.

The European Union sanctions compel the government to deport the vice president to the country of origin, that is, Venezuela, and prohibit her from passing through any airport.

If that wasn’t disturbing enough, two new new versions from Venezuela added a little more confusion. Venezuelan sources claimed that Spain knew Delcy Rodríguez was coming to Madrid and that she intended to stay in a luxurious hotel in La Castellana to hold business meetings with leaders in the oil sector. The Maduro regime seemed to be confident that, under the social-communist government, would be a place outside the law for Rodriguez.

“I have information from diplomatic sources that confirm that Spain knew in advance of the flight that landed at Barajas airport,” Venezuelan journalist Ibéyise Pacheco said. “Everything indicates that Delcy Rodríguez had initially arranged a meeting with Vice President Pablo Iglesias.” The final objective of the trip, according to this journalist, was to achieve a meeting with Pedro Sánchez. Many in Spain finds this hypothesis disturbingly plausible. (RELATED: Venezuelan Revolutionaries Are Asking For US Military Aid)

The U.S. State Department called the meeting, “disappointing,” which is a more elegant qualifier than the one used by the most Spaniards to describe their government’s actions.