When Tomeka Hart was interviewed during the jury selection process as part of the Roger Stone trial, the former Democratic congressional candidate said she was generally aware of developments in the Russia investigation, but that she didn’t “pay that close attention” to the probe.

She also insisted that Stone’s affiliation with President Donald Trump would “absolutely not” color her views of the longtime Trump confidante, according to a copy of a court transcript obtained by the Daily Caller News Foundation.

But Hart’s social media record, which emerged Wednesday after she came forward as the foreperson on Stone’s jury, paints a different picture.

Hart’s Twitter account shows that she tweeted frequently about developments in the special counsel’s investigation, typically stories that were negative for Trump. She was also intensely critical of Trump and his followers. (RELATED: Lead Juror In Roger Stone Case Ran For Congress As A Democrat In 2012)

In one Aug. 19, 2017 post, Hart referred to Trump as the “#KlanPresident,” an apparent reference to the Ku Klux Klan.

In another, Hart asserted that all Trump supporters are racist.

“Then stop being racists. Co-signing and defending a racist and his racist rhetoric makes you racist. Point blank,” she wrote on Aug. 2, 2019. 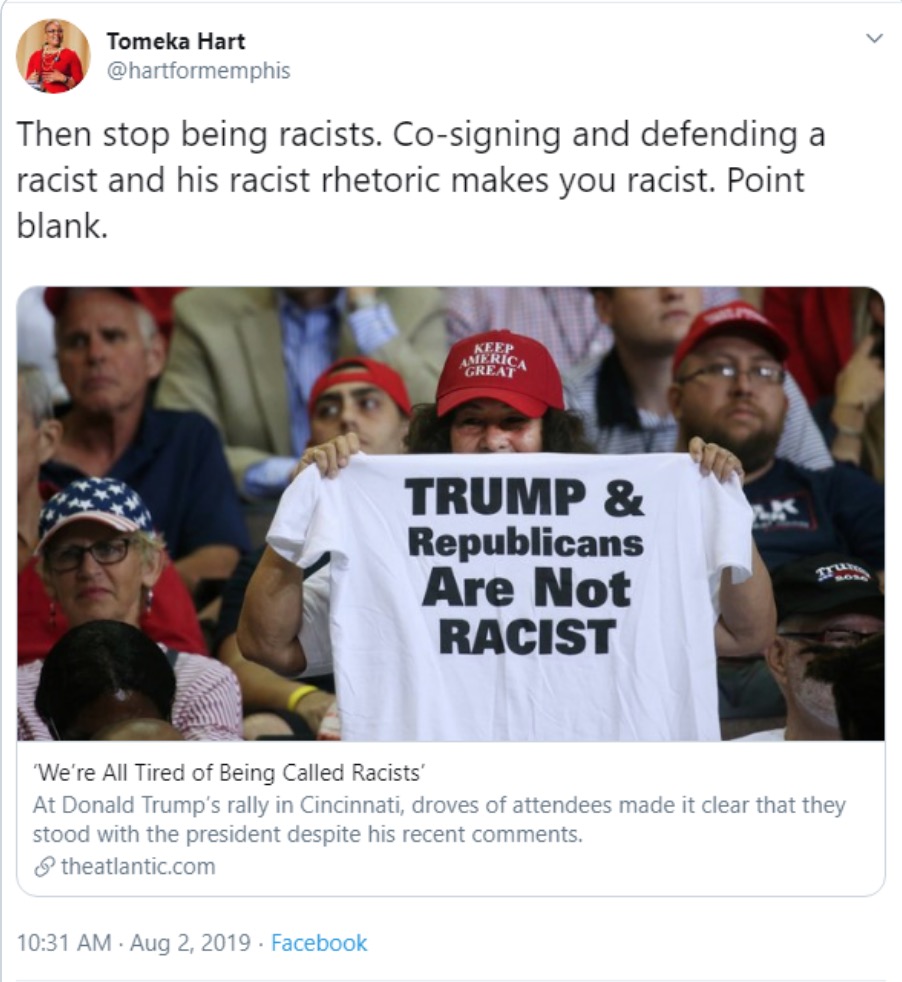 Months later, Hart would find herself leading a jury weighing a case against one Trump’s staunchest defenders: Stone. The GOP operative, who has known Trump for four decades, is widely credited with coaxing him to run for president.

Hart outed herself as the lead Stone juror in a Facebook post Wednesday expressing support for four prosecutors who withdrew from the case after the Justice Department revised a proposal that Stone serve up to nine years in prison. The new proposal still calls for “substantial” prison time for the 67-year-old Stone, but said that it should be “far less” than the 87-108 month recommendation.

The Hart-led jury, which deliberated for seven hours, convicted Stone on Nov. 15, 2019 on all seven counts he faced.

Hart was interviewed on Nov. 5, 2019 along with a group of other potential jurors. Hart is not identified by name in the transcript (she is referred to as Juror Number 1261), but the description matches her resume. Hart ran for Congress and also served as the foreperson on a grand jury in Tennessee for two years.

“And when we asked what you read or heard about the defendant, you do understand that he was involved in Mr. Trump’s campaign in some way?” Jackson asked.

“Is there anything about that that affects your ability to judge him fairly and impartially sitting here right now in this courtroom?” Jackson queried.

“What is it that you have read or heard about him?” asked Jackson.

“So nothing that I can recall specifically,” Hart replied. “I do watch sometimes paying attention but sometimes in the background CNN.”

“So I recall just hearing about him being part of the campaign and some belief or reporting around interaction with the Russian probe and interaction with him and people in the country, but I don’t have a whole lot of details. I don’t pay that close attention or watch C-SPAN,” she continued.

“Can you kind of wipe the slate clean and learn what you need to learn in this case from the evidence presented in the courtroom and no other source?” Jackson asked, to which Hart responded, “Yes.”

But Hart’s Twitter account suggests that she closely followed the Russia probe and other investigations involving Trump associates.

On Nov. 5, 2017 she tweeted a story about leaked documents purporting to show that Commerce Secretary Wilbur Ross had secret ties to associates of Russian President Vladimir Putin. On March 3, 2017, she circulated a New Yorker story entitled, “Trump, Putin and the New Cold War.” On March 24, 2019, Hart wrote that Republicans were “ignoring the numerous indictments, guilty pleas, and convictions of people in 45’s inner-circle” that stemmed from former special counsel Robert Mueller’s investigation.

Hart did not comment directly about Stone, whose case stemmed from Mueller’s investigation. But she did retweet a Jan. 30, 2019 post by CNN contributor Bakari Sellers that downplayed conservative criticism of the circumstances of Stone’s arrest.

Conservatives widely condemned the Jan. 25, 2019 FBI raid on Stone’s home in Florida. Sellers dismissed those complaints by listing black Americans who have been killed by police or died while in police custody.

It is unclear why Stone’s lawyers did not strike Hart from the jury pool given her political leanings.

The court transcript shows that Stone attorney Robert Buschel pressed Hart about whether she had any future political aspirations.

“I don’t know, not federal,” said Hart, who served on the Memphis, Tennessee, school board before running for Congress.

Judge Jackson interjected during the line of questioning to ask Hart whether Trump or Stone’s political affiliations would change how she weighed evidence at trial.

“Is there anything about his affiliation with the Trump campaign and the Republican party in general that gives you any reason to pause or hesitate or think that you couldn’t fairly evaluate the evidence against him?” Jackson asked.