A former Democratic congressional candidate whose social media accounts are replete with criticism of President Donald Trump came forward Wednesday as the foreperson on the jury that convicted longtime GOP operative Roger Stone at a trial in November 2019.

According to multiple news reports, Tomeka Hart revealed her role on the jury in a Facebook post supporting the four prosecutors who withdrew from the Stone case Tuesday in protest over a revision in a sentencing recommendation for the GOP operative.

“I have kept my silence for months. Initially, it was for my safety. Then, I decided to remain silent out of fear of politicizing the matter,” Hart wrote on Facebook, adding: “But I can’t keep quiet any longer.”

CNN first reported Hart’s post but did not note that she was a Democrat. Commercial Appeal, a news outlet affiliated with USA Today that spoke to Hart, reported details of her professional background. Those details match up with the same person who ran for Congress in 2012. A Politico reporter who covered Stone’s trial identified Hart as a former congressional candidate.

Hart, who did not respond to The Daily Caller News Foundation’s request for comment, lost to incumbent Democratic Rep. Steve Cohen in the 2012 primary.

Her Twitter feed shows dozens of references to Trump, many of them links to negative stories about the Republican. In a Twitter post on Aug. 19, 2017, Hart quoted a tweet referring to Trump as the “#KlanPresident,” in an apparent reference to the KKK. 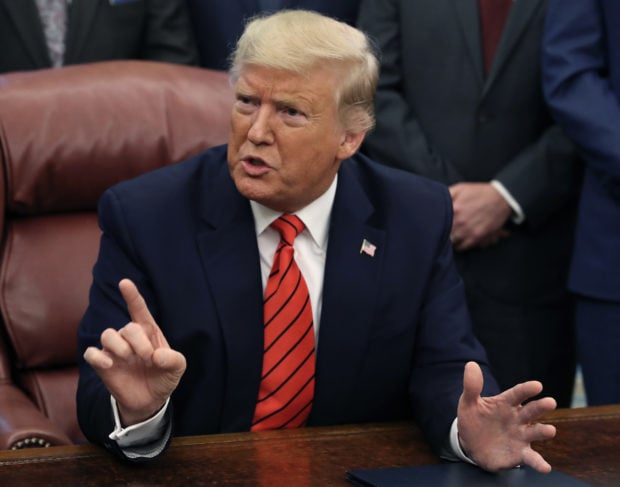 Donald Trump at the White House on February 11, 2020 in Washington, DC. (Photo by Mark Wilson/Getty Images)

She also retweeted a post from CNN analyst Bakari Sellers criticizing Stone defenders who were upset over the circumstances of his arrest on Jan. 25, 2019. More than a dozen FBI agents raided Stone’s home in South Florida. 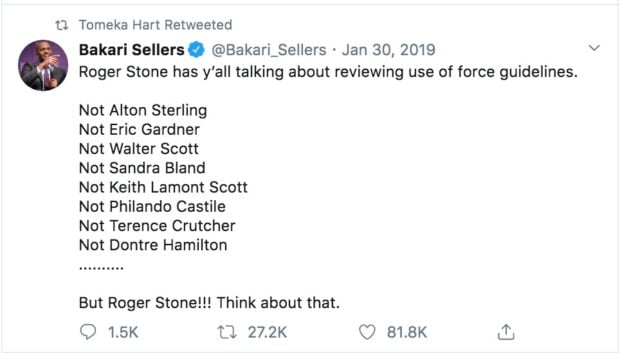 Stone, who was indicted Jan. 24, 2019, argued in the lead up to his trial that he would be unable to receive a fair trial in Washington, D.C., due to its left-leaning populace. He was convicted Nov. 15, 2019, on five counts of making false statements to Congress, one obstruction charge, and a witness tampering charge. (RELATED: Government Recommends Up To 9 Years In Prison For Roger Stone)

“I want to stand up for Aaron Zelinsky, Adam Jed, Michael Marando, and Jonathan Kravis — the prosecutors on the Roger Stone trial,” Hart wrote in her post, referring to the four prosecutors who resigned from the Stone case.

The government lawyers quit the Stone case after the Justice Department ordered a revision to the U.S. attorney’s office’s recommendation that Stone serve between 87 months and 108 months in prison on false statements and obstruction charges related to the House Intelligence Committee’s Russia investigation.

Trump weighed in Tuesday, and said the recommendation was “disgraceful” and a “miscarriage of justice.”

Soon after, a senior Justice Department official told reporters that leaders at the agency were “shocked” by the hefty prison recommendation.

Later on Tuesday, after the four prosecutors resigned, the U.S. attorney’s office recommended that Stone receive a prison sentence, but one “far less” than the 87-108 months that was initially proposed.

Prosecutors said in their revised filing that the initial recommendation was “excessive.”

“It pains me to see the DOJ now interfere with the hard work of the prosecutors,” Hart wrote on Facebook. “They acted with the utmost intelligence, integrity, and respect for our system of justice.”

She said the prosecutors did a “masterful job” presenting their case.

“As foreperson, I made sure we went through every element, of every charge, matching the evidence presented in the case that led us to return a conviction of guilty on all 7 counts,” she wrote.