Facebook temporarily marked a video about an abortion survivor as spam, an incident that came the same week an Instagram fact-checker temporarily rated a post about babies with Down Syndrome as “false.”

Life Training Institute’s pro-life speaker Seth Gruber told the Daily Caller News Foundation that he recorded an interview with abortion survivor Melissa Ohden in Washington, D.C., in January. He said he published and released the video Monday morning on audio podcast platforms and on YouTube before sharing the YouTube link to his personal Facebook account.

“Shortly after, I was flagged by Facebook on that post as having violated ‘community standards,’ which per the usual are never specified,” he told the DCNF.

Facebook told Gruber that his post “goes against our Community Standards on spam” and let him know that “no one else can see your post. We have these standards to help prevent people form misleading others. We may restrict your account if you violate our standards again.” 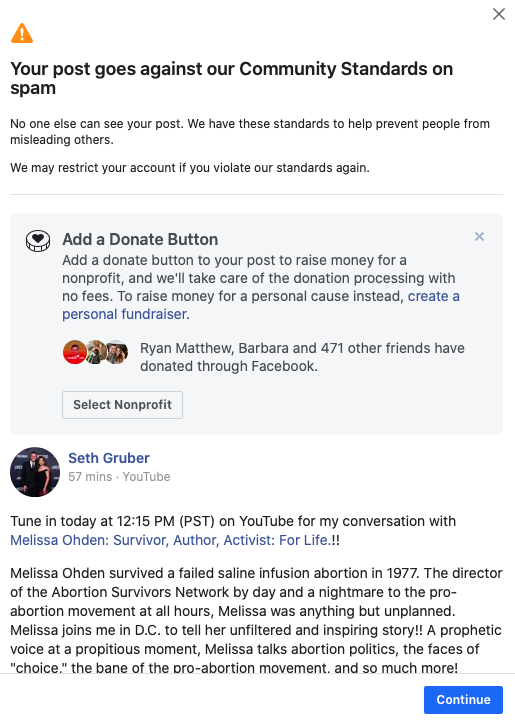 “The video was incorrectly removed by our automated spam systems but has now been restored,” a Facebook Company Spokeswoman told the DCNF.

Gruber said Facebook apologized to him for the mistake and that a Facebook spokesman assured him that “the removal of my post and its labeling as ‘spam’ was purely accidental, as part of an automated process.”

“It is strange however that the rest of my pro-life related content shared that same day was not flagged as ‘spam,'” he added. “While it would be easy to chop this up to pure ideological discrimination, I do want to recognize Facebook for reversing the ban and apologizing for the mistake.”

Gruber noted before Facebook reinstated his post that it is unusual that pro-abortion groups do not complain of social media censorship.

“While I would like to grant the benefit of the doubt to Facebook and chop this up to an automated software mistake, isn’t it interesting that we literally never hear stories of abortion-related content being removed from Planned Parenthood, NARAL, ACLU, etc.?” Gruber asked.

“The generic violation of ‘community standards to help prevent people from misleading others’ seems to never ‘accidentally’ happen to far-left pro-abortion groups.”

Gruber also said it is ironic that Facebook marked his interview with Ohden as spam, considering Ohden “discusses the frequent strategy of abortion ideologues to simply deny the reality of her birth, to claim that she has been lied to and there is no such thing as abortion-survivors.”

“It seems Facebook has proved that strategy true by simply clicking ‘delete’ on the story of an abortion-survivor,” he said.

The incident occurred only days after the Brazilian fact-checker Aos Fatos temporarily rated an Instagram post from the pro-life news source LifeNews.com as “False.” Aos Fatos refers to a fact check on disabled people’s right to death pensions.

Aos Fatos is part of the International Fact-Checking Network, a unit of the nonprofit journalism school and research organization, the Poynter Institute. Poynter did not yet respond to a request for comment from the DCNF.

The rating appeared to have been removed from the post Monday evening, LifeNews.com editor Steven Ertelt told the DCNF Monday.

A Facebook company spokesperson told the DCNF on Tuesday that “the label was applied mistakenly and has since been removed from the post.”

The post in question showed a picture of a baby with Down Syndrome with the caption, “Unborn babies with Down Syndrome are being discriminated against at an alarming rate. But pro-lifers are working to protect them and restore the rights of every baby in the womb.” 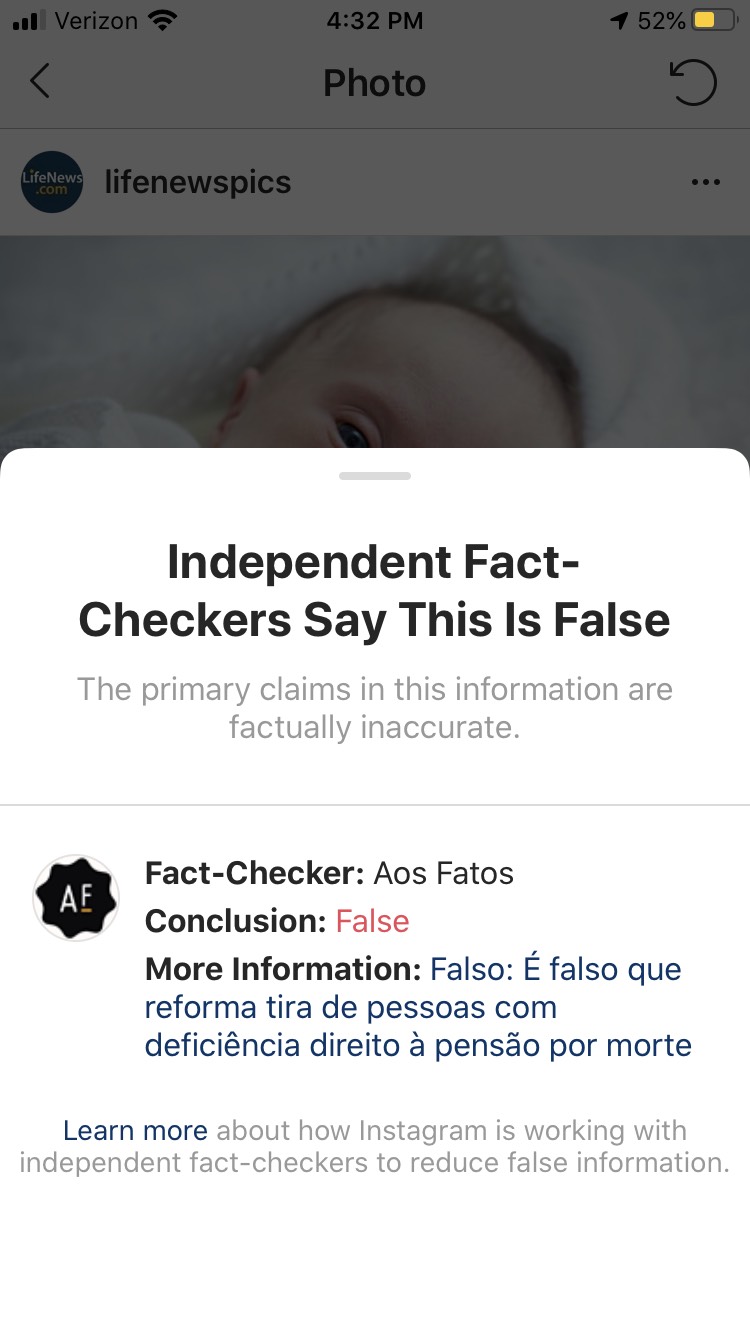 “We are very disappointed that Instagram censored our pro-life post and the image of a baby with Down syndrome,” Ertelt told the DCNF on Monday before the post was reinstated.

“Sadly, this is not surprising given the increasing levels of censorship pro-life advocates face on social media and the targeting of people with Down syndrome via abortion.”

Ertelt said Wednesday that LifeNews.com had not heard back from Instagram.