This is a speech that President Donald Trump could deliver some time later this year:

My fellow Americans, I speak to you now that the worst of the coronavirus is behind us. Now it’s time to think about next steps — about living up to the full potential of Making America Great Again. That is, we aim to make America as great, or even greater, than it was during and after World War II.

We have just been through the worst of what I call “World War Coronavirus.” And it truly was a world war — a war against disease. As we know, lives were lost, and we mourn each one of them. I said before the worst of the crisis — and during the crisis — and I’ll say it now: My opponents, in politics and in the media, sought to play up the suffering whenever they could, as a political hammer against me. They failed, of course, as they always do.

And yet to the innocents who lost their lives, and to their grieving survivors, you are in our prayers. We grieve with you. (RELATED: Coronavirus And Quarantines: How Wokeness Endangers Public Health)

Still, at the same time, we hereby highly resolve that these deaths shall not have been in vain. That is, honoring them, and honoring our own traditions, we are going to build a stronger, and, yes, greater America.

We are going to do what Franklin D. Roosevelt did during World War II. That is, even as he led the nation to defeat Hitler and tyranny around the world, he also mobilized the economy here at home. Americans built thousands of ships, tens of thousands of tanks, hundreds of thousands of airplanes, millions of uniforms, and billions of rounds of ammunition. 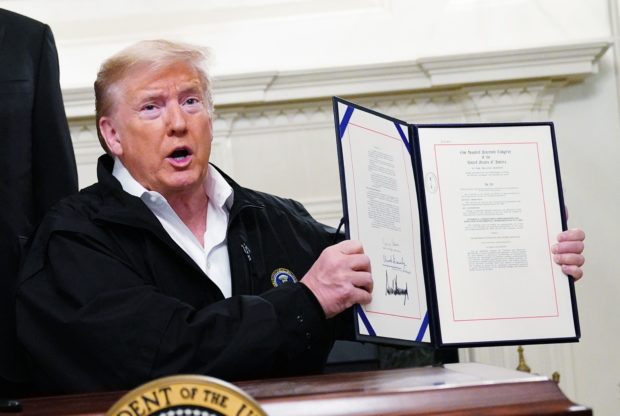 US President Donald Trump holds up an USD 8 billion emergency funding bill to combat COVID-19, coronavirus, after signing it in the Diplomatic Room of the White House in Washington, DC on March 6, 2020. (Photo by MANDEL NGAN/AFP via Getty Images)

And on top of that, Franklin Delano Roosevelt mobilized the genius of the American people, from the smartest scientists — working on everything from radar to penicillin — to the hardest-toiling workers who machined and forged all those products to perfection. Yes, the brain-work and the brawn-work that won the war — it was all done right here in the U.S.A. Made in U.S.A. I like the sound of that!

The result on the battle front was a typhoon of lead and steel that crushed our enemies. They were decisively defeated by our brave warriors even before we developed the atomic bomb — that astounding breakthrough, that proof that American science, and research and development, were the best.

And when World War II was over, our heroes, having avenged Pearl Harbor, having defeated Hitler and anti-Semitism, came home to a better and stronger — and more strategically self-sufficient — U.S. of A. We mourned our losses, and took good care of our veterans, and yet we all looked forward to a brighter future — because America had earned it.

That’s the world I was born into, the post-war era created by our long-standing industrial might and by the sacrifice and sweat of the Greatest Generation. I can tell you, those were good years. It was the “can do” spirit — big time.

Today, we face our own rendezvous with destiny.

Beginning five years ago, when I launched my campaign, I had the same vision, recapturing that “can do” spirit, which had been lost under my recent predecessors. I called it Making America Great Again. And we did, and we have done so, but there’s always more to do, because the American future is an endless frontier.

And yet at the same time, we’ve discovered vulnerabilities we need to fix. For instance, more than even I realized, we had let our supply chains come from China — Communist China. I don’t like communism, unlike one of my potential opponents this November. And I know that the vast majority of Americans agree with me.

In particular, we’ve let too much of our medical equipment and supplies come from China. Letting American companies outsource their supply chains to that country was a serious mistake, and it happened in the decades prior to my presidency. To the leaders of both parties who were complicit in letting it happen: Shame on them.

This outsourcing not only made us medically vulnerable, it also made us economically vulnerable. It was a foolish policy, and I’ve been working to reverse it. And of course, many have fought me — it’s time for that to stop.

Because today, in the wake of World War Coronavirus, the stakes are too high for business as usual.

So now, we are going to bring health care manufacturing, as well as all manufacturing, back from China. I’d like to commend Sens. Josh Hawley and Marco Rubio for their work in this direction, and now, under my leadership, we’re going to get the job done.

We are going to have a completely Made in U.S.A. health care system once again, so that workers in states such as Michigan, Pennsylvania and Wisconsin — and, of course, the other 47 states as well — can be a part of the health-economic boom.

I call it, Make America Healthier — and Greater.

Some will oppose my plan for ideological reasons, because they believe in some ivory tower theory about free trade and open borders. Well, we learned a lot about the folly of that theory during the supply-chain disaster, and now that the worst of it is over, we can’t forget what we’ve learned,

Others will oppose Make America Healthier because they are making money off of cheap labor, even slave labor, in China. And they don’t care about the danger the old system poses to America’s health and wealth. Well, I say to them that those days are over. You have to hire American, and make American.

Others will oppose this Make America Healthier plan because they are on the payroll of the Chinese. Maybe that’s legal, maybe that’s not. After we investigate, we’ll know more. And then we’ll adjust the laws if we need to, so that no American is taking dirty money from a foreign foe.

Still others might wonder if we can afford all this construction here in America. And I say, of course we can. What we can’t afford is ill health for our population!

During my presidency, the value of the stock market rose to an all-time high. That is, many trillions of dollars in new wealth were created by my policies. And yet then the market fell by trillions during the crisis. And so when the Make America Healthier plan kicks in, along with the normal rebounding of the wonderful economy I have created, we’ll have the money — trillions of dollars in investment capital.

Moreover, interest rates are at record lows. When interest rates are low, it’s stupid not to borrow and spend to build productive assets, and unlike some of my opponents, I’m not stupid. So I’ve directed Treasury Secretary Steve Mnuchin and Small Business Administrator Jovita Carranza to set up an emergency office to make loans to domestic healthcare manufacturers, big and small, so that they build plants and create jobs as well as, of course, produce life-saving medicines. There’s plenty of precedent for this: During World War Two, and then during the Cold War, presidents used the War Powers Act and the Defense Production Act to help spur what FDR called the “arsenal of democracy.” Well, today, I’m calling it the “arsenal of health.”

Yes, as interest rates continue to fall, we’ll scoop up the benefits for the American people. We’ll borrow cheap and build big, and the American people will win bigger, especially as we become the medical-export leader, instead of China.

Also, I’m establishing a Presidential X-Prize for vaccines and cures, not just for contagious viruses, but for other diseases as well. These Trump X-Prizes will motivate our best and brightest to strive, to seek, to discover and to cure.

Someday soon, we’ll have trillions of dollars’ worth of new medical labs and factories, all making medicines and medical equipment — including new and exciting cures and treatments from the X-Prize — right here in the U.S.A., providing good jobs at good wages.

And yes, of course, because I care about the health of each and every American, we’ll make sure that this medicine is available, at low cost, or even, as needed, it will be free. Because we want every American to be healthy enough to enjoy life, liberty and the pursuit of happiness.

Once again, we didn’t want this World War Coronavirus to happen. We all mourn the lives that were lost, and we regret the disruption, and we honor those first responders, nurses and doctors who fought on the front line in the war against the virus. Just tomorrow morning, in fact, I’m hosting another award ceremony for hero first responders and medical professionals here at the White House.

And it’s all part of my plan for, yes, Making America Great Again.

Thank you, and may Gold bless the United States of America.