Environmentalists are trying to block the cleanup of an abandoned Idaho mine that is leaking arsenic, antimony and other toxins into nearby rivers and streams.

Mining company Midas Gold is seeking federal approval to resume and expand mining in the Stibnite Mining District. The area, which rests along the East Fork of the South Fork of the Salmon River in central Idaho about 125 miles northeast of Boise, is currently an EPA brownfield site. Creeks and streams near the site contain high levels of arsenic from careless mining that occurred decades before current mining regulations, modern techniques, or even the Environmental Protection Agency existed.

As part of the mining plan, known as the Stibnite Gold Project, Midas Gold has pledged to restore the site by stopping erosion, cleaning up waste dumps and toxic pits, improving water quality, and reestablishing a salmon spawning stream that has been blocked by mining activity since the 1930s.

But the private conservation effort will never happen if the Idaho Conservation League, Idaho Rivers United and the Nez Perce Tribe have their way. All three groups claim they want the area to be restored, but not if it takes a new mining project to do it.

“Even with promises of restoration and reclamation, at the end of the day, Midas Gold is still a mining company, and their main interest in Stibnite is not to restore the site, but to mine it for gold,” the Idaho Rivers United declared in a recent press release. (RELATED: Mining Company Withdraws From $20B Oil Sands Project — Citing Trudeau’s Environmental Policies) 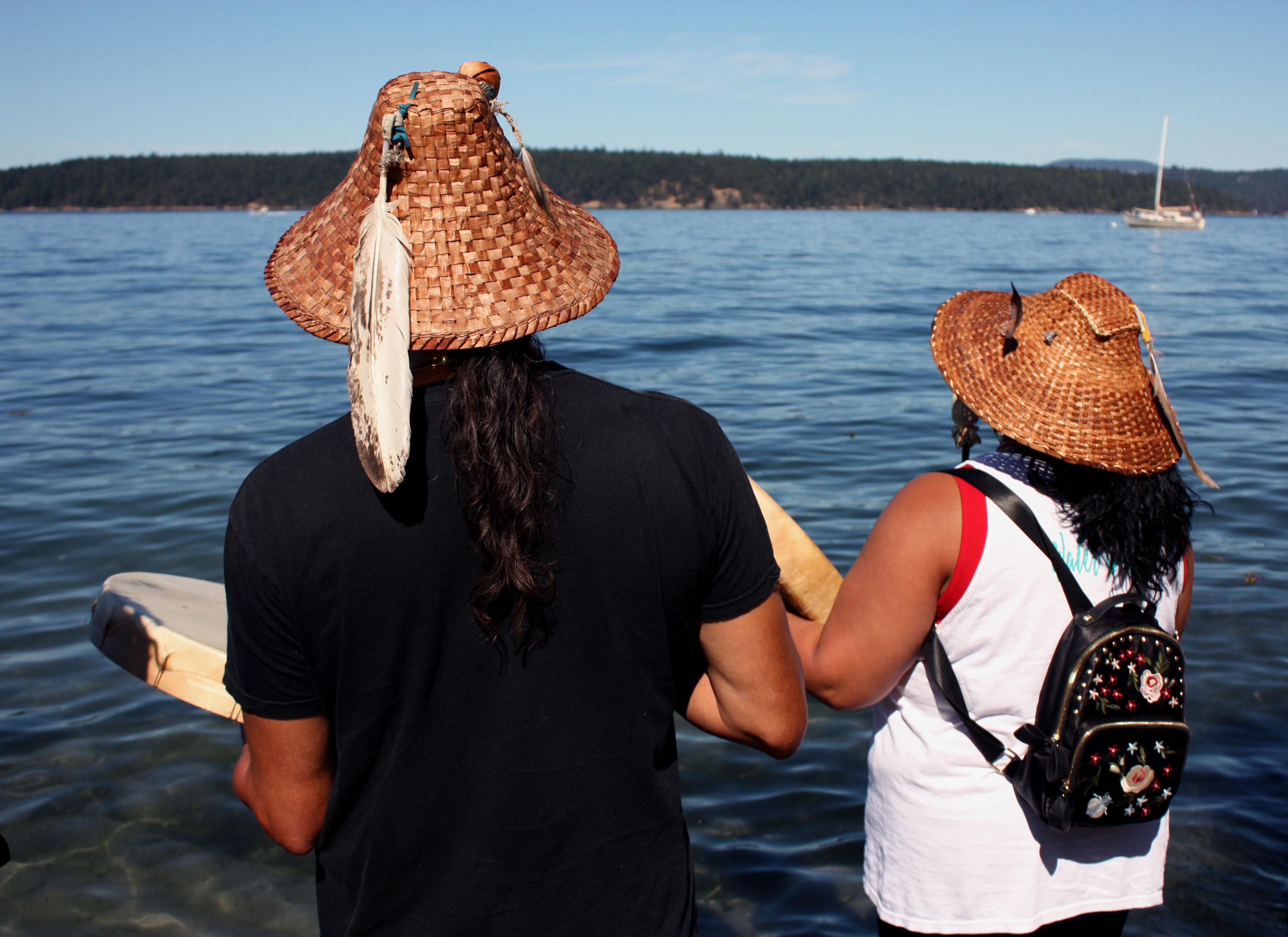 Stanch tribal member Paul Cheoketen Wagner and Yaskam/Nez Perce tribal member Roxanne White take part in ceremony at edge of Salish Sea, on the same day they participated in a water-based “pipeline resistance training camp”, held by Greenpeace and the Mosquito Fleet (a Pacific Northwest ‘kayaktivist’ group) in the San Juan Islands, in the waters just off the US-Canada border on August 26, 2017. (TIM EXTON/AFP via Getty Images)

“It seems that ‘environmental’ groups are more concerned with being anti-development than they are with actually achieving success in cleaning up the current ecosystem problems,” said Willie Sullivan who co-chairs Support Stibnite, a group of local residents and businesses supportive of the Stibnite Gold Project and the restoration planned as a result of the mining activities.

Sullivan lives in Yellow Pine, the closest town to the site. Yellow Pine is home to three restaurants, no gas stations, and, at last count, 32 year-round residents. The town, and the surrounding area, will see an influx of new jobs if mining resumes.

The Stibnite Mining District is estimated to contain as much as 4.5 million ounces of gold and 50,000 tons of antimony, an element used in batteries, flame retardants and microelectronics. Antimony is found in the mineral stibnite, which gives the mine its name.

Midas Gold estimates the mine will directly create 500 jobs for up to 15 years in an area with an unemployment rate more than 40 percent higher than the state average.

According to Idaho resident Todd Hoffman, the jobs are desperately needed. “People in rural Idaho struggle to get by on minimum wage, seasonal jobs in the tourism sector.”

“The jobs are secondary to me, as I have been on the environmental side of things since the 1960’s,” said Sullivan. “But good paying jobs are certainly a plus.”

Mining is nothing new in the area, and the land has the scars to show for it.

The first mine in the Stibnite Mining District opened in 1899. During World War II, the mines became vital to the Allied war effort. (RELATED: GOP Lawmakers Target ‘Tool Of Tyranny’ EPA Used To Kill Mining)

After Germans began using tungsten to create armor-piercing shells, the United States was desperate to find its own source of tungsten so its guns could also penetrate tanks and armored vehicles. A significant tungsten deposit was found in the Stibnite Mining District and, soon, men could fulfill their draft service by extracting tungsten from the stibnite mines. 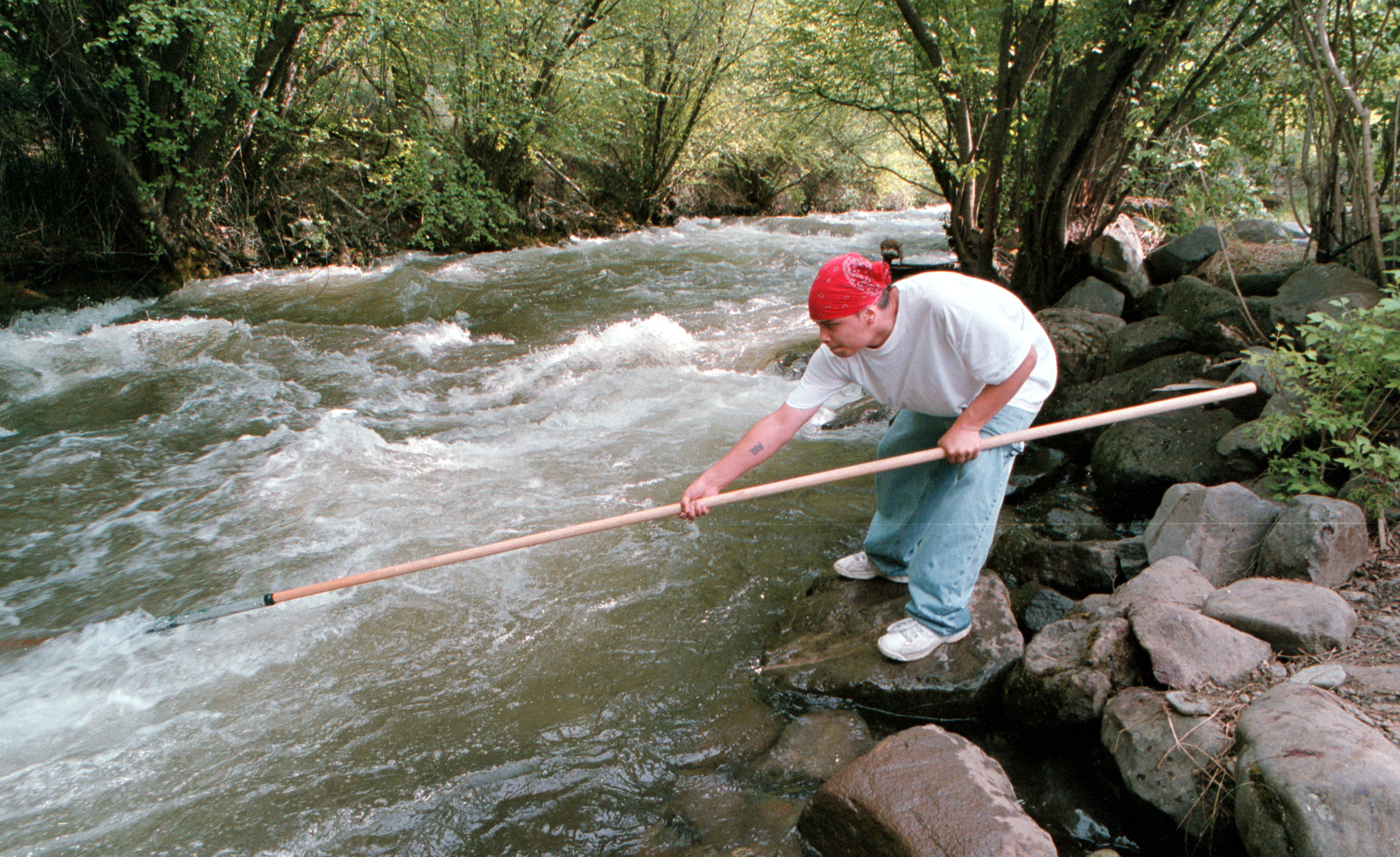 The Combined Munitions Assignments Board, a government agency in charge of supplies during WWII, claimed that the tungsten mined in the Stibnite Mining District shortened the war by at least a year and saved a million lives.

Environmental concerns fell by the wayside as the government pushed for raw materials to be made available as quickly as possible for the war effort. Mining waste was pushed into valley floors and left to drain into surrounding streams. The East Fork of the South Fork of the Salmon River was redirected through a deserted toxic mining pit, cutting off salmon migration.

When mining halted in the late 1990s, two open pits gouged the earth, the area was stripped bare of topsoil, millions of tons of waste rock and tailings covered the site, and arsenic contaminated the surrounding rivers, creeks and ponds.

Midas Gold will be required to set aside tens of millions of dollars to erase much of the damage of the past and fully restore the water quality, landscape, fisheries, and natural habitat of the area. Restoration will occur side by side with operations.

Even the Idaho Conservation League, one of the groups most critical of mining in the area, is impressed with the efforts Midas Gold has made to be sensitive to environmental concerns.

“To give credit where credit is due, Midas Gold has legitimately raised the bar to date by reducing impacts of their exploration efforts and worked collaboratively on mitigation measures for these impacts,” John Robison, the Public Lands Director of the Idaho Conservation League, wrote on the organization’s website.

“Midas Gold has also invested in pioneering studies of how mining operations can minimize light pollution. Their staff has been actively engaged in any number of community-related programs and have participated in good faith in efforts that [the Idaho Conservation League] has also been involved in.”

Still, some activists refuse to allow the Stibnite Gold Project to move forward without a fight.

The Nez Perce Tribe has sued Midas Gold claiming the company has violated the federal Clean Water Act. In the lawsuit, the Tribe claims Midas Gold is guilty of “unlawful discharge of pollutants into waters within and below their proposed Stibnite Gold Mine.”

A 2012 report by the U.S. Geological Survey found that water pollution related to the Stibnite Mining District goes back to at least 1919, and was exacerbated when a dam “failed in 1965, which resulted in … debris deposits downstream.”

Additional “large increases in … concentrations of arsenic, antimony, and iron [were discovered] after a renewed period of mining activity in 1982.”

Midas Gold has yet to receive the regulatory approval to work on the property or begin pollution reduction efforts, according to Mckinsey Lyon, the vice-president of external affairs for the company.

“A lawsuit by the Nez Perce Tribe will not clean up the Stibnite Mining District,” said Lyon. “It will only slow down our ongoing efforts to get on this site and help this area.”

“In the Stibnite area, the current status is that toxic minerals and metals are leaching into the streams and rivers because nothing has been done to address the problems created by previous mines,” Sullivan said. “The Tribe’s lawsuit seems counterproductive to me in they are suing Midas over the very results that both parties hope to achieve.”

Still, Emmit Taylor, a member of the Nez Perce Tribe who serves as director of the Tribe’s Watershed Division told Boise State Public Radio the Nez Perce refuses to support any environmental restoration tied to new mining activity in the Stibnite Mining District.

“What we do support is restoration of the site as it is right now,” said Taylor,

But there seems no one willing to pay for the restoration of Stibnite other than Midas Gold. After previous mining operations ceased in 1997, the federal government engaged in a limited cleanup of the site. By 2012, the federal government stepped away from the Stibnite Mining District and stopped putting resources towards reducing the environmental damage caused by the shuttered mines.

For now, the site is in limbo and many believe it will never be cleaned up unless new mining occurs.

“If nothing is done, the pit just sits there in perpetuity. I feel like the only way this toxic mess is going to be cleaned up is to let someone in to mine it,” he believes. “If Midas is allowed to get this project up and running the site will ultimately be better off.”