The Justice Department is probing a series of stock trades that Senate Intelligence Committee Chairman Richard Burr made in the weeks after receiving briefings about the coronavirus pandemic, CNN reported.

The Justice Department is coordinating with the Securities and Exchange Commission on the matter, and the FBI has contacted Barr, a North Carolina Republican, according to CNN, which cited two people familiar with the matter.

On March 19, ProPublica reported that Burr sold between $628,000 and $1.72 million worth of shares in various companies on Feb. 13. The stock market was near its all-time high when Burr made the trades. The Dow Jones Industrial Average has fallen more than 35% since then as the pandemic spreads across the globe.

As chairman of the Senate Intelligence panel, Burr had received briefings about the threat posed by coronavirus. During a speech before a private group on Feb. 27, Burr said that the coronavirus strain was “much more aggressive in its transmission than anything that we have seen in recent history.” 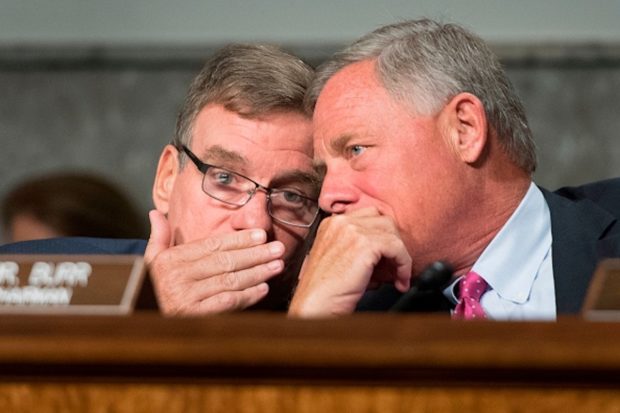 It is illegal under the STOCK Act, passed in 2012, for lawmakers to profit from information they’ve obtained through the course of their official duties. There is no indication so far that Burr made the stock trades based off of information he received as a senator.

He has volunteered to turn over information to the Senate Ethics Committee.

Burr’s lawyer, Alice Fisher, told CNN that he “welcomes a thorough review of the facts in this matter, which will establish that his actions were appropriate.” (RELATED: GOP Rep. Matt Gaetz: Richard Burr Should Be Removed From The Senate)

“The law is clear that any American — including a Senator — may participate in the stock market based on public information, as Senator Burr did. When this issue arose, Senator Burr immediately asked the Senate Ethics Committee to conduct a complete review, and he will cooperate with that review as well as any other appropriate inquiry,” she said.