The eight elite private colleges of the Ivy League are slated to receive millions in taxpayer-funded coronavirus stimulus money despite controlling endowments with a combined value in 2019 of over $140 billion.

Five Ivy League schools posted operational surpluses of over $200 million in 2019, according to their financial statements from that year. Secretary of Education Betsy DeVos said that schools with significant endowments should determine whether they really need federal assistance and to send any unneeded stimulus funding to schools that are actually in need.

The eight Ivy League schools are set to receive a combined $61.7 million in federal funding through the Coronavirus Aid, Relief and Economic Security (CARES) Act.

Harvard University spokesman Jason Newton said Monday that the school will be giving 100% of its $8.6 million federal funding package to its students with urgent financial needs amid the pandemic.

And a Brown University spokeswoman said its $4.8 million CARES Act package would be used to help sustain its commitment to offer “generous financial aid” to its students in financial need.

None of the other six Ivy League schools responded to multiple inquiries from the Daily Caller News Foundation asking if they would relinquish any of their federal coronavirus funding.

Total compensation packages — salary and benefits — for the chief executives at the eight Ivy League schools ranged from $971,000 to $2.9 million in 2017, the latest year that data is available, according to The Chronicle of Higher Education.

The CARES Act, which was signed into law by President Donald Trump in March, will provide nearly $14 billion in relief funding to more than 5,000 universities across the United States, according to the Education Department. The funds are set to be distributed to schools formulaically based on the number of Pell Grant recipients at each institution and their total student enrollment. The formula, which Congress set, does not take into account a school’s financial health.

Schools must agree to divert 50% of its stimulus funding directly to students who have been disrupted by the coronavirus crisis, while the remaining funds can be used for institutional use.

But DeVos said it’s a “poor use of taxpayer money” to send millions to schools with significant endowments and has asked those universities to send any unneeded federal funds to schools in need, according to DeVos spokeswoman Angela Morabito.

“We hope that the presidents of these schools will take the Secretary’s advice and direct CARES Act funds to students in need, no matter where those students are enrolled,” Morabito told the DCNF.

The University of Pennsylvania, which controls an endowment valued at $14.7 billion in 2019, did not answer the DCNF when asked if it would relinquish its $9.9 million coronavirus stimulus, nor if it would use the $519 million operating surplus it reported in its 2019 financial statements to help its students.

Columbia, Princeton and Yale Universities, which reported in their 2019 financial statements operational surpluses of $222.9 million, $405.5 million and 270.4 million, respectively, also did not respond when asked if they would relinquish their coronavirus funding.

Dartmouth College, which reported a more modest $32.6 million operational surplus in its 2019 financial statement, also did not respond to the DCNF.

Cornell and Brown Universities reported in their 2019 financial statements operational losses of $104.2 million and $25.4 million, respectively, but the schools also control endowments that in 2019 were valued at $7.3 billion and $4.2 billion, respectively. Cornell did not respond to DCNF when asked if it would relinquish its federal coronavirus funding.

Brown University vice president for Communications Cass Cliatt told the DCNF: “For years, Brown had been committed to offering generous financial aid so that the students we admit can attend college regardless of their family’s income. These funds will help sustain that commitment during a time of great economic stress for students and their families. The funds have not yet been received.”

Harvard University, which posted an operational surplus of $228 million in its 2019 financial statement and also has the nation’s largest college endowment valued at $40.9 billion as of 2019, said Monday it would allocate 100% of its $8.7 million CARES funding package to its students facing urgent financial needs amid the coronavirus pandemic.

“Harvard will allocate the funds based on student financial need,” Newton, the spokesman from Harvard, said in a statement Monday. “This financial assistance will be on top of the significant support the University has already provided to students — including assistance with travel, providing direct aid for living expenses to those with need, and supporting students’ transition to online education.” 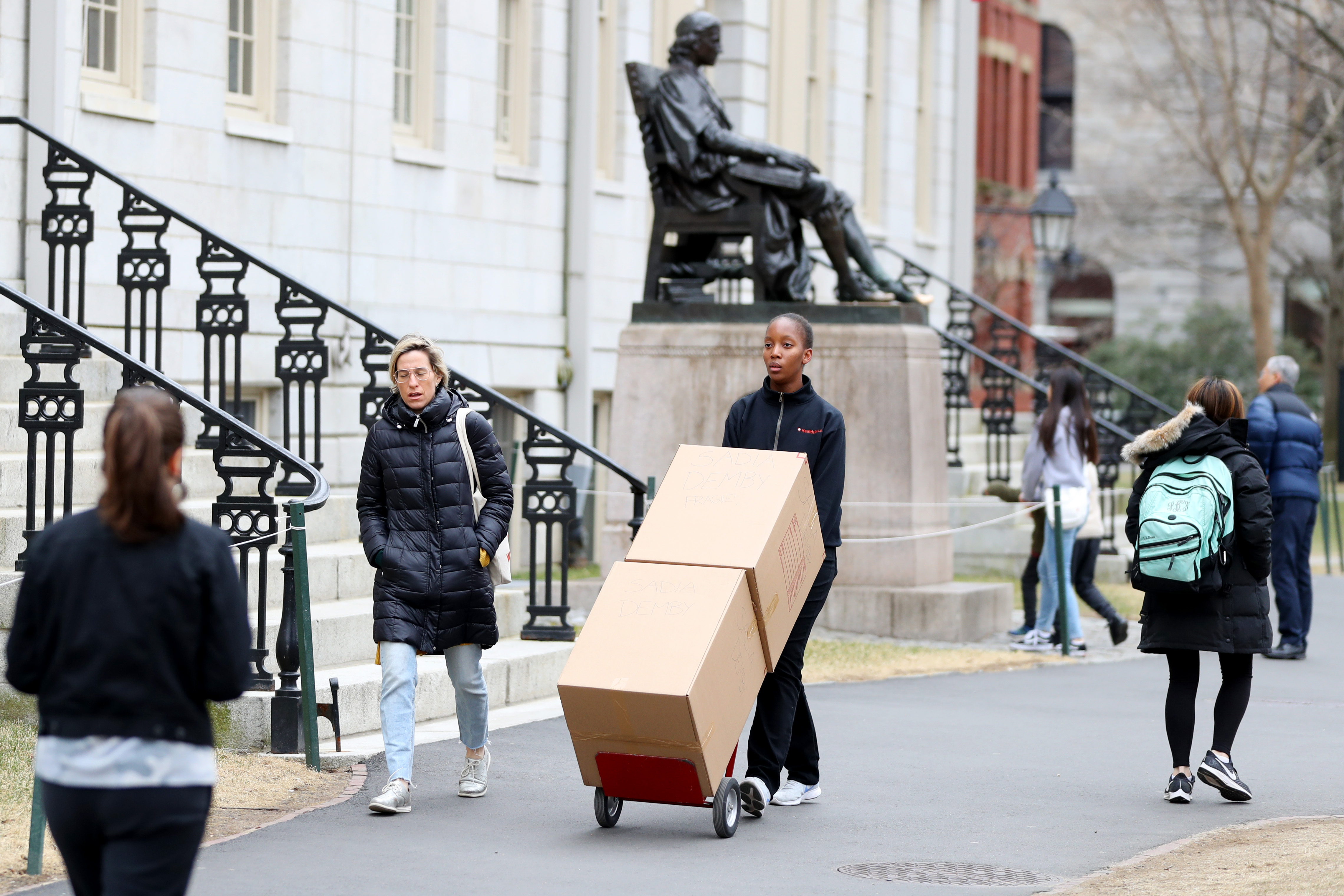 Sophomore Sadia Demby moves her belongings through Harvard Yard on the campus of Harvard University on March 12, 2020, in Cambridge, Massachusetts. Students have been asked to move out of their dorms by March 15 due to the Coronavirus (COVID-19) risk. (Maddie Meyer/Getty Images)

Harvard vice president for Finance and CFO Thomas J. Hollister addressed the school’s massive endowment in a statement to The Harvard Crimson on Thursday, saying that the private school would “distribute as much from the endowment as we responsibly can.”

Hollister said the value of the endowment has declined “substantially” from its $40.9 billion valuation in 2019 due to the coronavirus stock market crash. He told The Crimson it was now valued in the “mid-30 billion range.”

Hollister also said Harvard will need to balance its long-term financial welfare with the need to deliver financial support to the school in the short term, adding that “there’s a lot less flexibility in the use” of the endowment than people imagine.

In reporting its $298 million operating surplus and a total increase in net assets of $2.3 billion in 2019, Harvard said that 70% of its endowment is restricted to specific programs, while the remaining funds are “more flexible in nature.”