Firemen went about their work as their silhouettes made them look like demons against the flames that reached for the skies in San Francisco Marina District. Dropping off the local news anchor and his cameraman, I headed back to NBC’s KRON-TV affiliate offices on Van Ness Ave for another assignment from the producer who had flown out from New York for the news of the day: Loma Prieta had hammered the Bay Area and turned everyone’s laconic dream into a nightmare of death and destruction. 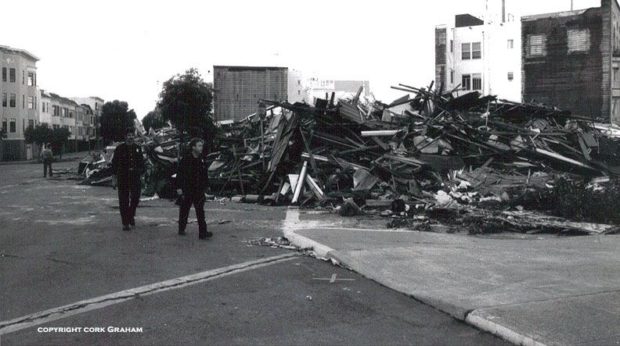 Black and white photos of residents controlled by SFPD as they went back to their Marina District homes to get their belongings from the shambles, the day after the night of burning.

As the night wore on, looting broke out in the Tenderloin and then the shooting started. Some of it was reported the public, much more was held back as there’s nothing worse for tourism in a city that thrives on tourism than a high body count.

Here we are now in the US, dealing with the Wuhan Virus. How many have died as the result of pandemic, and how many more will die as the result of the economic and societal repercussions of the virus in the future? Now take that up to the next level with a local cataclysmic event, such as an earthquake. How prepared is your city, and more importantly how prepared are you?

Many are amazed that earthquakes effect more than just Pacific States and Alaska, but that earthquakes hit other areas of the US, even the U.S. Capitol. As San Francisco reminded us with how public and emergency services went down for days, even weeks, imagine in an earthquake when the population is dealing with a highly contagious disease!

Everyone who lives in an area prone to earthquakes is wise to not have to wait for the cavalry to come save the day. Like the armed citizen who carries every day for the horrible moment that hopefully will never come, the prepared individual has a certain number of supplies in the home and vehicle and comes from a mindset that is in the present thinking of the days and weeks ahead of a potential emergency. 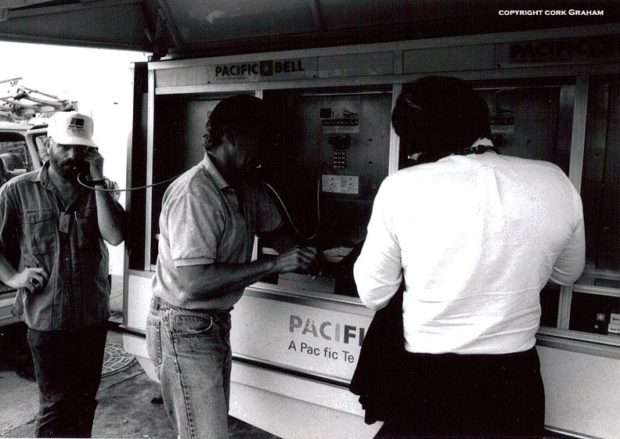 Residents calling their loved ones from the emergency telephone station provided.

Food, water, shelter and protection are the needs of every mammal. Having a thirty-day supply of food is a first step in getting ready for any catastrophe. These are canned and dried goods. Make sure that you also take care of you emotional state by including not just foods that keep the physical motor going, but also comfort foods that help keep your morale up.

One of the first things to go in my neighborhood back 1989, next to electricity, was water. Pipes burst. Water was turned off. It was a hours and days for many to get their water back. We didn’t have bottled water options in the way you do these days. Instead of just having a bunch of water bottles stacked up in your garage, have a couple filled cooler bottles on hand, but more importantly have at least two different types of electricity -independent water filters in your home: one of the pump type, such as a Katadyn or Pur, and a Lifestraw.

Preppers often stack their homes with MREs and other types of dried food goods. These are fine, but many don’t realize that those types of foods are not meant to be consumed for weeks on end. If you do, it’s one of the best ways to destroy the good probiotics in your digestive system. This is why anyone who has been in combat will remember returning from three-day-plus operations to the chow or mess hall where warm, meals were prepared by cooks, and MREs and before that C-rations were carried onto operations and missions. That return to base was a much needed recovery and clearing of the digestive system.

If services don’t return, and worse the freezer stops working, the best option is to always have a vegetable and fruit garden running as permitted by the season, or whatever improvements, such as a greenhouse, offer. Not having a “victory garden,” and instead watering a lawn, is a post-WWII luxury. Greens will keep you healthy. 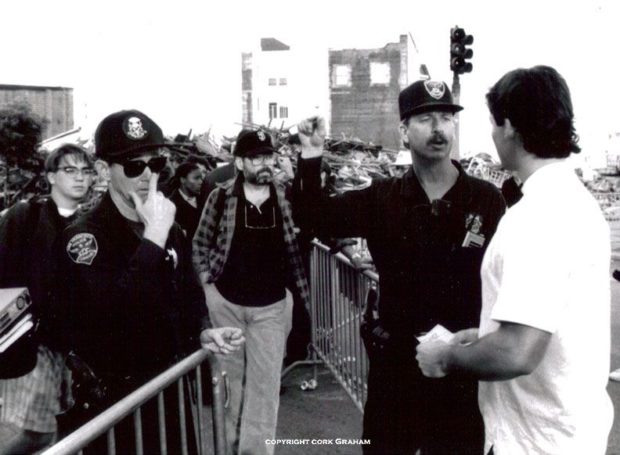 Black and white photos of residents controlled by SFPD as they went back to their Marina District homes to get their belongings from the shambles, the day after the night of burning.

Chickens are often frowned upon in metropolitan areas, but rabbits are a way to have meat on the table when crazy actions are taken by the major food corporations, like killing off chickens and pigs, instead of selling or donating them locally. During the Great Depression, my father helped keep his family fed, with income as a young boy, by raising rabbits for their meat and fur.

Having a full-size family tent is another wise purchase. You might have to set up tent stakes after digging yourself out of your home. Best to get two if you can. One can be dedicated to sleeping. The other will be used for cooking and dining, and working on things outside of the sun and rain.

Annie get your gun now. What was learned by this recent lockdown in California, was how ill-prepared citizens were for the likelihood of chaos and looting. When the lights go out, the criminally inclined are quick to take opportunity. Rushing to the gun store to be a gun after the emergency has begun is more than late: especially if you live in a state with a many day waiting period, like California.

As a side note, during the present CCP Virus pandemic, there were never before seen single day sales of firearms for the nation. Basically, people realized they were going to be on their own when it came to defending against theft and murder. Frankly, this is more than a bit late, more so if you’ve never even picked up a gun, or received proper training in their use.

The first night after Loma Prieta hit, every vendetta and every chance to break into apartments, stores and restaurants in downtown San Francisco was grabbed. Law enforcement had their hands full patrolling in their cars while shootouts broke out in the Tenderloin and other areas of the city, many not reported by the media, much for the same reasons hundreds of filled body bags were never reported during Katrina in New Orleans.

You can’t go wrong with a pump 12 gauge shotgun and a high-capacity 9mm semi-automatic handgun, like a Glock 17. If you think you have to camp out on the roof of your business, like those in LA’s Koreatown during the Rodney King riots, repelling looters, then an AK47 or AR15 would be better.

Of course, the CCP virus brings a whole new flavor of response to such a cataclysm, much in the same way that AIDS/HIV did during the hysteria and fear that took the 1980s. EMTs will be travelling around in their PPEs, either on, or ready to slip into when they get to the emergency. Many will make decisions on whether to respond based on how much of a risk it might be to them personally. Looking at the apocalyptic videos released from Guayaquil, Ecuador was a stark reminder.

One of the most poignant was by a resident of the city who had just pulled his brother’s corpse out onto to the street and videoed the police a block down the street, who had refused to respond. They told him to call EMS, but that would take two days due to all the other cases and corpses—frustration led to corpses doused with Diesel and immolated in the streets of the Miami Beach of Ecuador.

Pulse oximeter might be something nobody would have suggested before the CCP Virus, but if you remember watching videos leaked out of Wuhan of residents falling over dead, long before the mass media started reporting the story, knowing why they keeled over will explain. One of the reasons the CCP virus is so fear-inducing is that it creeps up on you like a python, not knowing you’ve been suffering from the lack of oxygen until it’s too late. Taking a reading twice a day is good practice normally, so that you can get yourself to the hospital immediately if you go below 70-percent on your blood oxygen levels.

Get your gear, become proficient in their use, and most importantly have a coordinated plan, so you and your loved one aren’t left like the masses, deer in the headlights.