The move came as part of Attorney General William Barr’s efforts to ensure that civil liberties are protected during the coronavirus pandemic, the Department of Justice (DOJ) stated in a press release. The statement of interest supports a lawsuit filed by seven Michigan businesses challenging Whitmer’s restrictions.

“The facts alleged suggest that Michigan has imposed arbitrary and irrational limits on Plaintiffs that, if established, could violate the Equal Protection Clause of the Fourteenth Amendment,” according to the DOJ statement of interest. (RELATED: Here’s How The DOJ Has Fought Against Orders Limiting Religious Services During The Pandemic)

“Our Constitution is enduring, and it is critically important that government comply fully with the Constitution in times of crisis,” said Assistant Attorney General Eric Dreiband of the Civil Rights Division in a statement.

He continued: “The Constitution permits appropriate state and local government restrictions to protect the health and safety of Americans, but it does not permit arbitrary limits that limit the right of all people in our country to be treated equally and fairly by the government.”

The state has “followed the science and listened to medical experts” and that “the worst thing we can do is open up in a way that causes a second wave of infections and death, puts health care workers at risk, and wipes out all the progress we’ve made,” Whitmer said in a statement Saturday.

“We have absolute confidence in the legal authority I have exercised to protect the people of Michigan,” Whitmer continued. “It is crystal clear that this challenge is coming directly from the White House, which is ignoring the risk of a second wave of the virus and pushing too quickly to roll back public health guidelines.”

The Michigan governor has sparked protests in her state over strict stay-at-home orders prohibiting Michigan residents from visiting their family and friends, holding public and private gatherings, and restricting which businesses may operate.

She has also blamed politics for the pushback and protests against her orders.

“There is a lot of politics at play here, unfortunately,” Whitmer told Fox News. “The protests are very political in nature instead of being focused on the stay-at-home order.”

She continued: “But I’ve been focused on doing my job, and I’m going to keep doing that and I’m not going to apologize about that. I’m not changing the way I run this state because of some protests.” 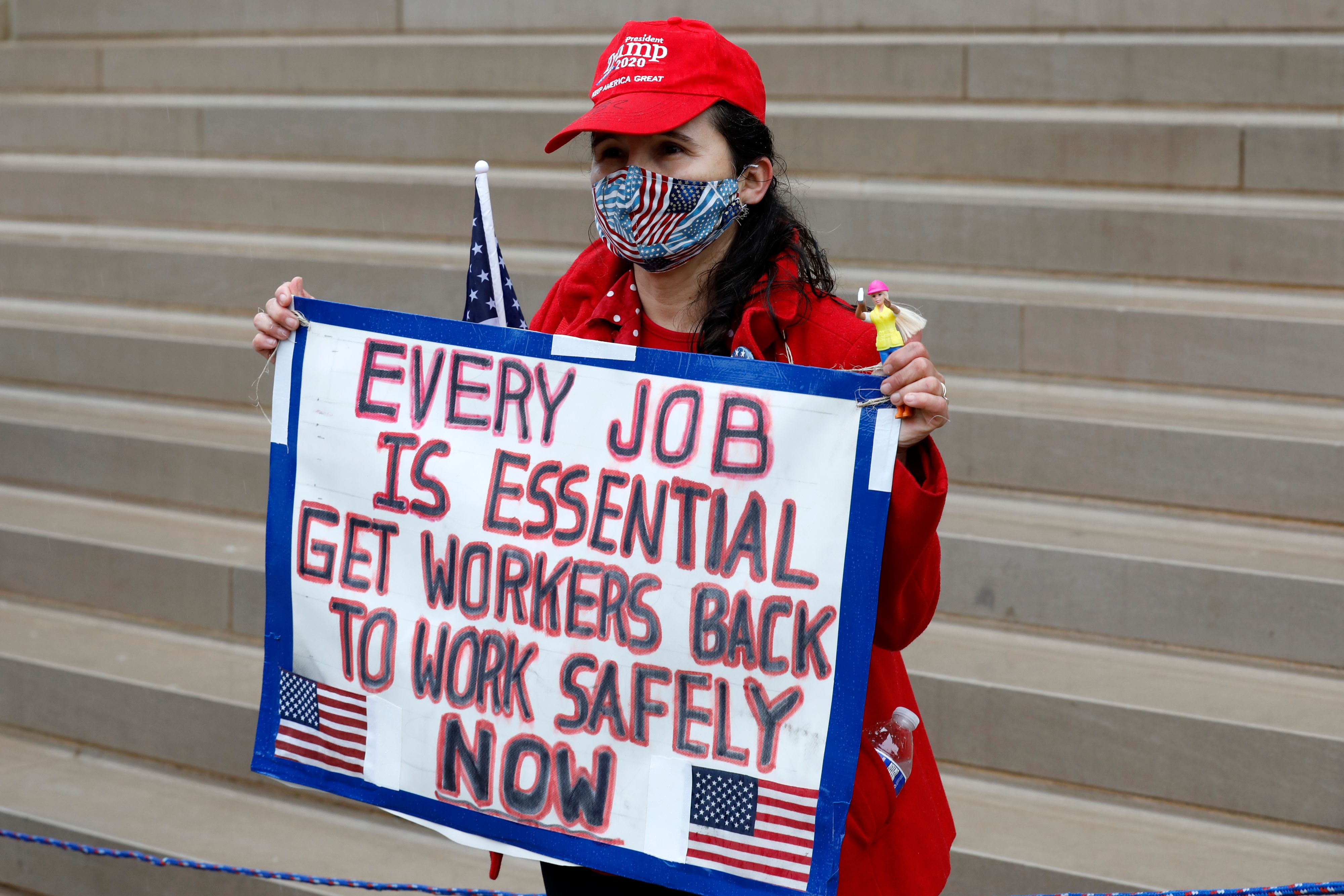 Demonstrators take part in an “American Patriot Rally,” organized on April 30, 2020, by Michigan United for Liberty on the steps of the Michigan State Capitol in Lansing, demanding the reopening of businesses. (Photo by JEFF KOWALSKY/AFP via Getty Images)

Whitmer has issued more than 100 executive orders imposing “sweeping limitations on nearly all aspects of life for citizens of Michigan,” according to a DOJ press release, “significantly impairing in some instances their ability to maintain their economic livelihoods.”

Her orders discriminate against businesses and treat them differently, allowing some to remain open while others are forced to close, the lawsuit stated. Plaintiffs include a real estate brokerage, an automotive glass exporter, a lawn and property maintenance company, a jewelry store, an engine oil and auto parts distributor, a dentist’s office and an association of car washes.

U.S. Attorney for the Eastern District of Michigan Matthew Schneider said in a statement that though he does not doubt Whitmer’s good intentions, the executive orders “arbitrarily discriminate” by allowing certain businesses to open while others must close.

“Under the Governor’s Orders, it’s ok to go to a hardware store and buy a jacket, but it’s a crime to go inside a clothing store and buy the identical jacket without making an appointment,” he said. “That’s arbitrary. As important as it is that we stay safe during these challenging times, it is also important to remember that we do not abandon our freedoms and our dedication to the rule of law in times of emergency.”