Governors and mayors across the United States have issued orders during the coronavirus pandemic that restrict or prohibit religious services, and the Department of Justice has pushed back against such restrictions on multiple occasions.

Attorney General William Barr set the tone for the U.S. Department of Justice’s attitude towards religious freedom during the pandemic by warning in an early April statement that “even in times of emergency,” federal law prohibits religious discrimination. 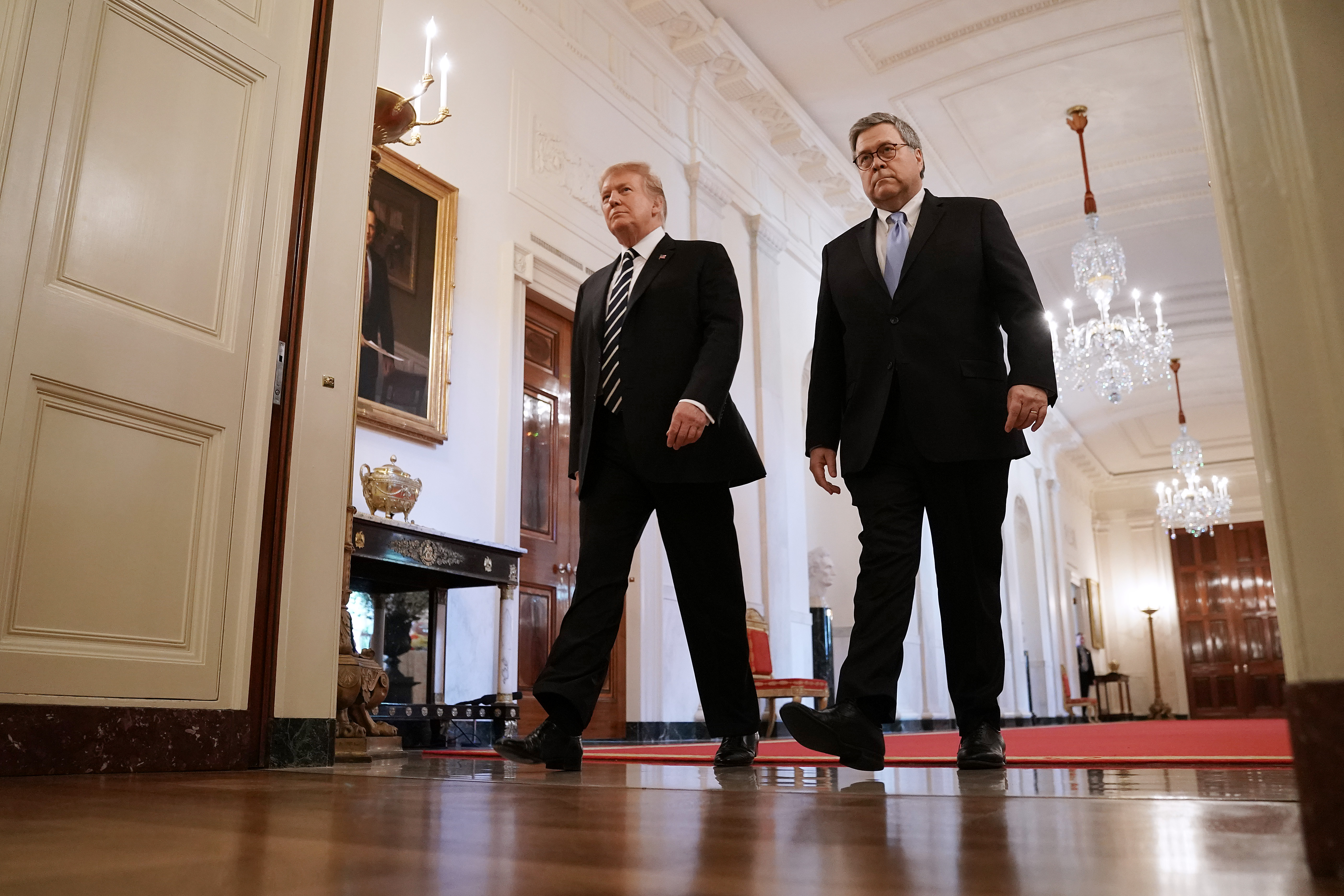 WASHINGTON, DC – MAY 22: U.S. President Donald Trump (L) and Attorney General William Barr arrive together for the presentation of the Public Safety Officer Medals of Valor in the East Room of the White House May 22, 2019 in Washington, DC. Comparable to the military’s Medal of Honor, the Medal of Valor was established in 2000 by President Bill Clinton. (Photo by Chip Somodevilla/Getty Images)

Barr also promised that the DOJ would be watching for any state or local government that “singles out, targets, or discriminates against any house of worship for special restrictions.”

Since this statement was issued, the DOJ has intervened in multiple cases of government crackdowns on churches and pastors, specifically in Nevada, California, Oklahoma, Illinois, Virginia, and Mississippi.

Civil Rights Division Assistant Attorney General Eric Dreiband notified Democratic Nevada Gov. Steve Sisolak in a Monday letter that the governor’s May 13 emergency order subjected churches and other faith based organizations to restrictions that were not applied to businesses and other organizations.

Section 17 of Emergency Directive 18 allowed restaurants to operate at 50% capacity, the letter notes, but the order prohibited places of worship from holding services of 10 or more people.

“We understand these directives were issued in the midst of an uncertain situation, which may have required quick decisions based on changing information,” the letter said. (RELATED: ‘Get Me Off Of House Arrest’: Pastors Call On Barr, DOJ To Protect Religious Liberty)

“We are concerned, however, that the flat prohibition against ten or more persons gathering for in-person worship services — regardless of whether they maintain social distancing guidelines — impermissibly treats religious and nonreligious organizations unequally.”

Dreiband urged Sisolak to “help preserve the Free Exercise Clause of the First Amendment by amending earlier Emergency Directives and remedying their unequal treatment of places of worship.”

Following the DOJ letter, Sisolak announced Tuesday as part of the second phase his plan for reopening the state’s economy that starting Friday religious organizations with strict social distancing requirements may hold services with 50 attendees or fewer.

“I am confident faith leaders will follow the guidance and restrictions necessary to protect the health and welfare of their communities,” Sisolak said.

The DOJ also filed a statement of interest May 22 in an Illinois federal court that supported Republican Illinois state Rep. Darren Bailey’s lawsuit against Democratic Illinois Gov. J.B. Pritzker. Bailey’s lawsuit was brought before a judge May 15 and a hearing was scheduled to take place May 21, but the governor removed the case to a federal district court, according to a DOJ press release.

“According to the lawsuit,” the DOJ’s press release said, “the Governor’s actions are not authorized by state law, as they extend beyond the 30-day time period imposed by the Illinois legislature for the Governor’s exercise of emergency powers granted under the Act.”

Dreiband said in a statement that Pritzker owes it “owes it to the people of Illinois to allow his state’s courts to adjudicate the question of whether Illinois law authorizes orders he issued to respond to COVID-19,” reminding Pritzker that all governors must comply with the law, “especially during times of crisis.”

“The Department of Justice remains committed to defending  the rule of law and the American people at all times, especially during this difficult time as we deal with COVID-19 pandemic,” Dreiband added.

The DOJ statement of interest states that the case belongs in the Illinois state court since the “sweeping nature” of Pritzker’s orders “may affect millions of lives and raise significant constitutional concerns in other litigation.”

Illinois’s current stay-at-home order still prevents religious services from having more than 10 people present, and the state does not plan on allowing religious services with 50 or fewer people until phase four of Illinois’ reopening plan in late June.

The DOJ warned Democratic California Gov. Gavin Newsom in a May 19 letter that though the DOJ understands California’s responsibility to protect the health and safety of Californians, the state also has a duty to preserve religious liberty during the pandemic.

Dreiband said that “even in times of emergency, when reasonable and temporary restrictions are placed on rights, the First Amendment and federal statutory law prohibit discrimination against religious institutions and religious believers.”

“Simply put, there is no pandemic exception to the U.S. Constitution and its Bill of Rights,” Dreiband said. (RELATED: California Gov Gavin Newsom Allows Churches To Open At 25% Capacity)

California’s phase two reopening plan does not allow churches to reopen but does allow other types of secular businesses to reopen with social distancing measures, which Dreiband called in his letter “differential treatment.”

“While it is true that social distancing requirements applied to places of worship may inevitably result in much smaller congregations than some faith groups would like, in our experience with other controversies around the country, many places of worship are quite content to operate at 15-25% of capacity in a way that allows for social distancing between family groups,” Dreiband wrote.

“We believe, for the reasons outlined above, that the Constitution calls for California to do more to accommodate religious worship, including in Stage 2 of the Reopening Plan,” Dreiband said.

Newsom announced an updated set of coronavirus restrictions Monday following the letter that allow for the partial reopening of California churches. The new guidelines will allow houses of worship to open if these institutions limit attendance to 25% capacity or to 100 attendees.

The United States Attorney for the Western District of Oklahoma, Timothy J. Downing, asked Norman, Oklahoma, Mayor Breea Clark in a May 8 letter to amend her proclamation restricting religious services.

“Religion and religious worship continue to be central to the lives of millions of Americans,” Downing said, drawing on Barr’s April 15 statement. ” This is true now more than ever. The pandemic has changed the way Americans live their lives.”

“Religious communities have rallied to protect their communities from the spread of this disease by making services available online or in parking lots, leaving pews empty, and in numerous other creative ways that otherwise comply with social distancing and sanitation guidelines. Those efforts may be impeded by Proclamation 2020-07 and its prohibition on the operation of places of worship,” Downing said.

The same day the letter was sent to Clark, the mayor reversed her course and allowed churches to reopen in Norman, Oklahoma. Clark defended this decision by saying that she was going to reopen churches regardless on May 15.

“I will not spend years feuding with the federal government over one week,” Clark said.

The DOJ filed a statement of interest with a Virginia federal court May 3 supporting Lighthouse Fellowship Church, which serves recovering drug addicts and former prostitutes, according to a DOJ press release.

Northam’s executive order initially banned in-person religious services with more than 10 people but permitted “gatherings of workers in any non-retail business and an array of retail businesses, including liquor stores, dry cleaners and department stores,” according to the press release.

Violations of this order were punishable by up to a year in jail and a fine of $2,500.

The press release notes that when Lighthouse Fellowship Church, a church that seats 225, held a service on April 5 attended by sixteen people, police issued a criminal citation and summons to the church’s pastor. The pastor then filed a lawsuit but the district church denied the church’s request for preliminary relief.

The court said at the time that though businesses “may not be essential, the exception crafted on their behalf is essential to prevent joblessness.”

“For many people of faith, exercising religion is essential, especially during a crisis,” Dreiband said in a statement at the time. “The Commonwealth of Virginia has offered no good reason for refusing to trust congregants who promise to use care in worship in the same way it trusts accountants, lawyers, and other workers to do the same.”

Matthew Schneider, U.S. Attorney for the Eastern District of Michigan, who is helping Dreiband oversee the DOJ’s monitoring of religious freedom during the pandemic, also noted that “unlawful discrimination against people who exercise their right to religion violates the First Amendment, whether we are in a pandemic or not.”

“As important as it is that we stay safe during these challenging times, it is also important for states to remember that we do not abandon all of our freedoms in times of emergency,” Schneider said.

The DOJ also filed a statement of interest April 15 in support of a Mississippi church that attempted to hold parking lot services with windows rolled up, listening to the pastor over the radio. Though Greenville, Mississippi, allowed citizens to attend drive-in restaurants with windows open, Barr noted in a DOJ press release, the city fined those who attended the drive in mass at King James Baptist Church.

“The City appears to have thereby singled churches out as the only essential service (as designated by the state of Mississippi) that may not operate despite following all CDC and state recommendations regarding social distancing,” Barr said. (RELATED: ‘Tyrant Beshear’: Worshipers Attending Kentucky Easter Drive-In Service Find Nails Dumped On The Road, Police Presence)

“Where a state has not acted evenhandedly, it must have a compelling reason to impose restrictions on places of worship and must ensure that those restrictions are narrowly tailored to advance its compelling interest,” Barr said. “While we believe that during this period there is a sufficient basis for the social distancing rules that have been put in place, the scope and justification of restrictions beyond that will have to be assessed based on the circumstances as they evolve.”

The DOJ press release noted that Greenville later said it would drop the fines against those who attended the drive in service but would continue to enforce the order.