“It is time to end New York’s experiment in absolute monarchy,” said Thomas More Society Special Counsel Christopher Ferrara in a statement provided to the Daily Caller News Foundation. “We are asking the court to put an end to these unconstitutional executive orders and their prejudicial enforcement.”

The Thomas More Society’s complaint lists a number of alleged abuses of power, accusing the defendants of exploiting the pandemic to create “a veritable dictatorship” through Cuomo’s executive orders, of selectively enforcing social distancing through fines and punishments, and more.

The lawsuit accuses Cuomo, de Blasio, and James of infringing on freedoms of religion, speech, assembly, expressive association, and due process, according to a press release from the Thomas More Society, and Senior Judge Gary L. Sharpe has ordered the defendants to file a response by noon on June 15. (RELATED: De Blasio Says Playgrounds Are ‘Too Much Of A Risk’ For COVID-19, But Floyd Protests Encourage Real Change)

“These orders, both the emergency stay-home and reopening plan declarations, clearly discriminate against houses of worship,” Ferrara said. “They are illegally content based, elaborate, arbitrary and pseudo-scientific.” 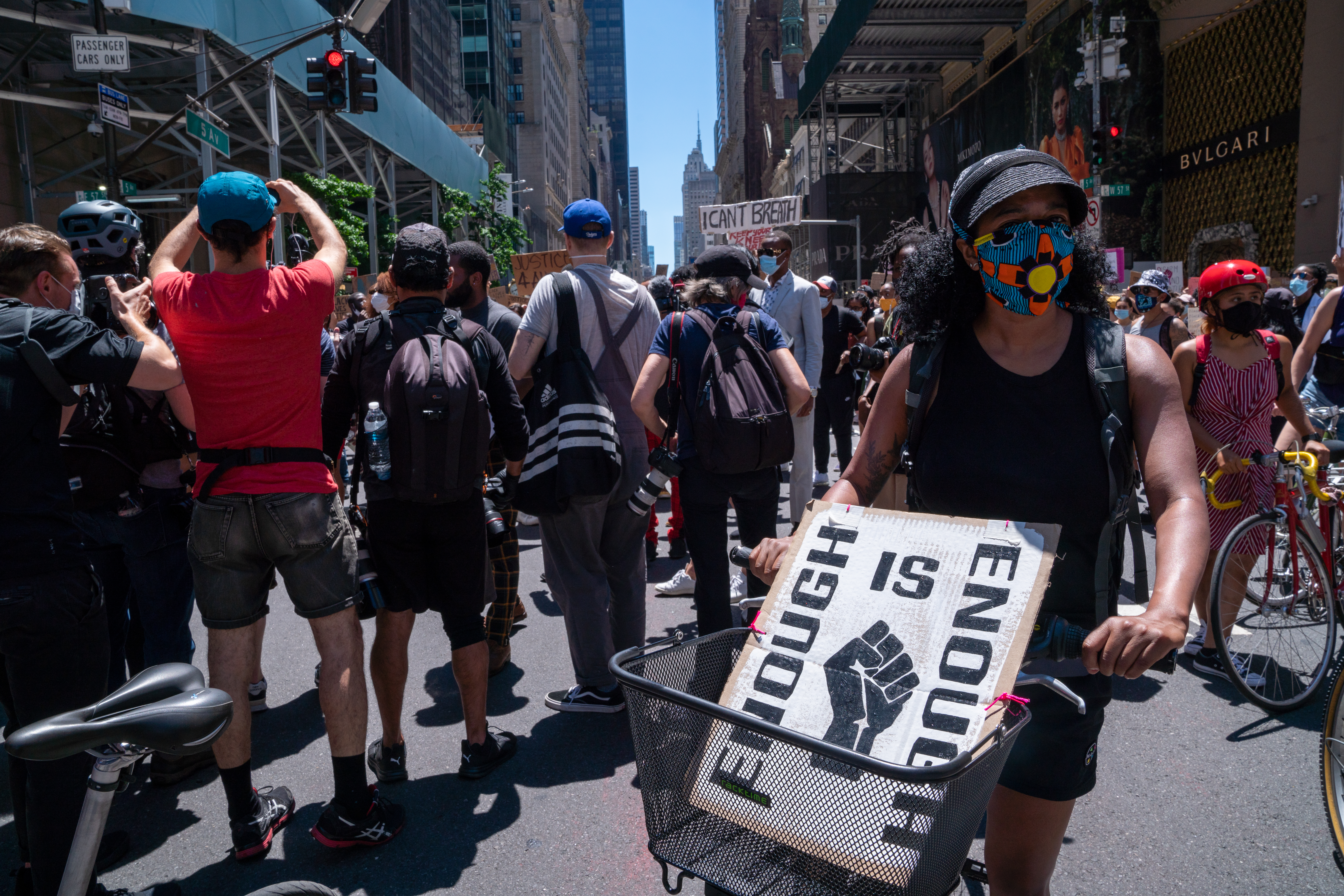 People join with the group Strategy for Black Lives to protest at Trump Tower demanding police reform and the support of Black Womxn’s Empowerment on June 12, 2020, in New York City. Protests continue on the eighteenth day across the nation in response to the death of George Floyd at the hands of a Minneapolis police officer. (Photo by David Dee Delgado/Getty Images)

The lawsuit comes as de Blasio and Cuomo allow protests and riots to go on throughout both New York City and the state while religious services have been banned or restricted. Protests have erupted across the country in response to the death of George Floyd, who died May 25 in Minneapolis police custody after an officer knelt on his neck for more than 8 minutes, a video of the incident showed.

“The governor and his agents, along with New York City’s mayor have employed favoritism and political platforms against people of faith,” Ferrara added. “Why is a large worship gathering deemed more dangerous than a mass protest, full of shouting, arm-waving people in close proximity to one another?”

De Blasio said Thursday that trips to a playground might be too risky for the spread of COVID-19, but declined to say the same about the protests. (RELATED: Ted Cruz Floats DOJ Investigation After De Blasio Once Again Targets Jewish Community)

The Thomas More Society said in a press release that only days after de Blasio was caught without a face mask at a political gathering in New York City — despite the requirement that all New Yorkers wear face masks and avoid gatherings of more than 10 people — police enforced the state’s ban on gatherings of more than 10 people and kicked a small group of Hasidic Jewish children out of a park.

“I don’t see how any honest observer can look at these mass protest gatherings, taking place during the COVID-19 stay-at-home lockdown orders, which are not only allowed but praised by both the governor of New York and mayor of New York City, even though massive property damage and even death have resulted, and find that the ‘social distancing’ regime Cuomo and de Blasio have imposed on religious and other gatherings is a neutral and generally applicable policy,” Ferrara told the DCNF. “The mask has fallen from this sham and we now see it for what it is.”

Cuomo did not immediately respond to a request for comment from the DCNF. A spokesman for de Blasio told the DCNF that “the City has to adopt and follow the Governors Executive Orders.”