A federal prosecutor in Virginia excoriated local leaders on Friday at a sentencing hearing for two members of MS-13, saying that officials have ignored the problem posed by the Central American gang due to political correctness.

The pair were convicted of shooting and stabbing a 40-year-old victim in a Henrico, Virginia, park on Dec. 30, 2018.

The incident allegedly stemmed from a dispute over who controlled an area where the gang sold drugs.

Terwilliger, who said he has prosecuted MS-13 cases for a decade, accused local leaders of ignoring the gang’s activities, putting the Hispanic community at risk. 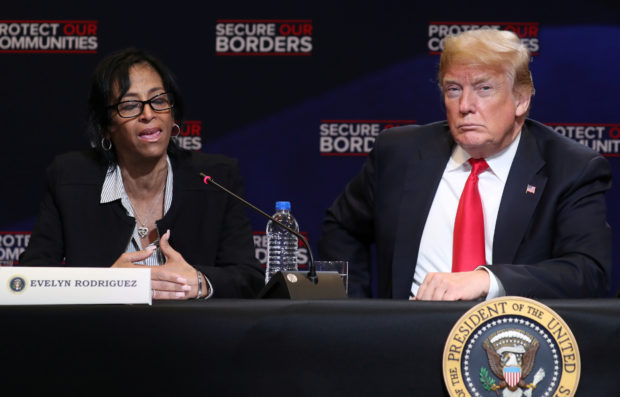 U.S. President Donald Trump listens to Evelyn Rodriguez, whose daughter Kayla Cuevas was killed by MS-13 gang members, as she speaks during a roundtable on immigration and the gang MS-13 at the Morrelly Homeland Security Center in Bethpage, New York, U.S., May 23, 2018. REUTERS/Kevin Lamarque

“By burying their heads in the sand and lacking courage to address a problem because they mistakenly deem it to be politically incorrect,” Terwilliger said, “various community leaders in Northern Virginia simply refuse to acknowledge the gang problem to the detriment of the same Hispanic community they claim to be defending.” (RELATED: Violent MS-13 Gang Attacks Increase Across DC Metro Area)

“No one suffers more at the hands of MS-13 than other individuals of Central American birth or ancestry,” he continued.

Both gang members pleaded guilty to assault with a dangerous weapon in aid of racketeering activity and discharging a firearm during a violent crime. They were sentenced to a combined total of 28 years in prison.

MS-13, which originated in El Salvador, has spread to most major U.S. cities over the past decade. Virginia’s Washington, D.C., suburbs have seen a wave of high-profile MS-13 cases in recent years.

“We cannot prosecute MS-13 out of existence. The community must play a significant role to protect our youth from joining the gang in the first place. I believe that together we can eliminate the gang problem in Northern Virginia.”

Terwilliger, who has served in his role since May 2018, did not identify the local community leaders he said have ignored the scourge of MS-13.