Authorities have opened an investigation into a statue of the Virgin Mary that was burned outside a Boston Catholic Church Saturday.

Boston police responded to reports of a fire at St. Peter Parish in Dorchester, Massachusetts, around 10 p.m. Saturday, according to NBC Boston. The police then discovered that the Virgin Mary statue had been set on fire, the publication reported.

“Whoever is responsible for the desecration of the Holy Mother’s statue is clearly a troubled soul,” Terrence C. Donilon, Secretary for Communications & Public Affairs for the Archdiocese of Boston, told the Daily Caller News Foundation. “Mary represents all that is good and pure in our world.  We have confidence in local law enforcement to investigate this matter.  We pray for the person or persons responsible.”

Someone had set fire to the plastic flowers in the statue’s hands, fire investigators said, causing the the face and upper body of the statue to be burned. The pastor of the church told NBC Boston that St. Peter’s put up the statue decades ago to commemorate servicemen killed during World War II.

“This is obviously someone disturbed, someone who has a lot of trouble, a troubled soul,” he added. “But I know our lady in heaven is looking down on the soul, or whoever it might’ve been, and saying, ‘I love you! If you need help, come get help. We’re here for you.'”

The vandalism is the second attack on an image of the Virgin Mary in the past week: The Diocese of Brooklyn announced Friday that a 100-year-old statue of the Virgin Mary had been vandalized at Cathedral Prep School and Seminary in Queens, New York, and that New York City Police were investigating the matter, according to the Catholic News Agency. 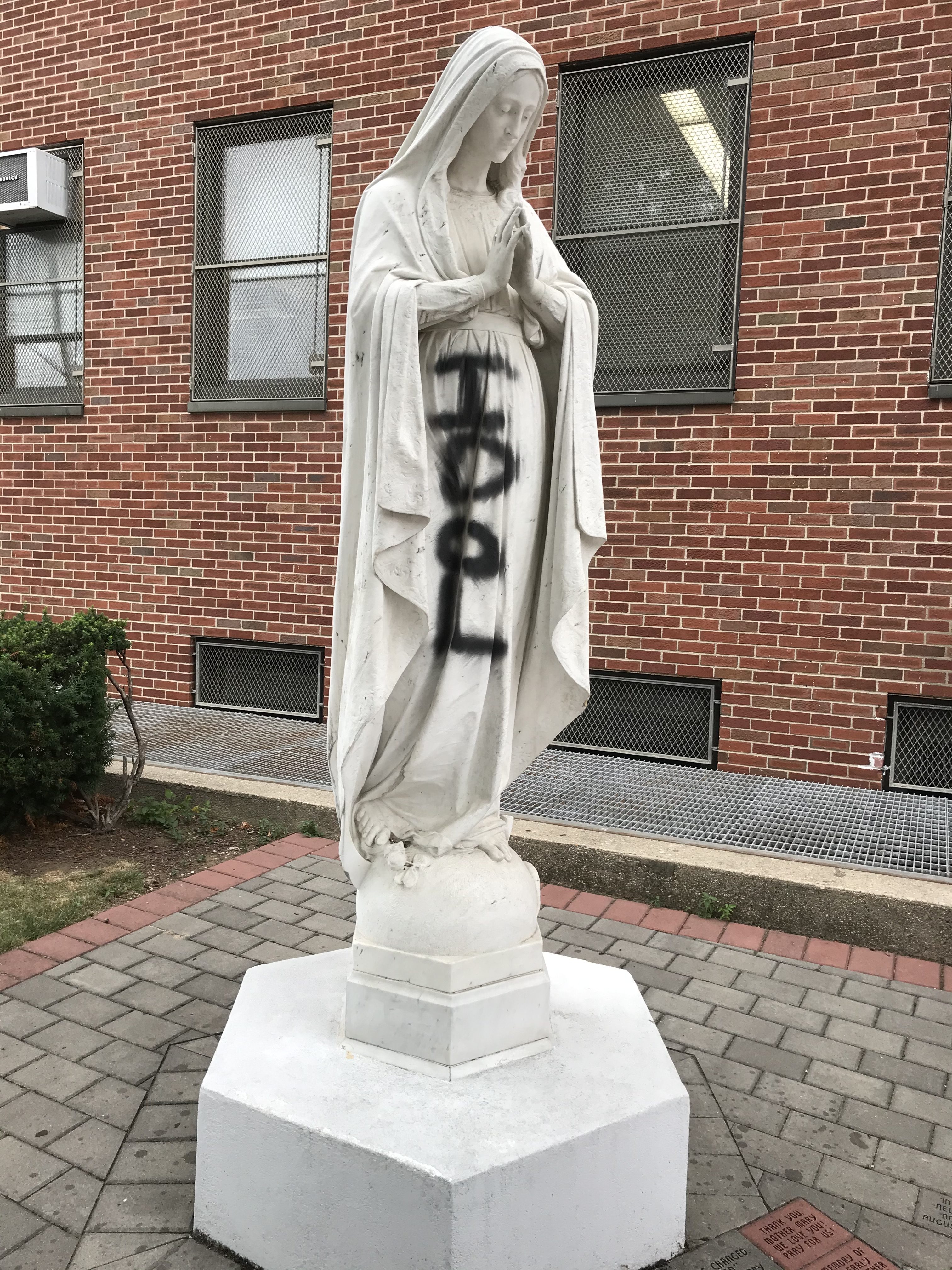 Photo courtesy of the NYPD

Security footage of the incident shows an individual writing the word “IDOL” on the statue around 3 a.m. Friday morning, Catholic News Agency reported.

“Obviously, this tragedy saddens us deeply but it also renews our hope and faith in the Lord as he has shown his goodness in the many people who have already reached out to us,” said Fr. James Kuroly, rector and president of Cathedral Prep.

“We are sincerely grateful for the help we have received as well as the prayers. Please continue praying for those who committed this act of vandalism and hatred toward Our Lady and the Church.”

The Boston Police Department and NYPD did not immediately respond to requests for comment from the Daily Caller News Foundation.