The federal agency United States Agency for International Development (USAID) has distributed instructions to employees for how to interact with LGBTI+ people, which includes directions on how to use pronouns and graphics representing gender spectrums.

The documents shared with the Daily Caller appeared to have been created by the Gender and Sexual Minorities Resource Group for USAID employees. They are formatted like an introductory subject manual, with “key concepts” and “terms” sections, as well as “do” and “do not” suggestions. The series has the stated goal of informing employees on how to “interact with members of the LGBTI+ community.”

The Gender and Sexual Minorities Resource Group did not appear on a search of USAID’s website. It is unclear in what capacity the group operates within USAID.

Among the terms defined in the documents are “gender & sexual minorities,” “microaggression,” “misgendering,” “sex assigned at birth” and “gender-neutral language.” 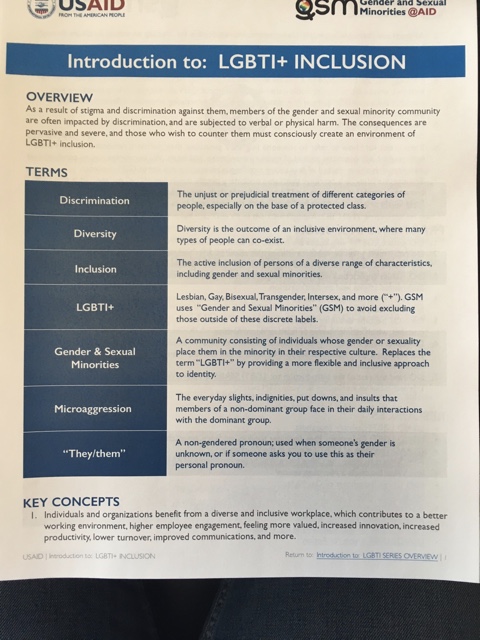 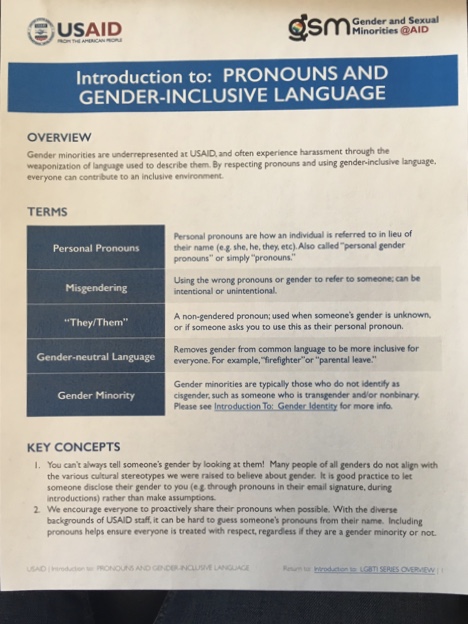 “DO NOT make jokes or reinforce stereotypes about LGBTI+ people, such as about behavior or gender expression,” the manual says, calling such behaviors a “common microaggression.” 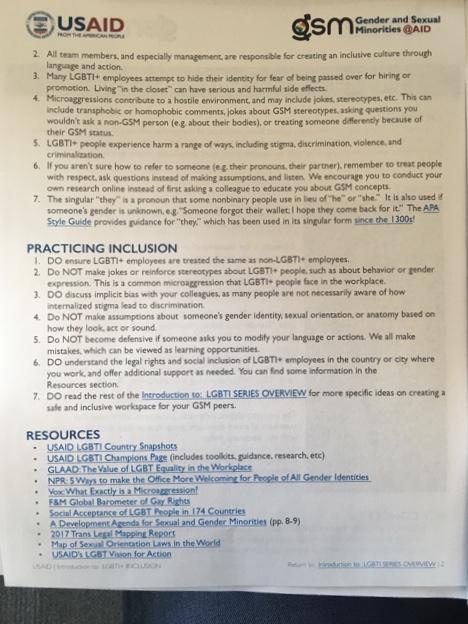 USAID’s current acting administrator is John Barsa, who has worked in both President Donald Trump and George W. Bush administrations in various roles. Trump appointments to the agency have faced backlash for expressing incendiary views in the past, creating concern among USAID staff. USAID’s deputy White House Liaison Merritt Corrigan had remarked that America is “in the clutches of a ‘homo-empire’” that pushes a “tyrannical LGBT agenda.”

Bethany Kozma, USAID’s deputy chief of staff, was critical of gender identity policies. Kozma wrote in the Daily Signal in 2016 that “it is not transgender persons who I am concerned about hurting my children.”

“Instead, I’m concerned about those who will abuse these new policies,” Kozma wrote regarding the Obama administration’s protections of transgender students using restrooms and locker rooms that match their gender identities.

He also issued a public statement expressing his “full confidence” that each USAID political appointee will implement the president’s policies after “recent news article attacks” on Kozma, Corrigan and appointee Mark Kevin Lloyd, who had reportedly called Islam “a barbaric cult,” according to the Associated Press. 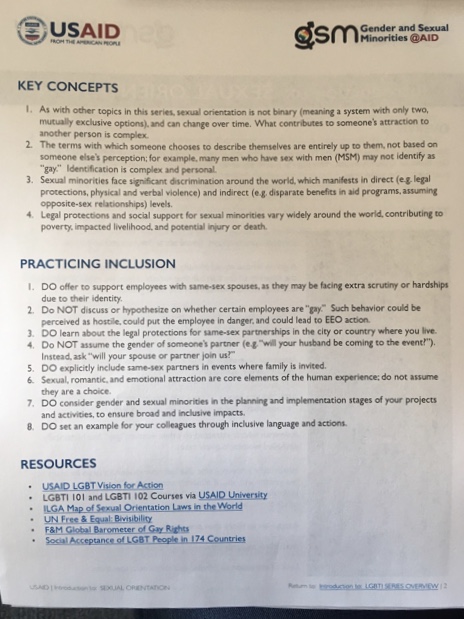 “You can’t always tell someone’s gender by looking at them!” one of the “Key Concepts” sections in the documents reads. “Many people of all genders do not align with the various cultural stereotypes we were raised to believe about gender.”

If someone’s gender is unknown, the manual instructs the employee to instead use “they” when referring to the person, which is more inclusive than using “he” or “she.” It also states that “Mx.” is the gender-neutral version of “Mr./Mrs./Ms.”

If an employee uses the wrong pronouns, they are told to thank the person correcting them, “apologize, move on, and commit to using the correct language.” 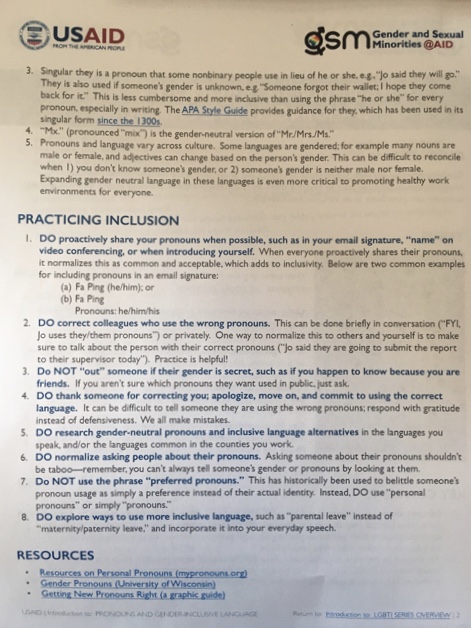 Employees are encouraged to share their pronouns as often as possible, such as in email signatures and when introducing oneself. To practice inclusion, the guide advises against using the phrase “preferred pronoun,” which can “belittle someone’s pronoun usage as simply a preference.”

Gendered terms, like maternity leave, should be replaced with “parental leave.” Employees should also avoid representing women as wearing skirts and high heels, which reinforces a gender stereotype. People who fall outside the sex and gender binary should receive additional options on forms and restrooms. 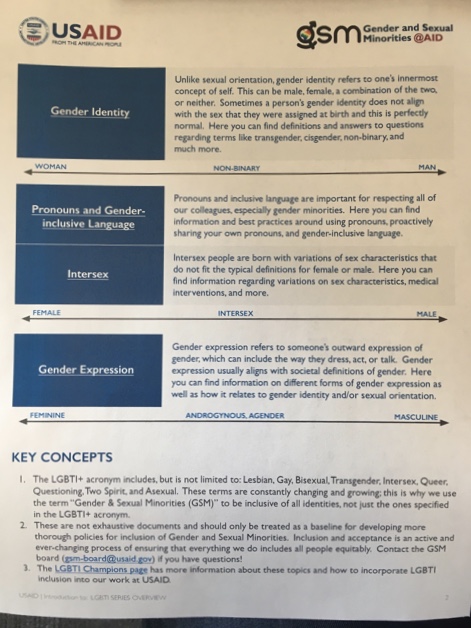 The manual states in a “Key Concepts” section that “sexual orientation is not binary, and can change over time.” It then states that the terms with which someone chooses to describes themselves is up to them and no one else, and gives the example of “many men who have sex with men (MSM) may not identify as ‘gay.’”

“Like gender, gender expression, sexual orientation, and many other parts of life, sex is not binary; it exists on a spectrum,” the manual reads. There are also multiple visuals of a spectrum within the manual. In the section titled “Introduction to: INTERSEX” there’s a spectrum with a range from “female” to “intersex” to “male.”

In the section about gender expression, the spectrum has “feminine” on the far-left end, “androgynous, agender,” in the center, and “masculine” on the far right. Another “gender identity” spectrum ranges from “woman” to “non-binary” to “man.”

USAID did not provide the Daily Caller with comment in time for publication.