Very few details about the contents of his acceptance speech — written primarily by senior adviser to the president Stephen Miller and Trump himself — were leaked to the media ahead of his delivery, which alternated from celebrating “our great American story” and criticizing former Vice President Joe Biden and the Democratic Party. 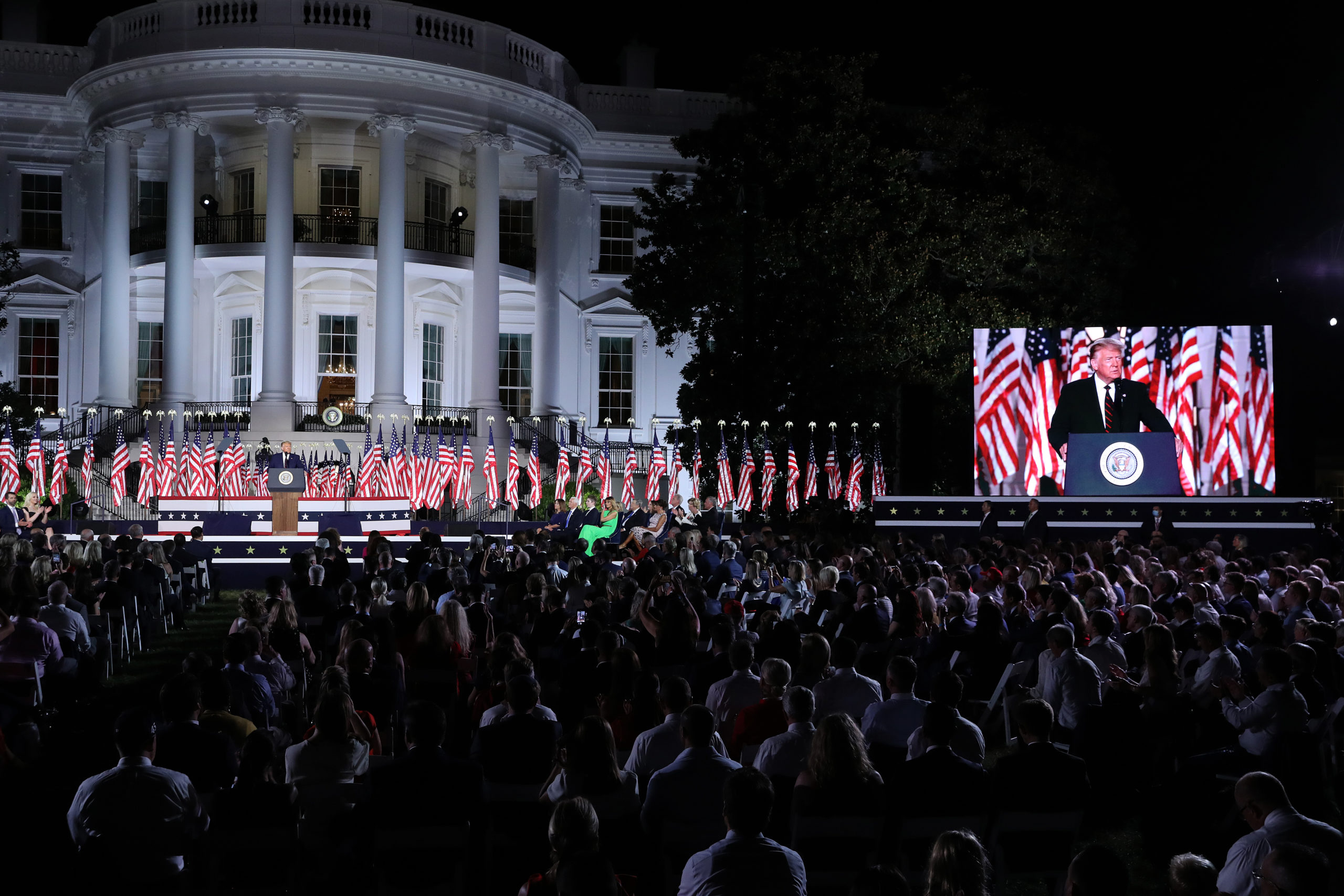 “We understand that America is not a land cloaked in darkness,” Trump told the more than 1,000 attendees gathered at the White House. “America is the torch that enlightens the entire world.” (RELATED: White House Is Compiling A ‘Dossier’ Of Reporters Publishing ‘False’ Articles Regarding Trump, Deputy Press Sec Claims)

Trump remarked that the speech’s venue shows the “miracle of our American story.” The White House, he added, has been home to America’s wartime presidents “who led our soldiers in the cause of freedom” before noting that America is currently waging war against a new “invisible enemy.”

“We will defeat the virus and the pandemic and emerge stronger than ever before.”

Turning his attention to his November opponent, Trump claimed there never has been a “clearer choice between two parties, two visions, two philosophies or two agendas.”

“This election will decide whether we will defend the American way of life or allow a radical left movement to completely dismantle and destroy it,” he stated. “It will not happen.”

After mocking Biden for taking donations from blue-collar workers and giving them “kisses,” Trump proceeded to contrast his time in office with Biden’s 47-year political career.

Touting “historic criminal justice reform, prison reform, Opportunity Zones, and long-term funding of historically black colleges and universities, and “the best unemployment numbers for African-Americans, Hispanic Americans, and Asian Americans ever recorded,” he claimed to “have done more in three years for the black community then Joe Biden has done in 47 years.”

He specifically claimed that his administration has spent the past three and a half years undoing foreign policy decisions Biden supported over the past five decades.

“As vice president, he supported the Trans-Pacific Partnership, which would have been a death sentence for the U.S. Auto industry. He backed the horrendous South Korea trade deal, which took many jobs from our country, and which I reversed and made a great deal for our country. He repeatedly supported mass amnesty for illegal immigrants. He voted for the Iraq War. He opposed the mission that took out Osama bin Laden. He opposed killing Soleimani, oversaw the rise of ISIS, and cleared the rise of China as a positive development for the world.”

“That is why China supports Joe Biden and it desperately wants him to win,” Trump continued. “China would own our country if Joe Biden got elected. Unlike Biden, I will hold them fully accountable for the tragedy that they caused all over the world.”

Though Trump said the “Republican Party condemns the rioting, looting arson, and violence we have seen in Democrat run cities all, like Kenosha, Minneapolis, Portland, Chicago and New York, and many others,” he didn’t specifically address the police killings of George Floyd and other black Americans that have sparked widespread protests and riots across the nation this summer.

“There is violence and danger in the streets of many Democrat-run cities throughout America,” he continued. “We must always have law & order.”

Ultimately, the president closed by listing sweeping promises for what he would accomplish with a second term in office.

“This is the unifying national agenda that will bring our country together,” Trump stated. “So tonight, I say to all Americans, this is the most important election in the history of our country. There has never been such a difference between two parties or two individuals in ideology, philosophy, or vision than there is right now.”