Democratic Macomb County Executive Mark Hackel wants to repeal the law that allows Democratic Michigan Gov. Gretchen Whitmer to keep a state of emergency in place indefinitely with no input from the state’s legislature.

“I can’t believe there isn’t more of an outcry,” Hackel told the outlet, referring to the lack of public resistance to unilateral measures such as travel bans, business closures, and mask mandates. “No one person should have endless authority and ability to bypass another branch of government.” 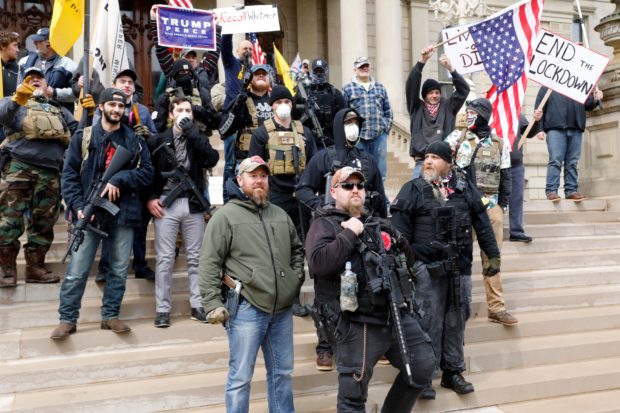 People take part in a protest for “Michiganders Against Excessive Quarantine” at the Michigan State Capitol in Lansing, Michigan on April 15, 2020. (Photo by JEFF KOWALSKY/AFP via Getty Images)

The state of emergency Whitmer declared on March 10 remains in effect.

According to The Detroit News:

The committee Unlock Michigan is seeking to collect 340,047 valid petition signatures to put its initiated legislative proposal to repeal the Emergency Powers of Governor Act before the Republican-controlled Michigan Legislature, which has challenged the emergency powers of Whitmer in court. If Unlock Michigan collects enough valid signatures, the Legislature could enact the repeal without Whitmer being able to veto the proposal.

Whitmer has called the proposal “irresponsible, dangerous and foolish,” the outlet reported.

Meanwhile, Hackel argued that the coronavirus curve has been “flattened” and there is currently “no surge in the hospitals.” The county executive pointed out that casinos are open in the state and Michigan school districts can decide whether to allow in-person instruction. (RELATED: Michigan Gov. Gretchen Whitmer Calls The Big 10 Canceling Football ‘Leadership’)

Hackel called a 1976 law that limits a governor-declared state of emergency to 28 days “sufficient”.

It will likely take a change in Michigan law to overturn Whitmer’s power. Last month, the Michigan Court of Appeals upheld a lower court ruling that stated the governor did not exceed her emergency powers authority.

Michigan has recorded 114,468 cases and 6,781 deaths since the pandemic began in March, according to Worldometers, with the majority of those deaths happening in April and May.