“Over the past week our nation has mourned the loss of a true American legend,” Trump said, calling the late Supreme Court Justice Ruth Bader Ginsburg a “legal giant” and pioneer.”

“For the last three years, Judge Barrett has served with immense distinction,” the president said. “She’s more than a stellar judge but profoundly devoted mother. Her family is a core part of who Amy is. She opened her home and her heart and adopted two beautiful children from Haiti. Her incredible bond with her youngest child, a son with down syndrome, is a true inspiration.”

“If confirmed, Justice Barrett will make history as the first mother of school age children ever to serve on the U.S. Supreme Court,” he added. Trump encouraged lawmakers to quickly confirm Barrett, and to do so with dignity and without personal attacks.

Barrett will replace former Supreme Court Justice Ruth Bader Ginsburg, who died Sept. 18 at the age of 87 due to complications of metastatic pancreatic cancer. Barrett’s pro-life stances contrast sharply to Ginsburg’s fierce defense of abortion access in the United States.

“I’m truly humbled by the prospect of serving on the Supreme Court. Should I be confirmed, I will be mindful of who came before me,” Barrett said. “The flag of the United States is still flying at half-staff in memory of Justice Ruth Bader Ginsburg to mark the end of a great American life.”

“Justice Ginsburg began her career at a time when women were not welcome in the legal profession,” the nominee added. “But she not only broke dealings she smashed them. For that, she has won the admiration of women across the country and indeed, all over the world.”

The Supreme Court nominee has been frank about prioritizing her Catholic faith. (RELATED: Here Are 7 Things You Need To Know About Amy Coney Barrett) 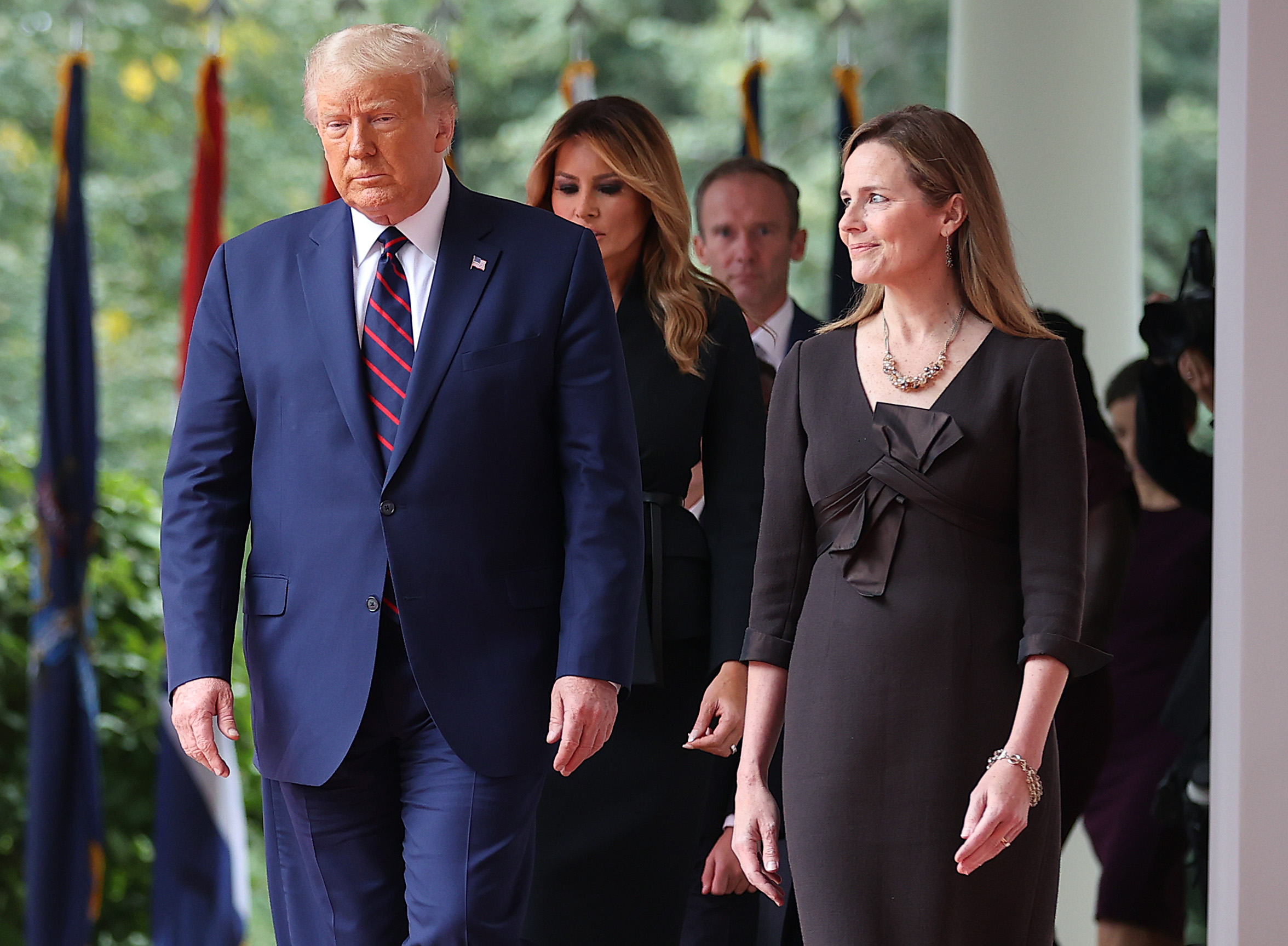 “This confirmation process will be nasty,” Republican Nebraska Sen. Ben Sasse told the Daily Caller News Foundation in a statement Saturday. “Why? Because too many on the left (and sadly some on the right as well) want judges who will substitute their own will for the law.”

“Judge Barrett is not that kind of judge,” he added. “She believes her duty isn’t to arbitrarily slop applesauce on stone tablets and declare new laws — her duty is to cloak her personal views under a black robe and to faithfully uphold the Constitution. That makes her a problem to rabid partisans, and an ally to the rule of law.”

The president appointed Barrett to the 7th Circuit Court of Appeals in 2017, according to the New York Times. Her confirmation hearings gained national attention when Democratic lawmakers questioned her about her Catholic beliefs, suggesting that Barrett’s Catholicism made her unfit to serve as a judge.

“The conclusion one draws is that the dogma lives loudly within you,” Democratic California Sen. Dianne Feinstein told her. “And that’s of concern.”

Feinstein is not the only critic to suggest that Barrett’s views make her unfit to serve on the Supreme Court. Ahead of Trump’s announcement, media outlets linked a Catholic group associated with Barrett to the fictional dystopian novel “The Handmaid’s Tale,” falsely reporting that the Catholic group People of Praise was the inspiration for the book.

Filmmaker Arlen Parsa also called Barrett a “Catholic extremist with 7 children” in a since-deleted tweet, criticizing the nominee for her pro-life views. Parsa noted that he will vote for 2020 presidential candidate Joe Biden, who is also Catholic. (RELATED: Media Calls Biden A ‘Devout Catholic.’ Where Does He Actually Stand With The Catholic Church?)

Republican Nebraska Sen. Ben Sasse said in statement Tuesday: “These ugly smears against Judge Barrett are a combination of anti-Catholic bigotry and QAnon-level stupidity. People of Praise is basically a Bible study — and just like billions of Christians around the world, Judge Barrett reads the Bible, prays, and tries to serve her community.” (RELATED: EXCLUSIVE: ‘Disgusting Attacks On Her Faith’ — Sasse Condemns ‘Anti-Catholic Bigotry’ Against Amy Coney Barrett)

“Senators should condemn this wacky McCarthyism,” he added.