“Attacks on religious liberty have no place in Congress,” Sasse told the DCNF. “The Constitution is pretty simple: No religious tests for office, period.”

“During her confirmation hearing, Judge Barrett faced some disgusting attacks on her faith,” Sasse added. “The anti-Catholic bigotry she and other nominees have seen over the last few years is reprehensible.”

Barrett, who was appointed to the 7th Circuit Court of Appeals in 2017, is reportedly one of three women that President Donald Trump is considering to replace former Supreme Court Justice Ruth Bader Ginsburg, who died Friday at the age of 87 due to complications of metastatic pancreatic cancer.

President Trump: “I will be putting forth a nominee next week. It will be a woman.” #SCOTUS

“Last year, the Senate unanimously affirmed a resolution I introduced condemning bigoted, anti-Catholic tests, and Senators should keep that in mind,” Sasse added, pointing to a resolution he introduced after Democratic California Sen. Kamala Harris suggested that those who adhere to Catholic doctrine may be unfit for office.

Sasse referenced comments made by Democratic lawmakers highlighting Barrett’s adherence to her Catholic faith when she was appointed a federal judge in 2017 – criticisms that have re-emerged as Trump considers nominating her to the Supreme Court.

“And I think in your case, professor, when you read your speeches, the conclusion one draws is that the dogma lives loudly within you,” Feinstein continued. “And that’s of concern.” (RELATED: Amy Coney Barrett Speaks Out On ‘Dogma’ Charge, Religious Tests For Judges)

“If you’re asking whether I’m a faithful Catholic, I am, although I would stress that my own personal church affiliation or my religious belief would not bear on the discharge of my duties as a judge,” Barrett told the senator.

“We have a long tradition of religious tolerance in this country and in fact the religious test clause in the Constitution makes it unconstitutional to impose a religious test on anyone who holds public office,” Barrett said in May 2019.

“I think when you step back and you think about the debate about whether someone’s religion has any bearing on their fitness for office, it seems to me that the premise of the question is that people of faith would have a uniquely difficult time separating out their moral commitments from their obligation to apply the law,” Barrett added. “I think people of faith should reject that premise.”

Criticism of Barrett’s Catholic faith has once again emerged as lawmakers argue over who will replace Ginsburg. (RELATED: Here’s Where The Biden-Harris Ticket Stands On Taxpayer-Funded Abortions, Religious Freedom)

“Amy Coney Barrett, the judge at the top of Trump’s list to replace Ruth Bader Ginsburg, has said we should always remember that a ‘legal career is but a means to an end … and that end is building the Kingdom of God,'” tweeted the Washington Post’s Ron Charles Sunday.

Amy Coney Barrett, the judge at the top of Trump’s list to replace Ruth Bader Ginsburg, has said we should always remember that a “legal career is but a means to an end … and that end is building the Kingdom of God.” https://t.co/PZ4MRB7PLX

Filmmaker Arlen Parsa criticized Barrett as a “Catholic extremist with 7 children” in a since deleted tweet, hitting Barrett for her pro-life views while noting that he will vote for pro-abortion 2020 presidential candidate Joe Biden, who is also Catholic. 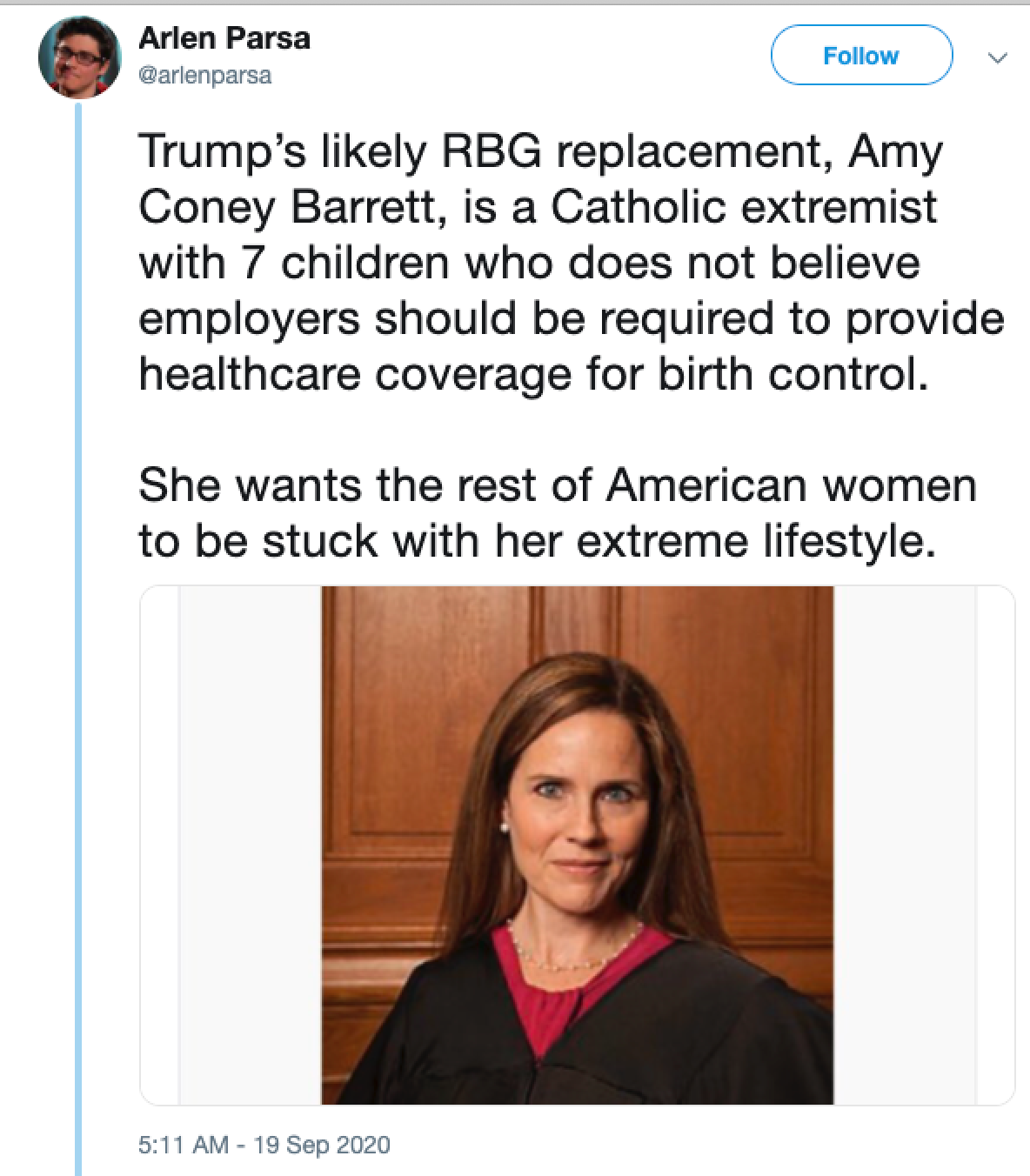 “To be clear: I am voting for a Catholic candidate (Biden),” Parsa tweeted. “I happily voted for one last time too (Kaine). I loved visiting the Vatican! It is not anti-Catholic to say that ACB has extremist views on denying women birth control coverage. The number of kids she has isn’t important.”