Senate Democrats focused on the Affordable Care Act in their opening statements during Judge Amy Coney Barrett’s confirmation hearing Monday, warning that the landmark health care law would be in jeopardy if she is confirmed.

California Sen. Dianne Feinstein, the ranking member of the Senate Judiciary Committee, was the first Democrat to speak Monday morning, saying that Barrett’s nomination could risk health coverage for enrolled under the ACA.

“Health care coverage for millions of Americans is at stake with this nomination,” she said. “We will examine the consequences if, and that’s a big if, Republicans succeed in rushing this nomination through the Senate.”

Feinstein also referred to Texas v. California, which will appear before the Supreme Court on Nov. 10. The case could decide the fate of Obamacare, which has allowed approximately 25 million Americans to obtain health care coverage, she said. (RELATED: Feinstein Invokes The ACA As Democrats Prepare To Question Barrett)

“When he appointed Judge Barrett to fill Justice Ginsburg’s seat, the president said that eliminating the Affordable Care Act would be ‘a big win for the U.S.A.,’” she said. 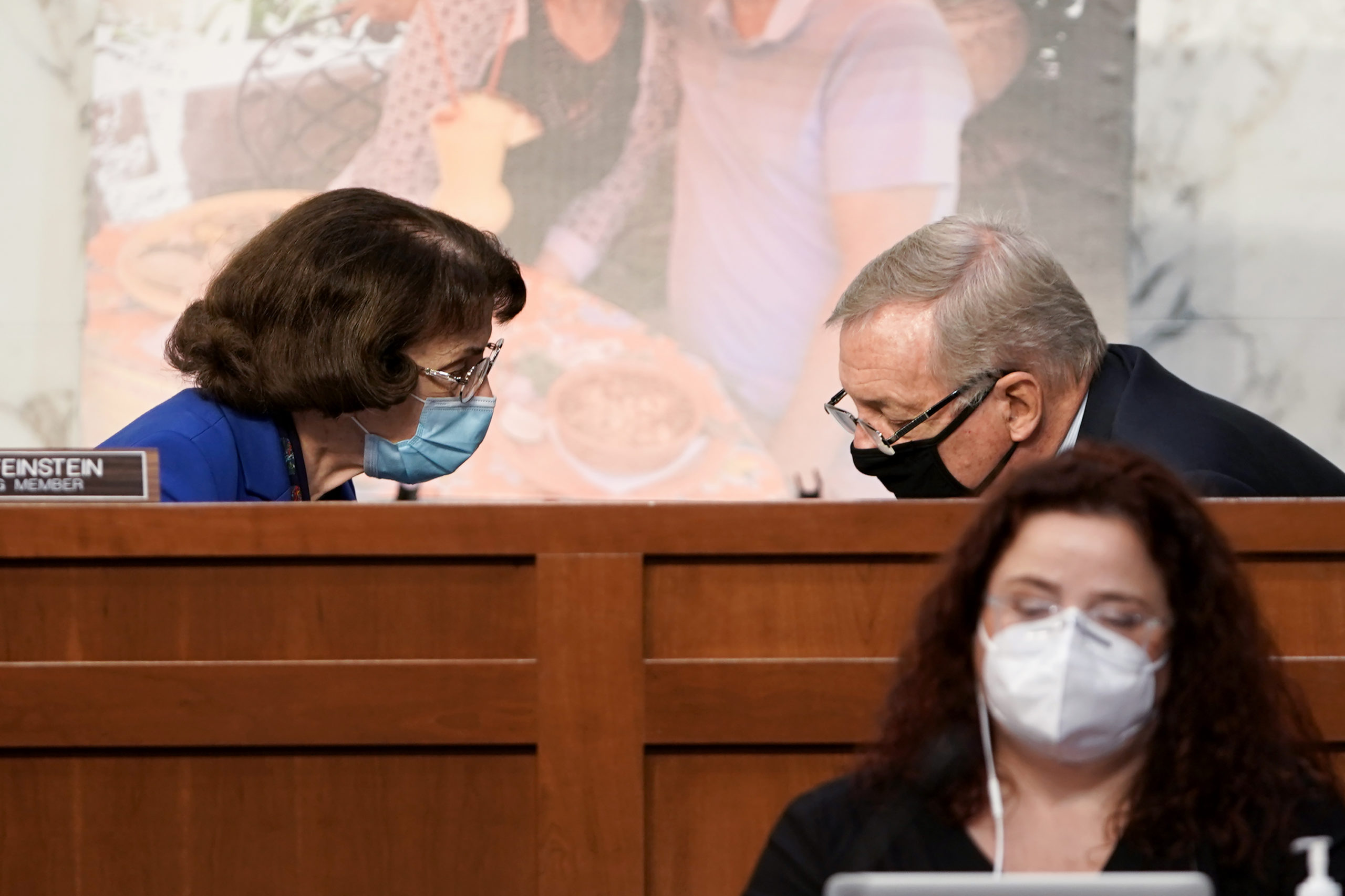 Her comments were echoed by Vermont Sen. Patrick Leahy, who accused Republicans of now having “the potential to accomplish through the Court what they’ve failed to accomplish by votes in the halls of Congress,” referring to Republicans’ numerous failed attempts to repeal President Barack Obama’s biggest legislative accomplishment.

“The top of their hit list is the Affordable Care Act. It’s no coincidence that Republicans are rushing to confirm Judge Barrett before the Court considers the latest Republican-led lawsuit to overturn the ACA on Nov. 10,” Leahy said, adding that “Judge Barrett’s writings have made it unequivocally clear that she considers the act unconstitutional.”

Rhode Island Sen. Sheldon Whitehouse also invoked the Affordable Care Act during his opening statement, saying that if confirmed, Barrett would strike down the health care law. “This Supreme Court nominee has signaled in the judicial equivalent of all caps, that she believes the Affordable care Act must go, and that the precedent protecting the ACA doesn’t matter,” he said.

Though Barrett has hasn’t explicitly said that she would support repealing the Affordable Care Act if appointed, she has criticized the law and previous cases that have upheld it. After Chief Justice John Roberts cast the deciding vote in Arizona v. U.S., the 2012 case which upheld the law, Barrett said that Roberts “pushed the Affordable Care Act beyond its plausible meeting to save the statute” in a Notre Dame journal article.

“It’s beyond ironic that this administration which has failed to respond to this pandemic is rushing through a judge they believe will vote to strip away health care protections,” he said, emphasizing Barrett’s past criticisms of rulings that upheld the act as well. 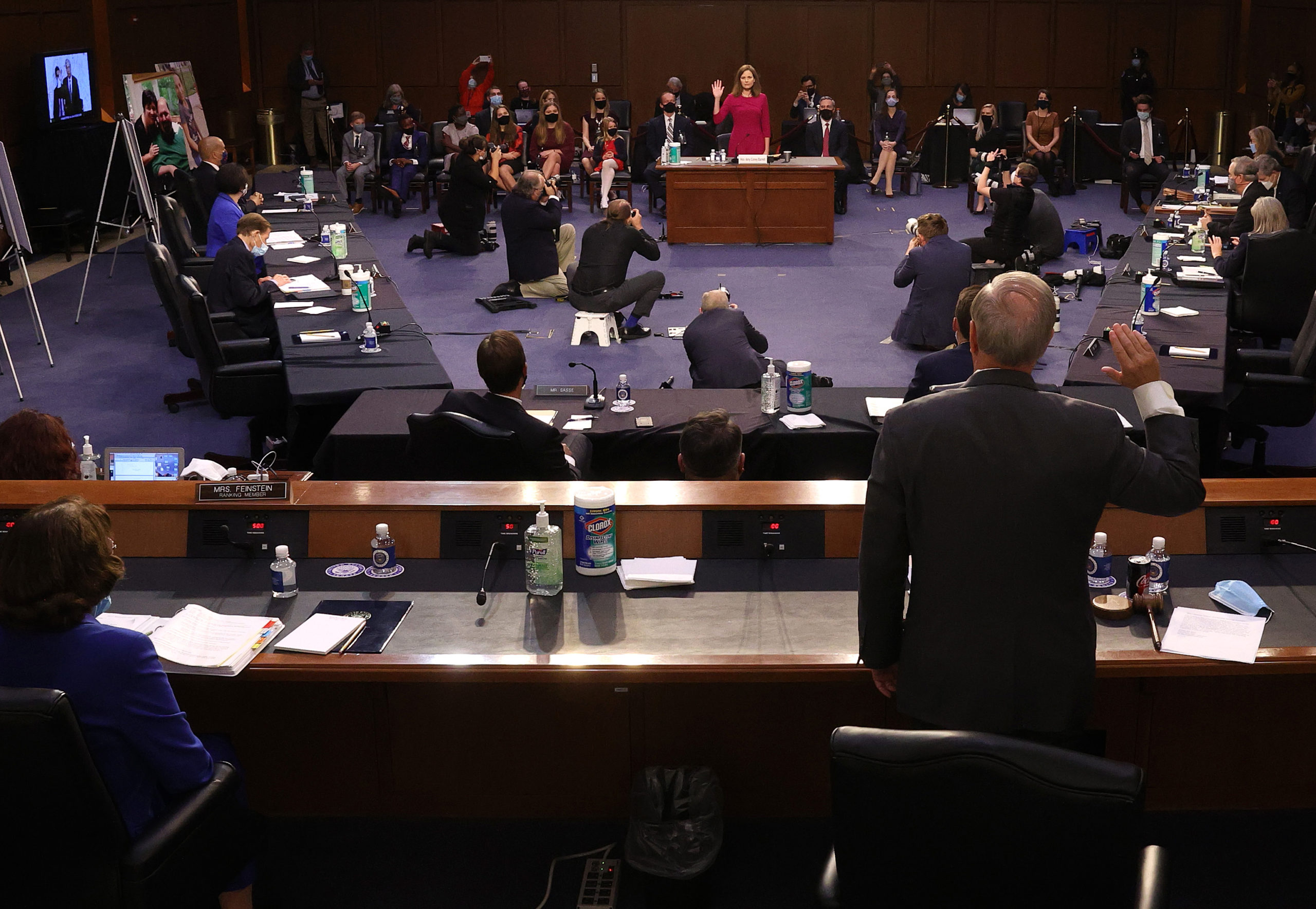 New Jersey Sen. Cory Booker also said Barrett was simply another GOP attempt to abolish Obamacare, remarking that “President Trump has told America he would end the ACA. He promised explicitly that he would only nominate judges that would do the right thing and eliminate the Affordable Care Act.”

The last Democratic Senator to speak was California Sen. Kamala Harris, who accused Republicans of “trying to bypass the will of the voters.” (RELATED: Harris Says That Barrett’s Nomination Threatens The Right To Vote)

“Republicans finally realized the Affordable Care Act is too popular to repeal in Congress. So now they are trying to bypass the will of the voters and have the Supreme Court do their dirty work,” she said. “That’s why President Trump promised to only nominate judges who will get rid of the Affordable Care Act.”

Senate Judiciary Chairman Lindsey Graham said Sunday on Fox News that he expects Barrett to be confirmed in the week before the election.