Democrats have warned that the Affordable Care Act could be overturned if Judge Amy Coney Barrett is confirmed to the Supreme Court, but experts say that the landmark health care law is unlikely to vanish anytime soon.

Democrats have specifically pointed to Texas v. California, which is set to be argued before the Supreme Court on Nov. 10, arguing that Republicans are rushing Barrett’s confirmation in order to solidify the Court’s conservative majority and hopefully overturn the ACA as a result. The suit’s plaintiffs, consisting of Republican attorneys general from across the country, argue that the Act is unconstitutional since its critical component — the individual mandate — was essentially eliminated in the 2017 Tax Cuts and Jobs Act.

“If Judge Barrett is confirmed, America stands to lose the benefits that the ACA provides,” said Sen. Dianne Feinstein, the ranking member of the Senate Judiciary Committee, adding that women would also lose protections including “critical preventative services and maternity care.”

Her comments were echoed by Vermont Sen. Patrick Leahy, who said that with Barrett’s confirmation, Republicans have “the potential to accomplish through the court what they’ve failed to accomplish by votes in the halls of Congress.”

Some healthcare and legal experts, however, see little chance of the suit being successful, even if Barrett is confirmed to the Supreme Court before the case is argued. 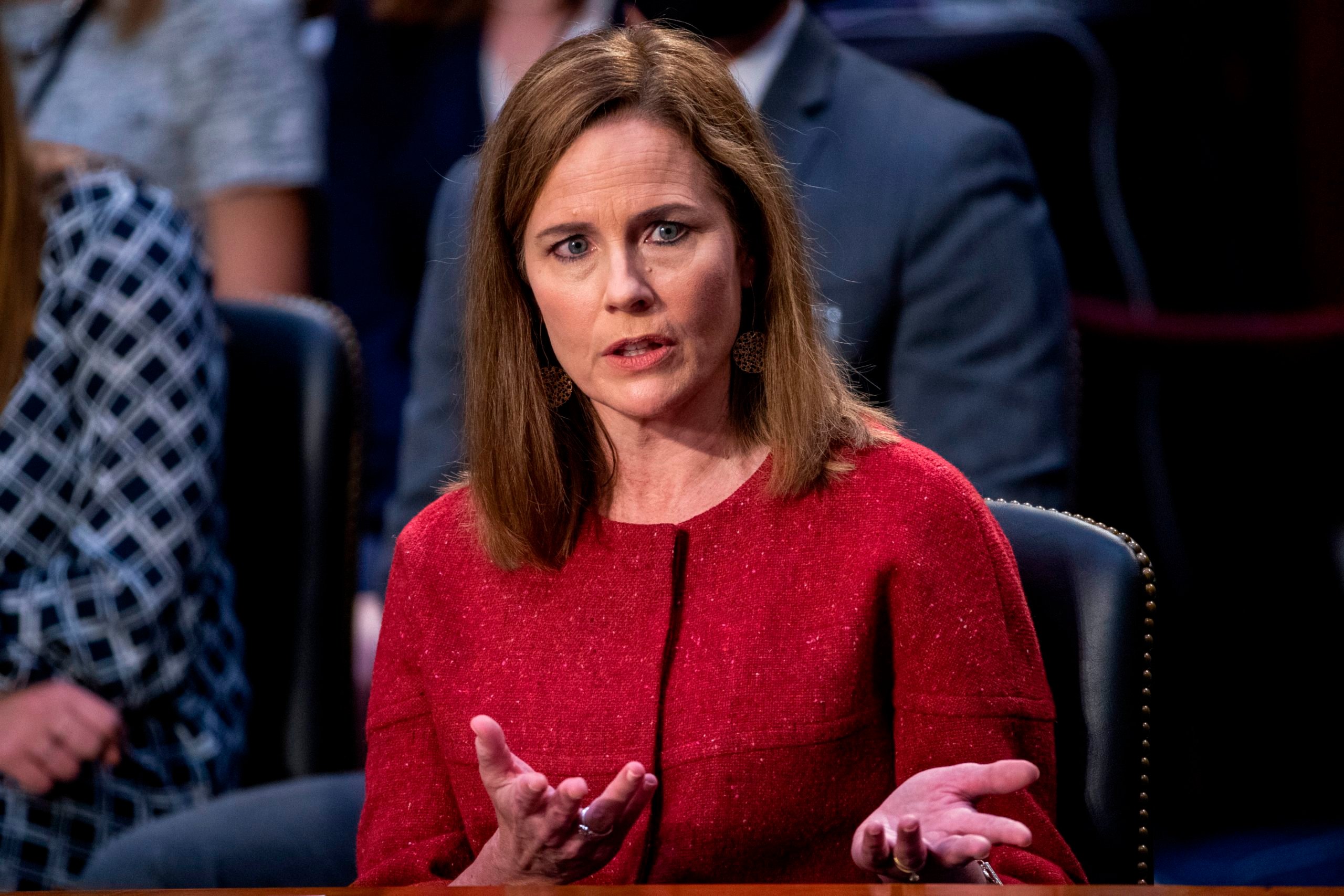 Supreme Court nominee Judge Amy Coney Barrett responds to a question from Democratic Senator from Vermont Patrick Leahy during her confirmation hearing before the Senate Judiciary Committee on Capitol Hill in Washington, DC, on October 13, 2020. (SHAWN THEW/POOL/AFP via Getty Images)

Dr. Joel Zinberg, a senior fellow at the Competitive Enterprise Institute, said that while the Court’s coming ruling is “difficult to know or predict, it’s unlikely [that the ACA is overturned] with or without a Justice Barrett.” (RELATED: Democrats Make Obamacare The Focal Point Of First Day Of Barrett Hearings)

There are three legal components to Texas v. California, Zinberg told the Daily Caller News Foundation: the case’s standing, the constitutionality of the Act’s individual mandate, and whether the mandate, if found to be unconstitutional, can be separated from the rest of the legislation.

In order for the case to even be decided, the plaintiffs must first show their connection to any negative repercussions of the law, something that is not guaranteed.

“The Supreme Court can only decide issues that are properly in front of them. The plaintiffs have to show that they were somehow injured in the statute,” Zinberg said.

While Zinberg told the DCNF that he believes the case has standing, his opinion is not universally shared.

Michael Cannon, the director of health policy studies at the Cato Institute, doubted the case’s legal standing, calling a case “without merit.”

“I don’t think that a Justice Barrett will affect the outcome of this case,” he told the DCNF, “since the plaintiffs don’t have standing to begin with.”

If the case is granted standing, the justices will then decide whether the individual mandate, which imposed a fine for those who did not have private health insurance and deferred enrolling under the Affordable Care Act, is in fact constitutional.

Though still in existence, the fine that the mandate imposed was reduced to zero dollars in the Tax Cuts and Jobs Act, rendering it is largely purposeless.

“It was an essential piece of the original legislation, but it has become clear since in recent years that it was never that important to the ACA,” Zinberg said, a point which was echoed by Cannon as well.

“What Congress did in [the Tax Cuts and Jobs Act] was make the mandate nonfunctional,” he told the DCNF.

Though the mandate’s penalty been eliminated, the plaintiffs in Texas v. California hope that the Supreme Court will declare it unconstitutional, prompting the court to throw out the entire law as a result.

“It’s tough to know, but my suspicion is that the mandate will be declared unconstitutional,” Zinberg said.

Regardless of the upcoming ruling, the mandate has been challenged before. In 2012, when the mandate was still a critical component of the Act, Chief Justice John Roberts was the deciding vote in ruling the mandate as constitutional as a tax, preserving the entire law as a result.

Some opponents of Barrett’s confirmation have pointed to her criticism of Chief Justice John Roberts’ ruling, where she said that he “pushed the Affordable Care Act beyond its plausible meaning to save the statute.”

Demonstrators march past the Supreme Court in the nationwide Women’s March on October 17, 2020, in Washington, DC. Judge Amy Coney Barrett is likely to be confirmed to the Supreme Court to replace the late Justice Ruth Bader Ginsburg. (DANIEL SLIM/AFP via Getty Images)

Even if it the mandate is declared unconstitutional, however, both Zinberg and Cannon doubted that the entire Affordable Care Act will be thrown out, citing its severability.

In short, severability allows for the court hypothetically render the individual mandate unconstitutional while simultaneously preserving the rest of ACA as a whole. If the Texas v. California got to that point, both experts said, there would be a greater chance of a unanimous decision upholding remainder of the law than a split decision throwing it out.

“It’s difficult to know or predict, but I think the court would come to the conclusion that the 10 titles of the ACA are not that related,” Zinberg said. “We’ll have to wait and see, but a Justice Barrett I don’t think would change the coming ruling substantially.”

Zinberg also pointed to Barrett’s own hearing, where she remarked that “the presumption is always in favor of severability,” noting that judges often try to preserve existing laws when possible, a response that drew praise from Democratic Sen. Dianne Feinstein, the ranking member of the Senate Judiciary Committee.

Cannon spoke along similar lines, saying that he “would not be surprised if the court ruled against the plaintiffs nine to nothing.”

“I’m even more confident that having one more appointed justice won’t have an effect. The way I see it, there’s an astronomically small chance that the court might do what Texas wants and over turn all of or even a part of the law,” he added, circling back to his assertion that the case lacked merit due to the plaintiffs’ lack of standing.

“The court generally doesn’t like taking up high profile cases and issues if it doesn’t have to, much less making controversial rulings.”

Even supporters of the ACA, who have warned that overturning the law could lead jeopardize coverage for Americans with preexisting conditions and lead to fewer Americans with health insurance, have said that it is unlikely that the law is overturned.

“It is still unlikely to prevail, but the small chance of a very bad thing happening is worth worrying about,” Nick Bagley, a law professor at the University of Michigan and a supporter of the ACA, told The New York Times.

His comments were echoed by Jonathon Adler, a law professor at Case Western Reserve University, who told The Times that even with a Justice Barrett, the law was unlikely to be struck down: “Replacing Ginsburg could have big effects in lots of areas. I’m just not sure this is one of them.”