A man was reportedly arrested after allegedly severely vandalizing a Catholic Church in Louisville, Kentucky on Sunday, a church statement said.

In the statement, Saint Martin of Tours Church’s pastor, Father Paul Beach, said that a man “who appeared to be experiencing the effects of drug intoxication” broke into the church and severely damaged the front altar.

Friends, please pray for the faithful of Saint Martin of Tours parish, and the Ordinariate community of Our Lady and Saint John, as their beautiful church was vandalized. Pray, too, for the man that did this. pic.twitter.com/zli1X5Zu9l

A security guard at the church was on duty and responded before police arrived to “subdue this individual without further harm being done,” the statement says.

“The first thing I ask of you is to pray for this poor soul who committed these acts, who is so obviously troubled,” Beach says in the statement. He is currently in police custody and will be prosecuted for his crimes.

The Archdiocese of Louisville’s spokeswoman Cecelia Price told the Daily Caller that the parish is working with the insurance company, and she does not believe a cost of the damages has yet been determined.

The church will be closed for the “next several days” while the damage is assessed, according to the statement.

The vandalism follows more than a dozen other crimes targeting Catholic Churches across the country, prompting lawmakers to call on federal authorities to investigate the incidents as religiously motivated. Most recently, the New York Police Department investigated a vandalism at a Brooklyn church in October,  where a Virgin Mary statue had its hand cut off and was cracked along the head, according to ABC 7. A few weeks prior, police in San Antonio investigated vandalism at a Catholic seminary where glass doors were struck and damaged, and a crucifix was desecrated. (RELATED: Crucifix At Catholic Seminary Desecrated, Property Vandalized) 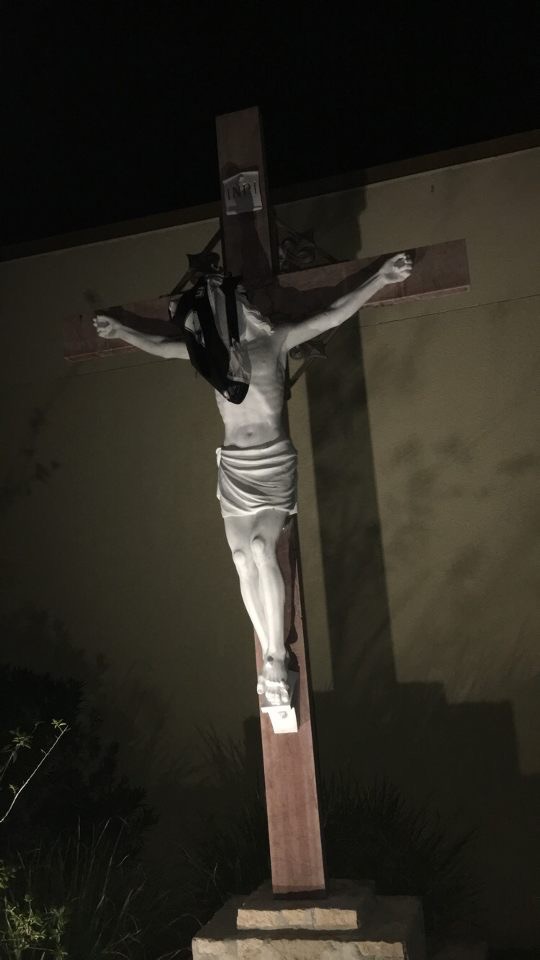 The desecrated statue of Christ at Assumption Seminary in San Antonio. Photo courtesy of Isaiah Ringen

The vandalism in San Antonio occurred a night before Republican Indiana Rep. Jim Banks called on the Department of Justice to investigate “increases in Catholic hate crimes and vandalism” in the United States. Incidents have included vandalism, arson, and attempted murder.

Banks’ request follows letters sent by two other congressmen — Tennessee Republican Rep. Chuck Fleischmann and Louisiana Sen. John Kennedy — to the Department of Justice, addressing the “disturbing trend” of attacks against Catholics through the summer months.

“Catholics are under attack in America. That is a sentence I hoped I would never have to write, but it is the reality we are facing,” Kennedy wrote in a letter to Attorney General Bill Barr in August.