“I think Joe Biden and the Biden family are compromised,” Bobulinski said.

“I just don’t see, given the history here in the facts, how Joe can’t be influenced in some manner based on the history that they have,” Bobulinski said. “So as a citizen and an American taxpayer, I’m very, very concerned.”

Bobulinski explained how he met with Joe Biden in Los Angeles on May 2, 2017, at the request of Hunter and his uncle, Jim Biden, to discuss the Biden family dealings at a high level.

“They were sort of wining and dining me and presenting the strength of the Biden family to get me more engaged and want to take on the CEO role” of the joint business venture between the Chinese energy firm CEFC China Energy Co. and Oneida Holdings, a Delaware-based LLC.

Bobulinksi said it was “crystal clear” that Hunter Biden had brought his father up to speed on the status of a joint venture deal with the before he met with the former vice president. (RELATED: Here Are All The Times Joe Biden Allegedly Talked With Hunter About His Foreign Business Dealings)

“They were putting their entire family legacy on the line. They knew exactly what they were doing. They were dealing with a Chinese owned enterprise … that had strong financial support and political support from the Chinese Communist Party. That’s how it was presented to me. That’s not my own words. That’s how they presented it to me and read me in on it,” Bobulinski said.

Bobulinski recalled bringing up his concerns with Jim Biden the following day after his meeting with the former vice president that their business dealings with the Chinese could impact his brother’s 2020 presidential aspirations.

“I know Joe decided not to run in 2016, but what if he ran in the future? Aren’t they taking political risk or headline risk? And I remember looking at Jim Biden and saying, ‘How are you guys getting away with this? Like, aren’t you concerned?'”

“And he certainly looked at me and he laughed a little bit and said, ‘plausible deniability.'” Bobulinski said.

Later that day, Bobulinski described a second meeting he had with Joe Biden in a parking lot in which the former vice president told him to “keep an eye on his son and brother.”

Joe Biden is not named in any corporate documents for Oneida, despite a much-publicized May 13, 2017, email Bobulinski received from Hunter Biden associate James Gilliar saying that 10% of the firm would be “held by H for the big guy.”

Bobulinski said the “big guy” in the email is a reference to Joe Biden.

Jim Biden was granted a 20% stake in Oneida when the deal was finalized on May 22, 2017, up from his proposed 10% stake in Gilliar’s May 13 email, according to documents obtained by the Daily Caller News Foundation and other media outlets. (RELATED: Joe Biden’s Absence From Chinese Venture Business Records Doesn’t Rule Out His Involvement.)

Bobulinski said he did not know why Jim Biden’s ownership in the firm went from 10% as proposed in Gilliar’s email to 20% when the deal was ultimately finalized.

“I’m sure there were discussions within the Biden family. I wasn’t privy to that discussion. But this is Jim Biden, the brother of the potential future president of the United States. It’s not a distant cousin. It’s not an employee. It’s his brother who in  documents defines himself as a political advisor to his brother.”

During negotiations over the structure of Oneida, Hunter Biden texted Bobulinski stating: “both James’ and my Chairman gave an emphatic NO.”

Bobulinski said Hunter Biden was referring to his father when he said, “my Chairman,” in the May 19, 2017, text. 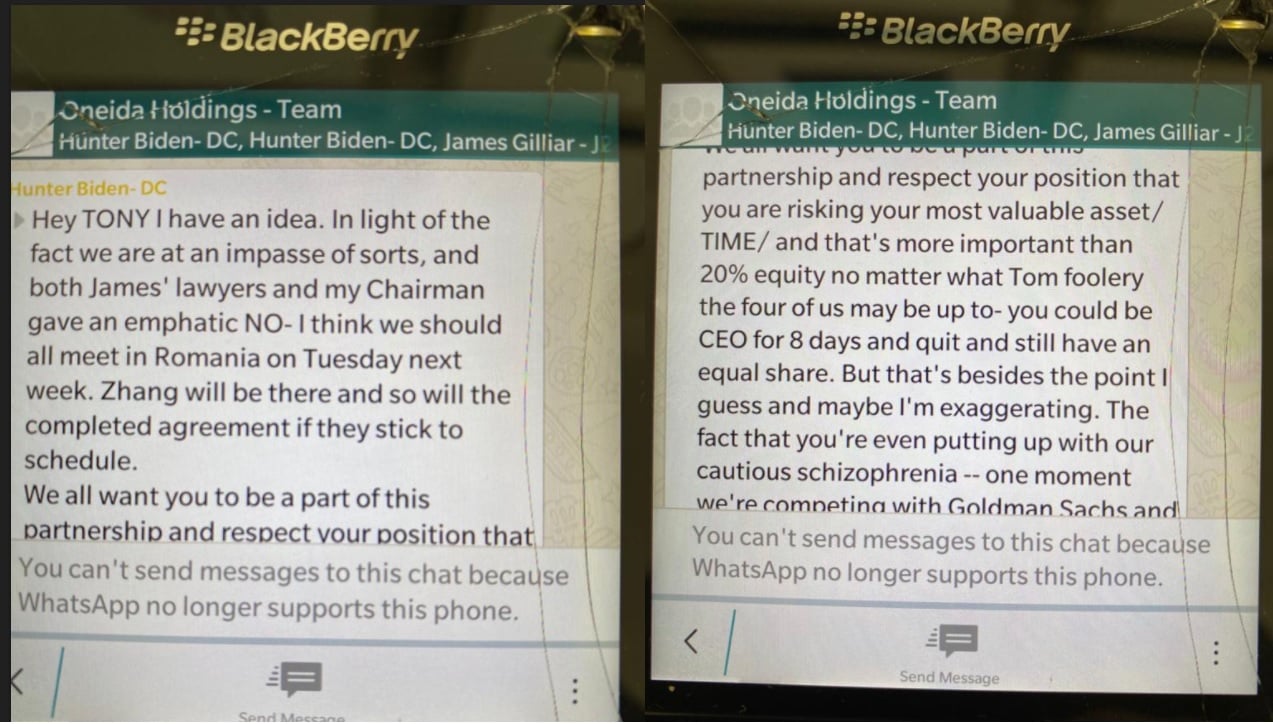 Text messages sent from Hunter Biden to a Oneida Holdings group chat with Tony Bobulinski, James Gilliar and Rob Walker on May 19, 2017.

“What Hunter’s referencing there is he spoke with his father and his father is giving an emphatic no to the ask that I had, which was putting proper governance in place around Oneida Holdings,” Bobulinski said.

To the Chinese involved in the deal, Bobulinski said, “it was always the Biden family… who is obviously led and operated by Joe Biden.”