“President Trump is focused on leading the great American comeback and keeping his promises to the American people,” McEnany wrote. “This low-level, disgruntled former staffer is a liar and a coward who chose anonymity over action and leaking over leading.” (RELATED: Trump’s Former DHS Chief Of Staff Miles Taylor Endorses Biden) 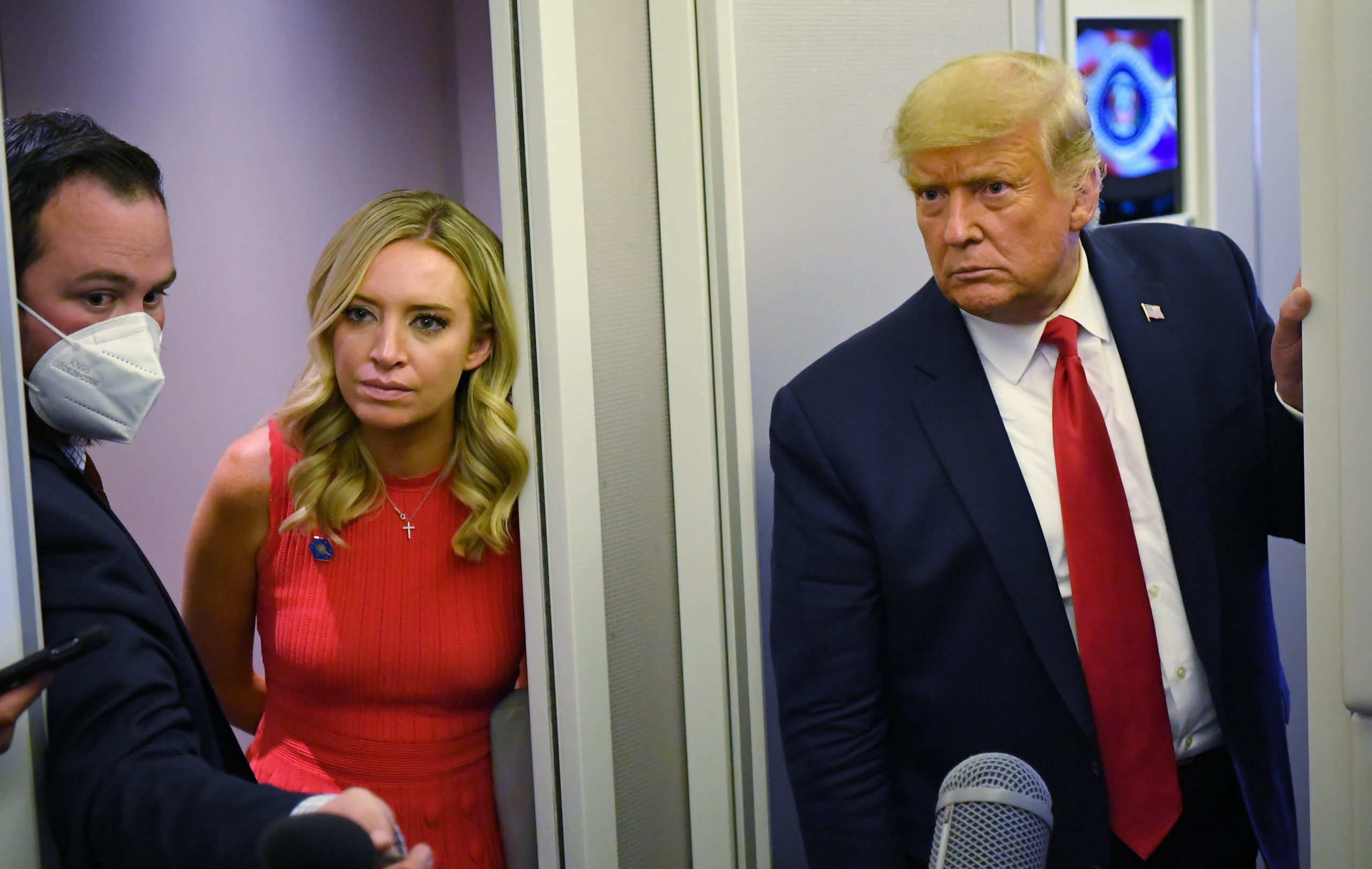 US President Donald Trump, flanked by White House Press Secretary Kayleigh McEnany (L), speaks reporters while in flight aboard Air Force One shortly before landing at Andrews Air Force Base in Maryland on October 19, 2020. (Photo by MANDEL NGAN/AFP via Getty Images)

McEnany further claimed that Taylor “was ineffective and incompetent during his time as DHS chief of staff which is why he was promptly fired after only serving in this role for a matter of weeks.”

“It is appalling a low-ranking official would be granted anonymity and it is clear the New York Times is doing the bidding of Never-Trumpers and Democrats,” she continued. “The American people elected President Trump to carry out his vision for the country, not an arrogant deep state operative trying to put their agenda ahead of the President’s America First Policies.”

In a statement, @PressSec calls former DHS Chief of Staff, who just revealed himself as “Anonymous,” a “low-level, disgruntled former staffer” who is a “liar and a coward.” pic.twitter.com/m0aopRyfSi

You have got to be kidding me. Miles Taylor? That’s who the New York Times granted an anonymous editorial article? I’ve seen more exciting reveals in Scooby-Doo episodes.

What a monumental embarrassment.

Among the long list of colossal embarrassments, and there are many, the best is Miles Taylor writing an op-ed trashing the administration he took a paycheck from… and then lying to CNN, the network he now works for, when asked about it on air. What a little circus clown.

I rolled my eyes so hard I nearly tipped backwards.

To paraphrase Andy Warhol: In the future, everyone will be a Senior Admin Officials for 15 minutes. https://t.co/2quOGWkaHg

“I worked with DHS officials while I was in the White House, and even I had to research who Miles Taylor was,” he stated. “He’s just another standard-issue arrogant, Washington, DC swamp bro who loved President Trump until he figured out he could try to make money by attacking him.”

“The very fact that the Beltway media cared about and hyped up ‘Anonymous’ just emphasizes how derelict they are when they totally ignore the readily visible Biden pay-to-play scandal unfolding before their eyes.”

Taylor, now a CNN contributor and an advisor to multiple anti-Trump Republican groups, made his announcement in a Wednesday post on Medium, shortly after Lincoln Project co-founder George Conway tweeted that a reveal would be made later that afternoon.

I had an amazing conversation this morning with … Anonymous.

Anonymous is a true patriot.

We’ll all be hearing a lot more from this person very, very soon.https://t.co/M8CgEc8hAT