Much of the media has been reluctant to use terminology that would indicate rioting rather than protests with heightened tension, despite what has appeared to unfold in Philadelphia. (RELATED: More Than 30 Arrested After Riots Erupt In Philadelphia Following Alleged Police Shooting Of Man With Knife)

At least one police vehicle was set on fire and destroyed and more than 30 people were arrested for charges including looting, rioting and assaulting officers. Police in Philadelphia said that 30 officers were injured during the riots, dozens were hit with rocks and other projectiles, and a 56-year-old female officer was hit by a pickup truck and hospitalized, USA Today reported. Steve Keeley of Fox29 reported that 11 people were shot while looting, and “looters were shooting looters.”

11 people shot while looting in Philadelphia so far since last night. “Looters were shooting looters.” “50 yr old man that had his car filled then was carjacked and had all his stolem stiff re-stolen from him”from @PhillyPolice on scene of looting tell FOX 29. @FOX29philly pic.twitter.com/FahA709kFN

A police SUV is on fire at 52nd and market, surrounded by a crowd of a couple hundred pic.twitter.com/dwSFbNoMgs

CBS News referred to the hospitalizations of police officers who were “hit by projectiles, including rocks and bricks” and “protesters” surrounding the Philadelphia police precinct Monday as “violent protests” in a headline.

The Philadelphia Inquirer said that “tensions flared between officers and demonstrators” while “scattered looting broke out.” “Police and demonstrators skirmished . . . and officers used pepper spray and batons, making numerous arrests. Some of the demonstrators hurled debris at police, and one officer was struck by a water bottle.” The publication mentions that the evening had begun peacefully, but then “300 people marched to the police station,” which is where they were met by police with “riot shields.” 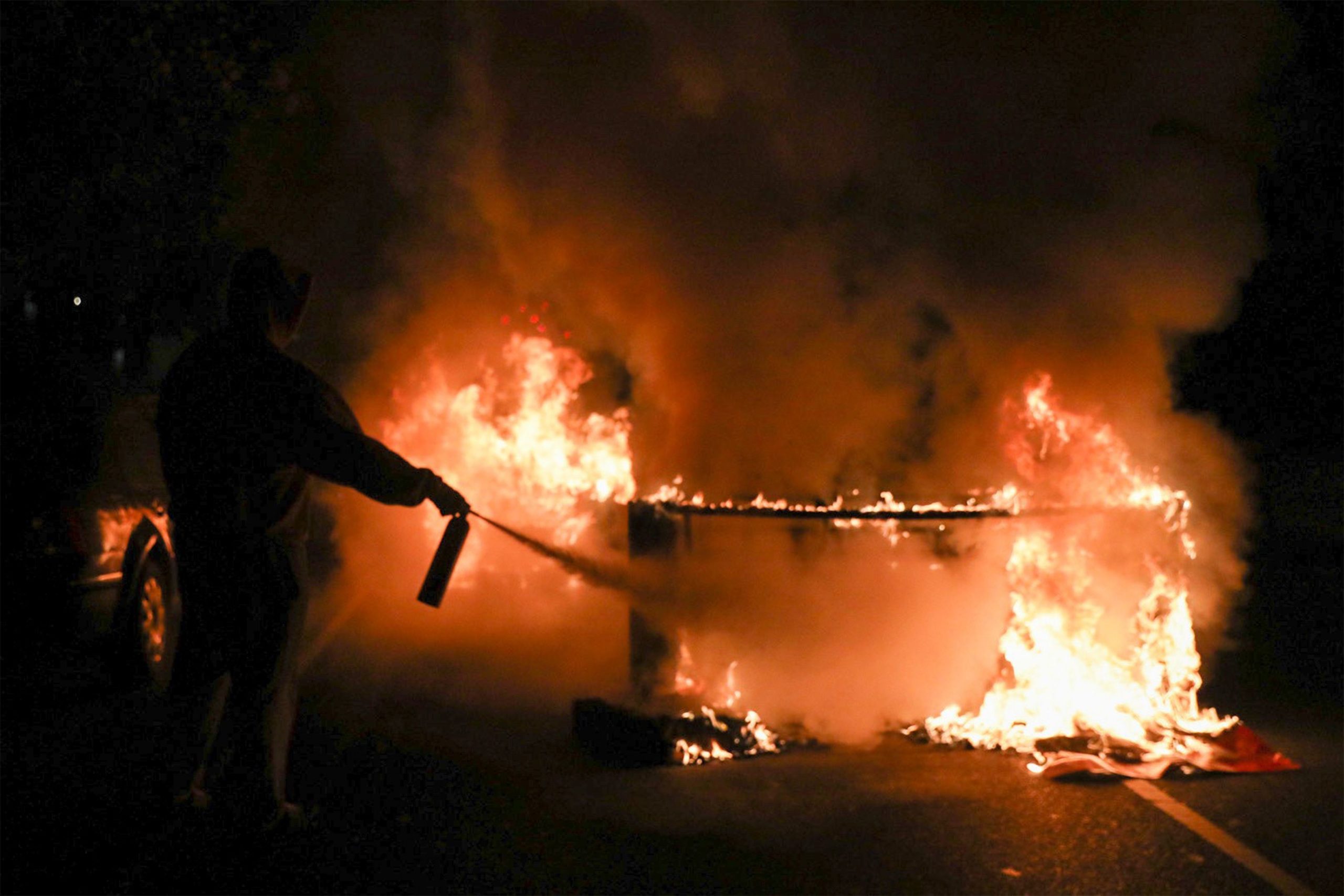 A person uses a fire extinguisher to put out a burning barricade in Philadelphia on October 27, 2020, during a protest over the police shooting of 27-year-old Black man Walter Wallace. (Photo by GABRIELLA AUDI/AFP via Getty Images)

The Associated Press wrote in the passive voice when referring to 30 officers who were struck with projectiles and injured, not mentioning the individuals who threw the objects. “Thirty officers were injured, most of them from being struck by projectiles such as bricks and rocks, according to preliminary information from police.”  The AP refers to an “interaction between protesters and police turning violent at times,” based on the Philadelphia Inquirer report.

The Washington Post says that Democratic Pennsylvania Gov. Tom Wolf authorized the state’s National Guard after a “smaller protest that turned destructive” Monday. The first day of “demonstrations and looting left shops damaged and at least 30 officers injured,” the article says. The Post also describes “a large protest” in New York City, based on a New York Daily News report, where “people shattered windows at several stores, lit fires and sprayed graffiti on a police van.”

“The protests near 52nd Street were broken up by police, who detained and arrested dozens as they marched toward angry crowds.” The Post says that police repelled “rocks, bricks, kicks and shoves” with their riot gear, but does not specify what group of individuals was throwing these objects.

CNN said that one group of protesters “peacefully marched” but the protest “turned violent” near the police precinct where “several people in the crowd threw rocks, light bulbs, or bricks at the police.” CNN refers to “violent protests” and “unrest.”

NBC described a “second night of protests” that saw “some looting” despite Wallace’s family’s pleas for an end to “any violence or looting.”

“Other demonstrations Tuesday were described as peaceful, including one that drew as many as 500 people.” The article cites an Inquirer story that reported a “mostly peaceful march.” 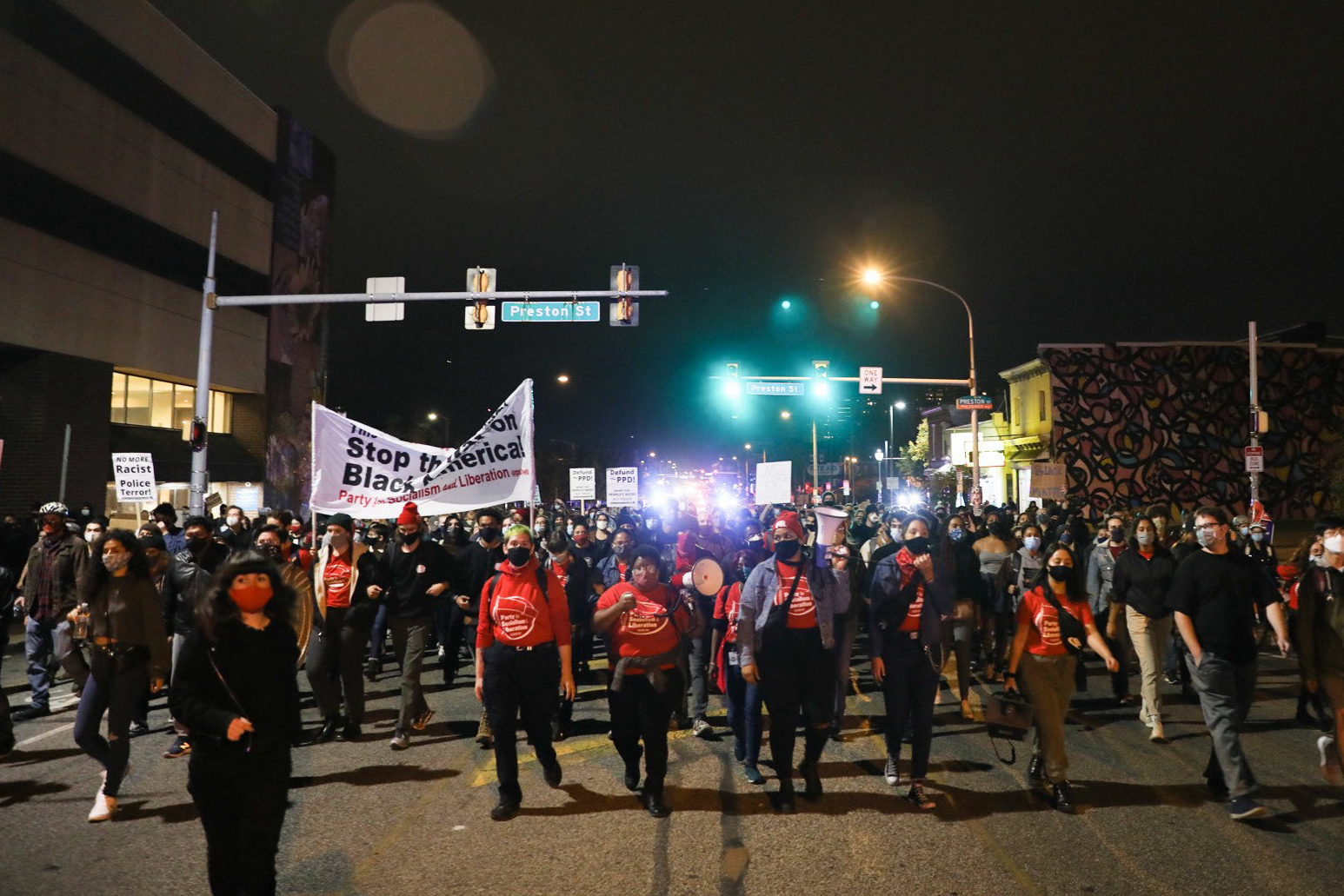 People hold banners and signs during a demonstration in Philadelphia on October 27, 2020, over the police shooting of 27-year-old Black man Walter Wallace. (Photo by GABRIELLA AUDI/AFP via Getty Images)

ABC was one of few mainstream outlets to use the word “riot” in reference to the escalation of violence in Philadelphia. “The confrontation that cost 27-year-old Walter Wallace Jr. his life Monday afternoon set off protests that devolved into rioting, looting and led to 30 cops being injured and 91 people being arrested, officials said.”

Philly Voice described the individuals who threw rocks and projectiles at police and set police vehicles on fire as “protesters.”

New York Times investigative reporter Eric Lipton accused “conservative voices” of trying to “amplify/draw attention to looting” in Philadelphia, in reference to a Daily Caller article reporting the “mass rioting and looting” in the city after the police shooting.

Watching my Twitter feed since last night very notable the intensity of tweets from conservative voices looking to amplify/draw attention to looting in Phila. Yes it happened. NYT covered it as well. Just remarkable how conservatives want to elevate it. https://t.co/cff3J8xoPs