The accepted wisdom, of course, is that handguns in 9mm or other pistol calibers are a short-range weapon, and of course there’s good reason for that, but what’s the maximum effective range?

How far can 9mm actually be effective?

Bear in mind of course that pistol calibers are weak as all get-out. Even 5.56mm NATO makes 9mm and .45 ACP look like pipsqueaks (they are) and 5.56mm NATO is literally a varmint cartridge. Sure, we use it on people, but it was invented to shoot prairie dogs and such.

The effective range of 5.56mm depends a lot on both muzzle velocity (AR pistols intensify) and the projectile used (just the green tip, just for a minute) but is thought to be anywhere from 200 to 600 yards, depending on whom you ask.

So how far can you actually stretch 9mm before it doesn’t do anything? According to GunTubers, it’s a lot farther than seems practical; Flannel Daddy (Garand Thumb) and some others have stated it’s a bit further than seems likely for a handgun.

Farther than you might think going by the numbers, but how much good it does you in the real world is something else. Remember also that placement trumps everything else. So long as the bullet pierces the flesh, what the bullet hits has more to do with efficacy than how hard it hits.

Here’s what that means.

We’ll start with the numbers.

Effective range can be defined as the range at which the projectile no longer retains enough energy to penetrate a fleshy target and do vital damage. What is that minimum energy, expressed in foot-pounds, at which a bullet is no longer going to be effective?

The oft-repeated old saw is a 100 ft-lbs minimum to penetrate tissue, though it should also be said that less-powerful handgun calibers with muzzle energy of around 200 ft-lbs are known for being less than reliably effective.

.380 ACP, for instance, is known to be less than perfectly effective and typical loadings have about 180 to 200 ft-lbs of muzzle energy. .38 Long Colt, the US Army’s handgun loading in the 1890s, was known for failures in the US-Phillipine war, and has a similar energy level.

The typical 9mm loading is a 115-grain projectile at somewhere around 1150 fps and about 340 ft-lbs of energy, which is often bandied as the minimum to be reliably effective.

Now, it’s known that 9mm is effective to distances beyond 50 yards though perhaps not beyond 100 yards.

Police shootings at 50 yards and beyond with 9mm pistols have put suspects down, including the Fairchild AFB shooting incident where an active shooter was stopped by four shots from a 9mm pistol at a distance of about 75 to 80 yards.

Therefore, let’s presume that 200 ft-lbs is something like the minimum effective energy level required to put down a game animal or a man.

Now, how far does 9mm travel before it drops to that energy level? 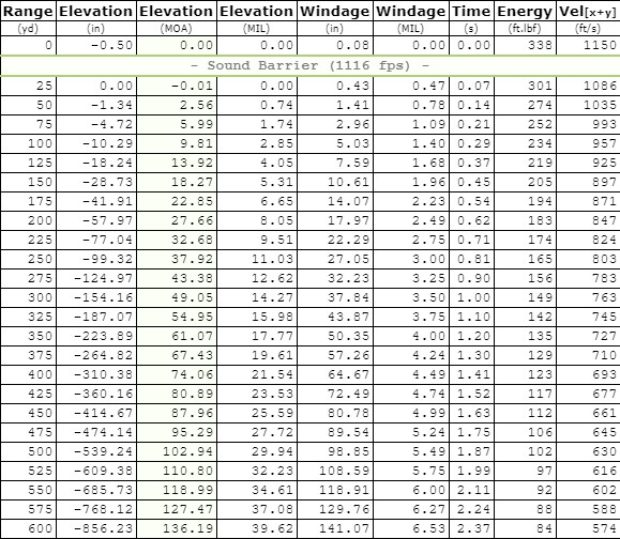 For typical ammunition, about 150 yards per data from the ballistic calculator on ShootersCalculator.

The above trajectory and ballistic table is calculated using a G1 ballistic coefficient of 0.130 (typical for 115-gr 9mm projectiles, both round nose and JHP) a muzzle velocity of 1150 fps and sight height of 0.5 inches, which is roughly the height over bore for most handgun sights.

Exact? Perhaps not the most exact, but close enough to make no difference.

Granted, if you feel as though 200 ft-lbs is too high a floor and that 100 ft-lbs is more like it, the range extends to about 500 yards. However, that seems a bit unrealistic.

Is there a way to extend it? Yes; you use a bullet of higher ballistic coefficient (which resists wind better) and/or of higher velocity. 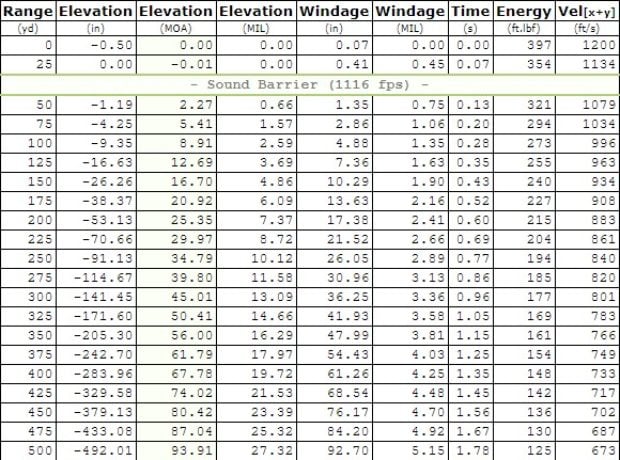 Of course, the highest BC’s for any caliber are found in heavy-for-caliber projectiles, which for 9mm is the 147-gr loadings. Typical 147-gr 9mm loads have a G1 BC around 0.21, and velocity around 1000 fps. The trajectory table changes thusly: 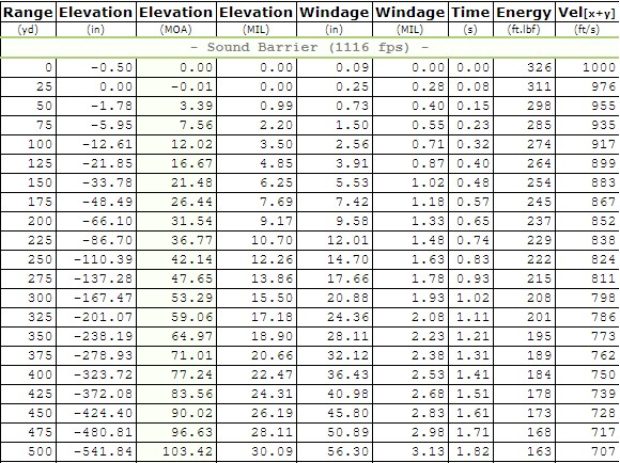 In this case, the 200 ft-lb threshold occurs at 325 yards, which actually seems quite impressive for such a wee little cartridge.

Granted, this comes with some caveats.

First is how accurate that 200 ft-lb minimum is. Even at point-blank range, cartridges with about 200 ft-lbs of energy (such as .380 ACP and .38 Long Colt) are, again, known for not being reliably effective.

Second is the feat of accuracy that has to be performed in order to place a shot with a 9mm pistol at those distances.

And making that kind of shot with fixed iron sights with the short sight radius of handguns – that’s not easy. Sure, you could say something something Jerry Miculek, but you aren’t Jerry Miculek.

Unless of course he’s reading this but that’s not very likely!

Or you could say something something Elmer Keith, “but if you remember the story of the 600-yard shot, he walked that .44 Magnum slug onto the buck; it wasn’t the first shot that struck.”

So, what’s the maximum effective range of 9mm? It depends on how you define that, as well as the loading, which – of course, is the same for any caliber be it chambered in a handgun or a rifle.

With that said, however, you can comfortably say that it’s conservatively around 100 yards, but perhaps much longer than that.

However, it also bears mentioning that ft-lbs of energy and feet per second of velocity have less to do with the efficacy of a bullet than placement does. Put a bullet where it needs to go, and even a weak, tiny bullet can do vital damage.

So you can say that 9mm, in all likelihood, is effective far past the distance most people can accurately shoot it out to.

Click here to get The Complete Concealed Carry Training Guide

Sam Hoober is a Contributing Editor to AlienGearHolsters.com, a subsidiary of Hayden, ID, based Tedder Industries, where he writes about gun accessories, gun safety, open and concealed carry tips. Click here to visit aliengearholsters.com.