A New Jersey gym owner who repeatedly defied coronavirus lockdowns and was fined roughly $1.2 million told the Daily Caller News Foundation that he doesn’t plan to pay a cent.

Ian Smith, co-owner of Atilis Gym, has incurred roughly 60 citations and is charged nearly $15,500 per day that he remains open in defiance of Democratic New Jersey Gov. Phil Murphy’s COVID-19 closures, he told Fox News. Smith alongside Frank Trumbetti, another owner of the fitness facility, were arrested in late July after the pair refused to close their business following a weeks-long fight with state, The Philadelphia Inquirer reported.

“We aren’t going to be paying them,” Smith told the DCNF in an email regarding the accumulation of fines.

“Leave us alone,” the gym owner continued in a message to Murphy. “We have proved you wrong. Our business has been running for 7 months with better safety protocol than the entities you are responsible for running.”

“Long term care facilities have the highest death rate and it’s still rampaging through the facilities even though they have been locked down. Our protocol has kept people safe, yours hasn’t.”

Nursing home deaths in New Jersey doubled from nearly 3,250 in May to 7,135 in September as COVID-19 cases surged, according to Patch. Menlo Park Veterans’ Memorial Home, a long-term care facility in the state lost roughly half of its 300-patient population to the disease, a late October Guardian investigation found. 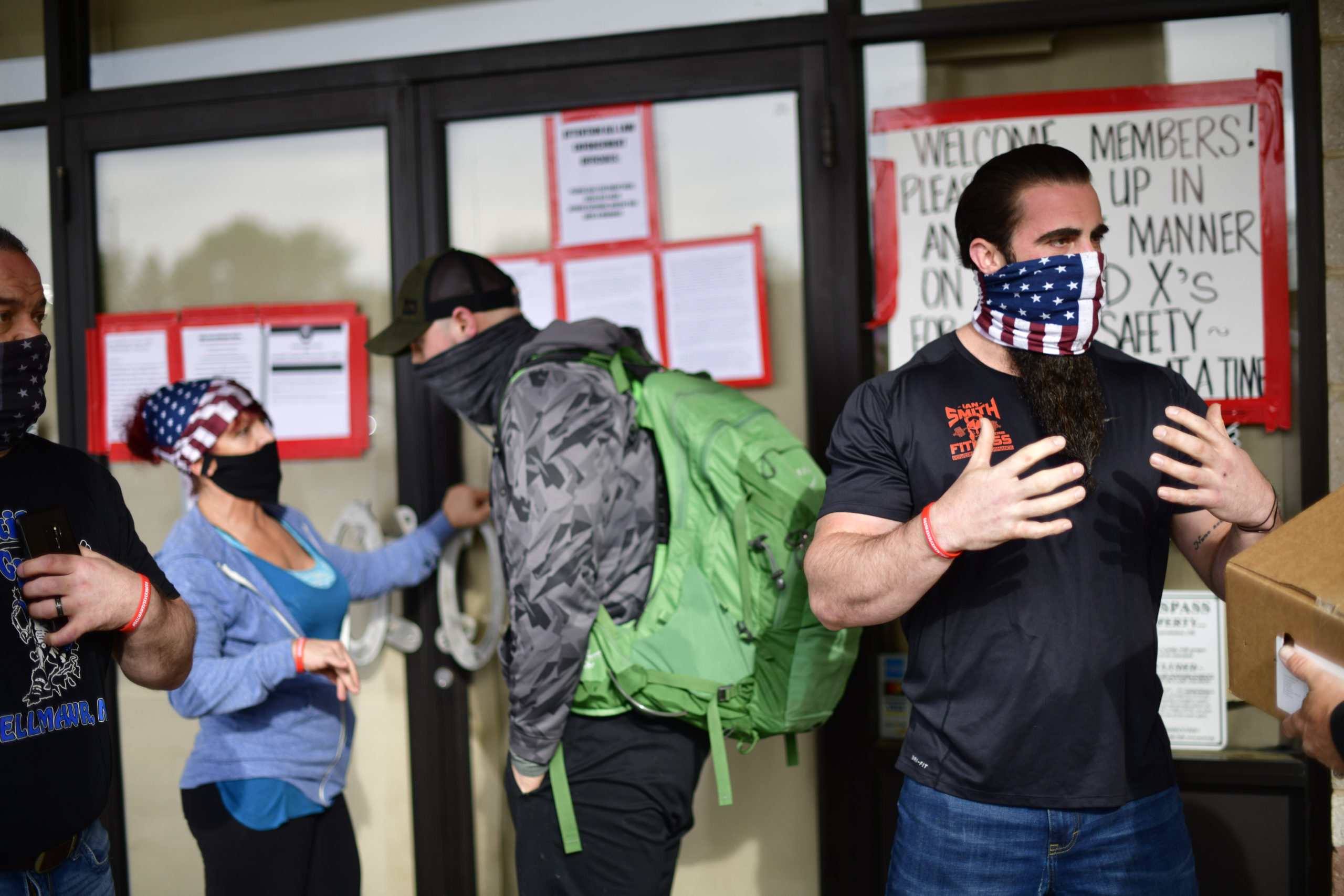 Employees confer with patrons lining up outside the Atilis Gym on May 20, 2020 in Bellmawr, New Jersey. (Mark Makela/Getty Images)

In November, authorities mandated returning nursing home residents quarantine for two-weeks if they visit with family, according to NJ.com. It is unclear if the spread has worsened since the mandated lockdown.

“What’s happening to the middle class and small businesses in America is nothing short of a complete tragedy,” he told Fox. “I would go so far as to call it criminal. You are putting people out of business for good.

“You are making them reliant on big government. You are taking away their civil liberties under the guise of pretending like you care about public health.”

Smith appeared in a video that was posted by TMZ on Sunday where he held up flashcards reading, “Gov. Murphy will see this video and fine us $15k for it. But … free men don’t ask permission. Or for forgiveness.”

A man can be heard yelling “Fuck you, Murphy!” in the footage. (RELATED: New Jersey Gym Owners Arrested After Defying COVID Order)