On Saturday, the U.K. informed the World Health Organization that the mutant strain of coronavirus could spread more quickly than previous strains, chief medical officer for England Professor Chris Whitty said in a statement. British government leaders including Prime Minister Boris Johnson also met on an emergency basis over the weekend to establish the country’s response, according to NBC News.

Since Whitty’s announcement, more than 40 countries including India, Canada, Germany and France have announced rules restricting travel from the U.K.

The U.S. has not joined the growing list of countries to introduce such rules as of Tuesday evening. 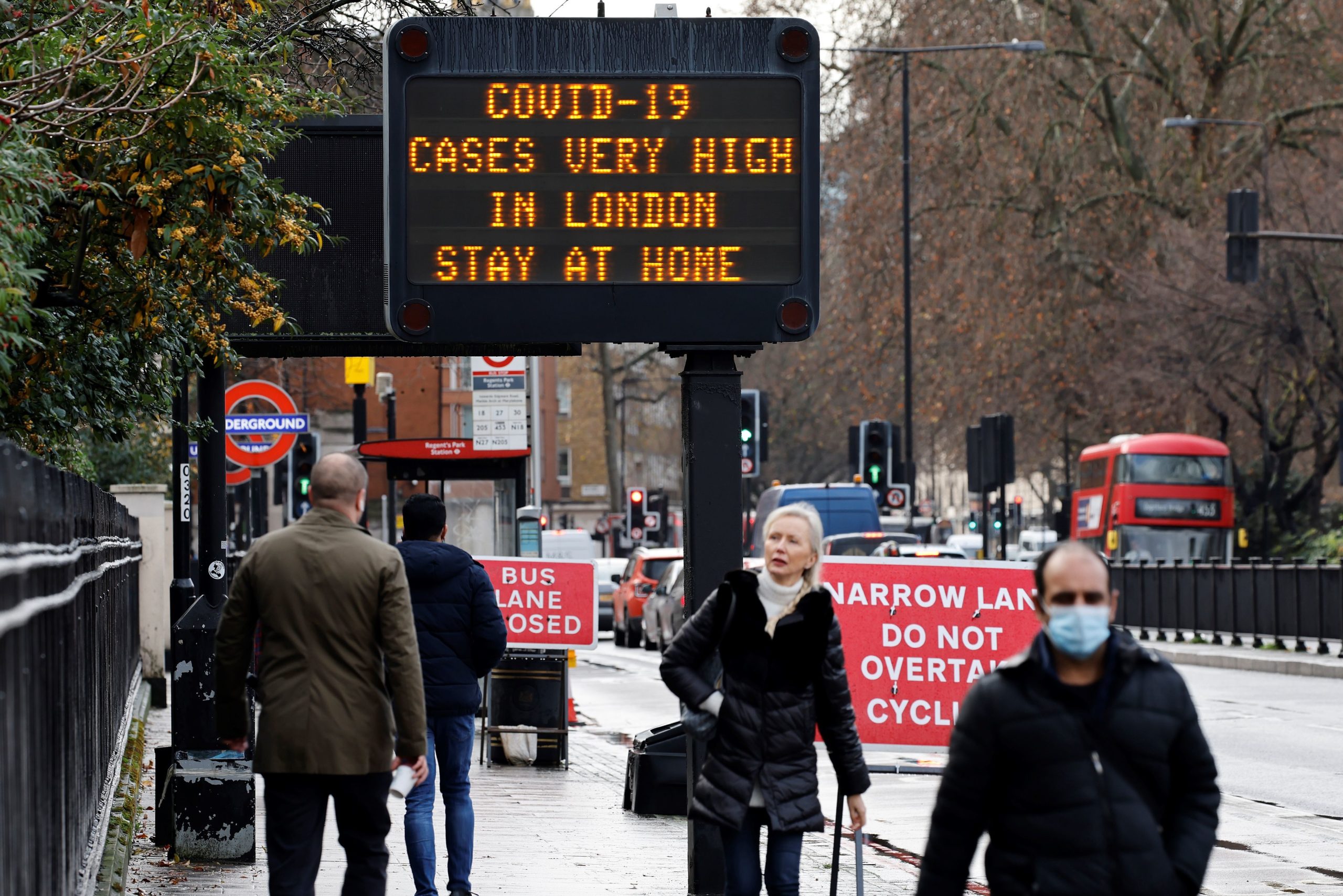 Pedestrians, some wearing a face mask or covering due to the COVID-19 pandemic, walk past a sign alerting people that “COVID-19 cases are very high in London – Stay at Home”, in central London on December 23, 2020. – Britain’s public health service urged Prime Minister Boris Johnson on Wednesday to extend the country’s Brexit transition period or risk pushing hospitals already struggling with coronavirus “over the edge” in the event of a no-deal departure from the EU single market. (Photo by Tolga Akmen / AFP) (Photo by TOLGA AKMEN/AFP via Getty Images)

How contagious is it?

“We now have high confidence that this variant does have a transmission advantage over other virus variants that are currently in the U.K.,” Peter Horby, professor of emerging infectious diseases at the University Oxford, said at a Tuesday press conference, CNN reported.

Some experts have speculated that the new strain could be more contagious because it affects children more than past variants.

“Normally, children are less likely than teenagers or adults to get infected or pass on the virus. But the new variant may make children ‘as equally susceptible as adults,'” said Wendy Barclay, a government adviser and virologist at Imperial College London, according to The New York Times. 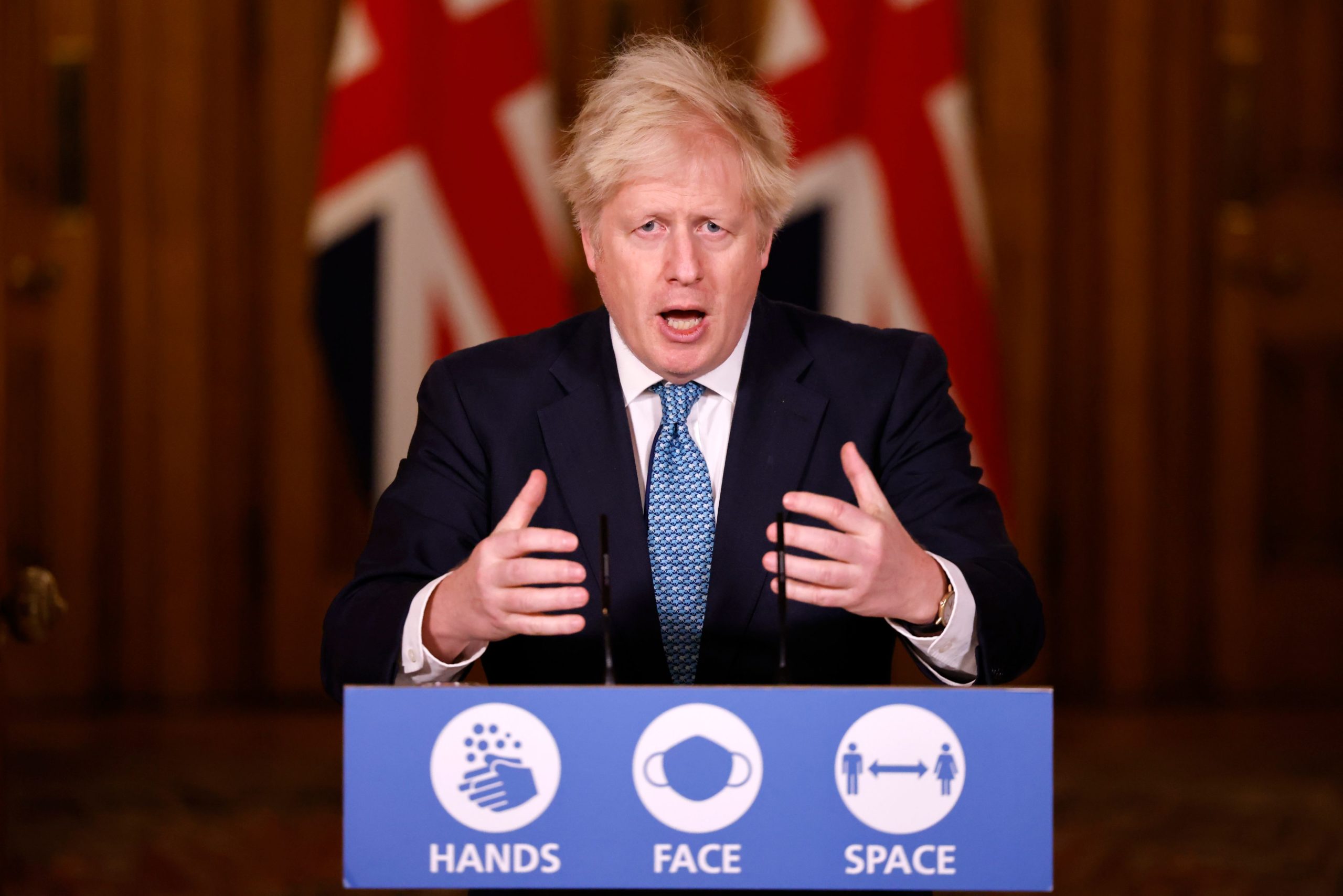 How deadly is it?

There hasn’t been evidence that the new strain is more severe, The Times reported. However, in South Africa, where it is currently spreading rapidly, there is some evidence of the virus causing higher viral load.

“There is no current evidence to suggest the new strain causes a higher mortality rate or that it affects vaccines and treatments although urgent work is underway to confirm this,” Whitty said on Saturday.

At the genetic level, there isn’t any significant “epidemiological or clinical differences,” the Centers for Disease Control and Prevention (CDC) said in a report Tuesday.

Where did it originate from?

While it remains unknown where the strain originated, it likely came from a set of hosts where the virus was able to mutate, according to The Times. Individuals with weak immune systems who are infected with coronavirus might have been hosts where the new strain formed.

For most people, coronavirus enters their body until their immune system is able to develop the antibodies to destroy it within a few weeks at most, The Times reported. But, the virus can linger for months in someone who is immunocompromised.

When it lingers, the virus can mutate multiple times in the immunocompromised body, according to The Times.

Animals are another potential set of hosts that the new strain could have come from, according to The Times. The virus could mutate in an animal species, like mink, before being given back to humans. 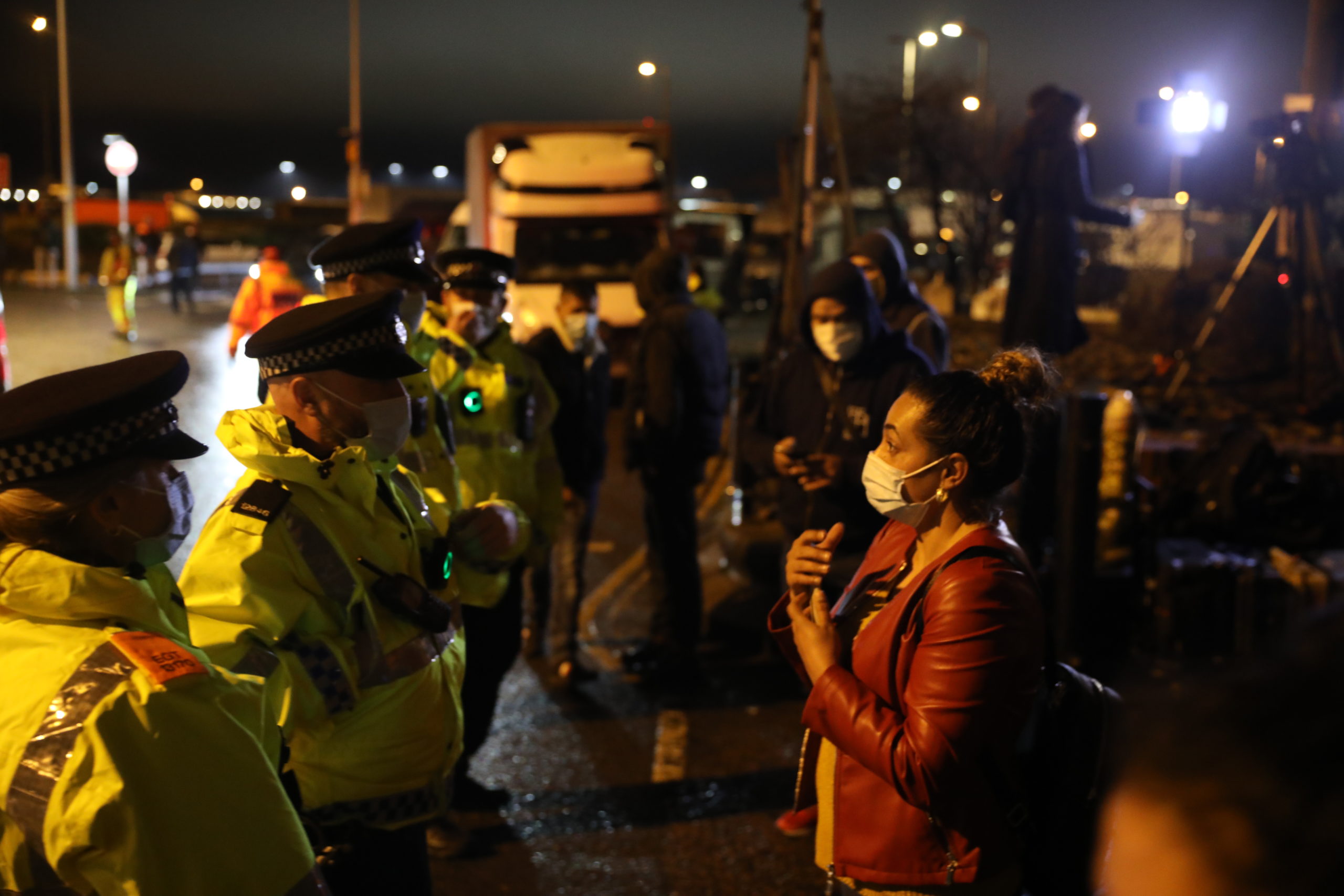 Police officers speak to drivers who seek to travel to France at the Port of Dover on Wednesday in Dover, United Kingdom. (Dan Kitwood/Getty Images)

Has the U.K. contained it?

Although nations around the world have attempted to combat the new strain through travel restrictions and the U.K. has implemented strict restrictions of its own, the strain is likely not contained, according to top U.S. infectious disease experts.

“When you see something that is pretty prevalent in a place like the U.K. — there are also mutations that we’re seeing in South Africa — and given the travel throughout the world, I would not be surprised if it is already here,” National Institute of Allergy and Infectious Diseases Director Dr. Anthony Fauci said Monday. “When we start to look for it, we’re going to find it.”

“Certainly, it is not yet the prevalent one, the way it seems to have assumed that prevalent nature in the UK. But we’re going to be looking for it right now, and I’m sure, sooner or later, we’re going to run into it and find it,” Fauci said.

In addition, some researchers said hundreds of people in the U.S. have probably been infected with the new strain, CNN reported.

The strains in South Africa are unrelated to the new strain in the U.K., according to the CDC. (RELATED: New UK COVID-19 Strain Likely In The US, Says Fauci)

For the UK variant:
Outside of the UK, we see very small numbers of sequences in Denmark (a bit hard to see – hidden behind UK circle) & Australia. Their position on the tree indicates that they’re likely exports from the UK.

Will already approved vaccines work against the strain?

The vaccines made by pharmaceutical companies Pfizer and Moderna will be effective against the new strain, which is “very similar” to previous strains at the genetic level, University of Washington’s Institute for Health Metrics and Evaluation affiliate assistant professor Vin Gupta told CNBC Monday. Virus mutations are sometimes able to render vaccines ineffective, but experts say that is likely not the case for this new strain.

“There is a strong belief here that the vaccine, as it exists today … will have effectiveness in warding off infection from this new strain in England, in addition to the old strain that we’ve been contending with for months now,” Gupta said, according to CNBC.

Dr. Moncef Slaoui, who is leading the U.S. vaccine effort, agreed the vaccines would be able to combat the new strain, according to The Times.