New Yorkers are increasingly turning to social media campaigns to pan Governor Andrew Cuomo’s ban on indoor dining and COVID-19 response in general. They also hope to promote bars and restaurants that have been affected by the shutdown.

New York shut down all non-essential businesses on March 16, and restaurants were only allowed to re-open for outside service in June. Restaurants could serve patrons indoors starting in September, but were forced back outside on Dec. 14.

These rapid changes have been devastating for restaurateurs, most of whom struggled with slim profit margins before the pandemic. As a result, more than 1,000 New York City restaurants have permanently closed since the start of the COVID-19 shutdowns. (RELATED: New York City May Lose Half Of All Bars, Restaurants, Audit Shows)

In an effort to help fellow business owners, Feltman’s Hot Dogs of Coney Island owner Michael Quinn created the NYC Restaurants Open Facebook page. Quinn, a lifelong New Yorker, told the Daily Caller, “I’m trying to do what I can via social media, Instagram, Facebook, even TikTok to best support our businesses… We have given out thousands of free hot dogs to essential workers and raised thousands for charitable causes.”

It’s the equivalent of the Yankees donating $3 million.

We’re hoping to inspire other bigger businesses to do the same. #Viva #BarstoolFund #BeatNavy pic.twitter.com/vZqb8NPXaZ

Quinn considers himself lucky. His business is contingent on neither New York City foot traffic nor local government edicts. Michael and his brother and co-owner Joe reached distribution agreements with more than 5,000 supermarkets nationwide to sell Feltman’s hot dogs shortly before the city’s lockdowns started, he said.

Megan Rickerson, owner of the Someday Bar in Brooklyn, was not as lucky. She was forced to furlough her entire staff at the beginning of the pandemic. When Paycheck Protection Program (PPP) funding came in from the Small Business Administration, she paid her staff to stay home, Rickerson told the Daily Caller. New York City did not allow restaurants and bars to re-open in time for Rickerson to use the PPP money to run the Someday Bar. She did not want the money to turn into a loan, which it would have if she did not spend it in a timely fashion. 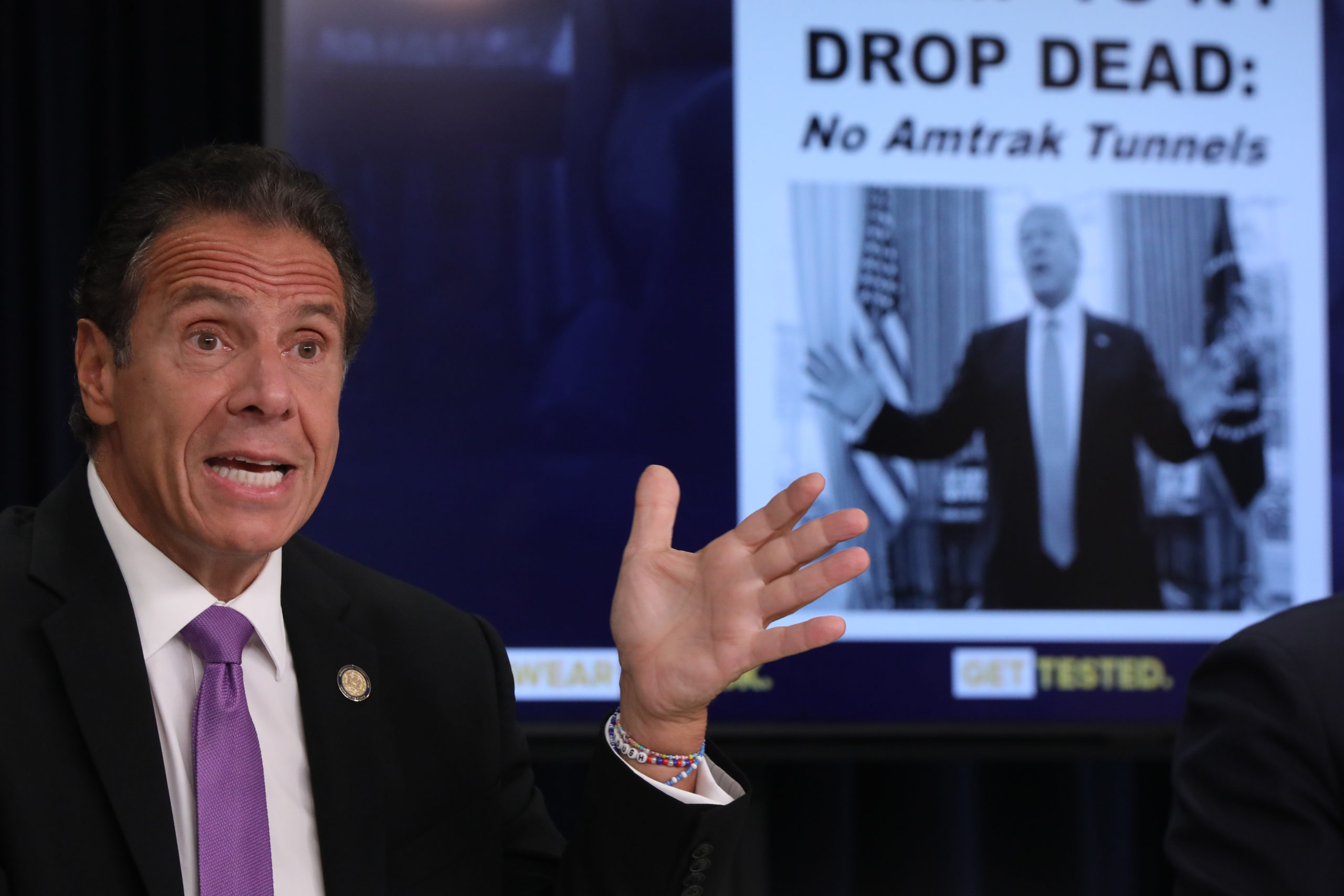 NEW YORK, NEW YORK – SEPTEMBER 08: Gov. Andrew Cuomo criticizes Trump’s handling of COVID-19 at a news conference on September 08, 2020 in New York City. Cuomo banned indoor dining at restaurants in New York City on Dec. 14 despite the fact that data released by his office suggests that restaurants are not significant spreaders of COVID-19. (Photo by Spencer Platt/Getty Images)

The Someday Bar was recently featured on the Instagram page Good Morning Cuomo. The page’s creator, Hayley Karl, described it to the Daily Caller as “a platform for bars/restaurants to voice their struggles to an audience of one: Governor Andrew Cuomo.”

Rickerson expressed frustration with Cuomo’s public health messaging despite broadly agreeing that a full reopening is not feasible. “He says, ‘follow the science,’ but the science says it’s not us,” Rickerson said. She pointed to contact tracing data released by the Office of the Governor which states that restaurants and bars have led to only 1.4% of all COVID-19 cases in New York.

The inconsistencies also possibly caused workers to stay home instead of returning to their jobs. The Federal Reserve estimated that only 190,000 New York City hospitality employees were employed in November, down from 320,000 in February. While many employees lost their jobs when their restaurants and bars closed, others accessed unemployment benefits during the spring’s temporary closures.

Rickerson said that she and owners of other restaurants have employees that would rather stay home and continuously collect unemployment benefits. Those employees are concerned that they will lose their jobs again due to the inconsistent opening plans, and in some cases may make more money from unemployment than they would working per hour and for tips.

Despite a dearth of employees, restaurants must collect and maintain contact tracing information from diners that can be collected by the city at any time. Through a combination of increased responsibility and decreased revenue, “the City of New York has destroyed small businesses,” Playwright Irish Pub owner John Doherty alleges. Doherty employed 25 workers before the pandemic, but is now down to just four.

Doherty, who immigrated to Brooklyn from Ireland in the early 1990s, contrasts New York’s expectations of the food industry with those of retail establishments. From the Playwright’s location on 35th Street, he can see customers streaming in and out of the Macy’s Herald Square location, he said. Malls and department stores were not required by Governor Andrew Cuomo to close in his latest shutdown order, and they also do not have to collect contact tracing information. (RELATED: Restaurant Owners File Lawsuit Against Cuomo, De Blasio Over Shutdowns)

“It’s ridiculous. Cuomo on his high horse is a fool,” Doherty said of the discrepancy in treatment. “Let’s keep Amazon going, crush the small businesses.” Landlords, vendors, and restaurant owners have all been thrown together and have no choice but to support each other, he added.

Doherty estimates that he has been forced to spend about $12,000 on space heaters and other construction materials in building an outdoor structure that can accommodate customers.

Commuting from northern New Jersey, Doherty sees restaurants near his home also struggling. However, Governor Phil Murphy has elected to keep that state’s restaurants open at 25% capacity. “Do we see substantial indoor spread related to [dining indoors]? And the answer is, we don’t,” Murphy told northjersey.com.