The pro-Trump rioter pictured kicking his feet up in House Speaker Nancy Pelosi’s office on Wednesday said he was just trying to find a bathroom inside the Capitol.

“I didn’t do anything. I didn’t breach the doors. I got shoved in. I didn’t mean to be there. Hell. I was walking around looking for a bathroom,” the man, Richard Barnett of Gravette Arkansas, told 5News, an Arkansas-based CBS affiliate.

Barnett said he was initially pushed into the Capitol building by the mob, which he said was roughed up and tear-gassed by Capitol police officers.

“They went to the front door, and they started demanding to be let inside. I wasn’t even up there at that point. I was climbing the steps to see what was going on. When I got to the top, they had breached the doors and were trying to get in,” Barnett said.

Barnett said he found his way to Pelosi’s office after entering the building.

“I threw my feet up on the desk at that point. I realized some assholes had cut me also and I bled on her envelope, so I picked up the envelope and put it in my pocket, and I put a quarter on the desk cause I’m not a thief,” he told 5News.

Barnett said he also left a note on Pelosi’s desk that read: “Nancy, Bigo was here, you Bitch.” Bigo is a reference to his nickname, according to 5News. 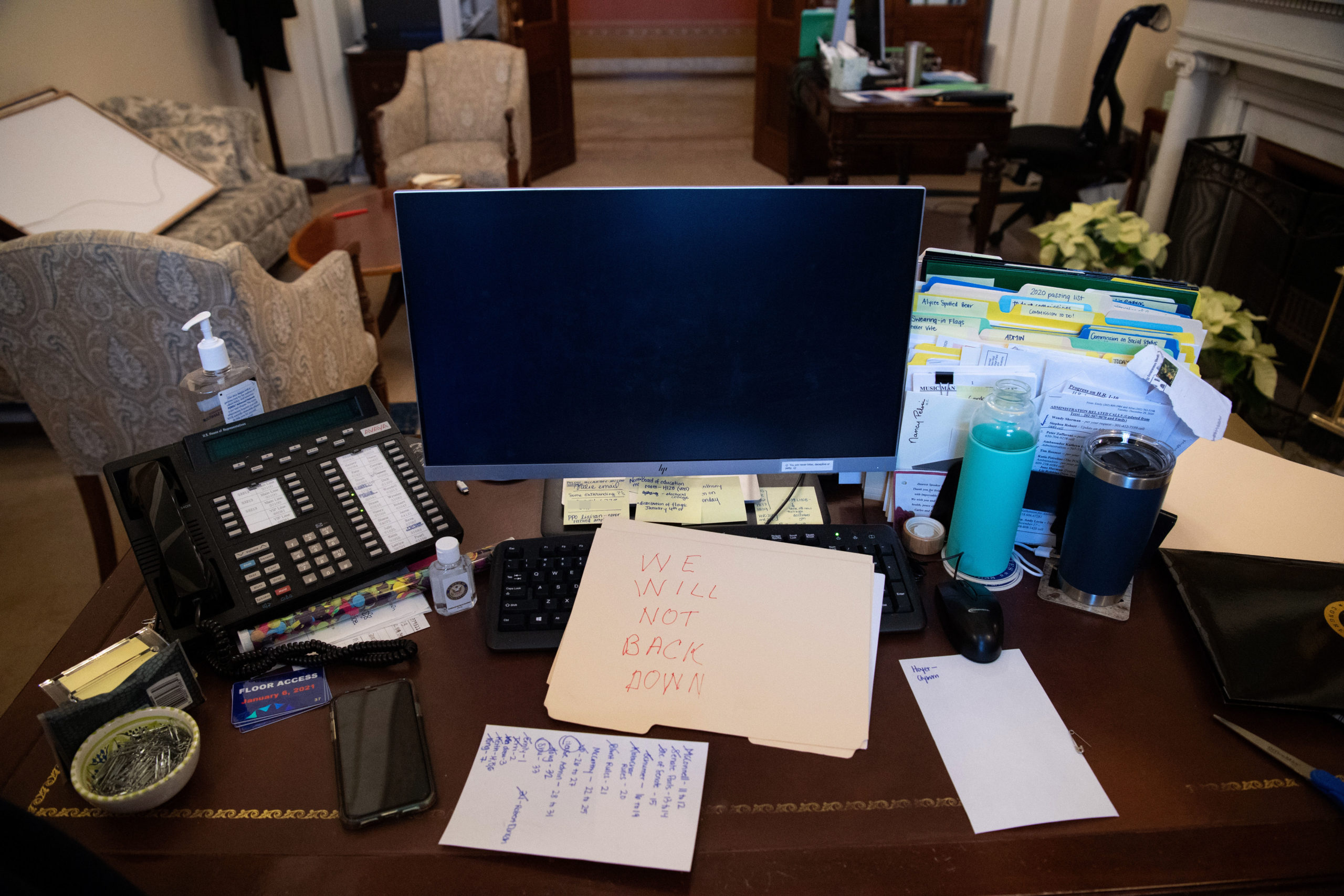 A supporter of US President Donald Trump leaves a note in the office of US Speaker of the House Nancy Pelosi as he protests inside the US Capitol in Washington, DC, January 6, 2021. (SAUL LOEB/AFP via Getty Images)

Barnett said he wasn’t scared that he could face federal charges for his involvement in the rioting Wednesday. (RELATED: FBI Seeking Tips To Identify Members Of Pro-Trump Mob Who Stormed Capitol)

A vocal supporter of President Donald Trump, Barnett identified himself as a “white nationalist” in a post Saturday on a pseudonymous Facebook page, according to The Washington Post.

“I am white. There is no denying that. I am a nationalist. I put my nation first. So that makes me a white nationalist,” Barnett wrote in the post, adding that people who aren’t nationalists should “get the fuck out of our nation.”

Barnett published a picture of himself to the Facebook page on Dec. 18 in a post stating: “I came into this world kicking and screaming, covered in someone else’s blood. I’m not afraid to go out the same way.”

New: Richard “Bigo” Barnett, the pro-Trump rioter pictured yesterday in Nancy Pelosi’s office, recently said on a pseudonymous FB account that he was a white nationalist and prepared for a violent death. https://t.co/RVW3159xNk pic.twitter.com/qAjrspkaEQ

All but one of the 62 lawsuits filed by Trump and his allies alleging voter fraud and irregularities in the 2020 election have failed in court, according to USA Today.

Barnett’s pseudonymous Facebook page was locked or removed from the site Thursday morning, according to The Post.