“These are the things and events that happen when a sacred landslide election victory is so unceremoniously & viciously stripped away from great patriots who have been badly & unfairly treated for so long,” Trump wrote in the now-deleted tweet. “Go home with love & in peace.”

“Remember this day forever!” he added.

All but one of the 62 lawsuits filed by Trump and his allies alleging voter fraud and irregularities in the 2020 election have failed in court, according to USA Today.

One person died after a mob of pro-Trump rioters stormed and occupied the Capitol building Wednesday as lawmakers were meeting to certify President-elect Joe Biden’s election victory. (REPORT: Woman Shot In Neck At Capitol Building Has Died)

Trump told supporters during a speech earlier in the day that he would lead a march to the capitol building to “cheer on our brave senators and congressmen and women” challenging his loss to Biden.

The Army activated the entire D.C. National Guard Wednesday afternoon to be deployed at the Capitol and other locations in the city, according to The New York Times. The FBI also sent a SWAT team into the Capitol building later in the afternoon to help quell the rioting.

This is the fbi swat team in the capitol. pic.twitter.com/bY6maxLjLJ

Other high ranking members of his administration, including Vice President Mike Pence, issued statements strongly condemning what was taking place at the Capitol building.

“The violence and destruction taking place at the US Capitol Must Stop and it Must Stop Now,” Pence tweeted. “Anyone involved must respect Law Enforcement officers and immediately leave the building.” 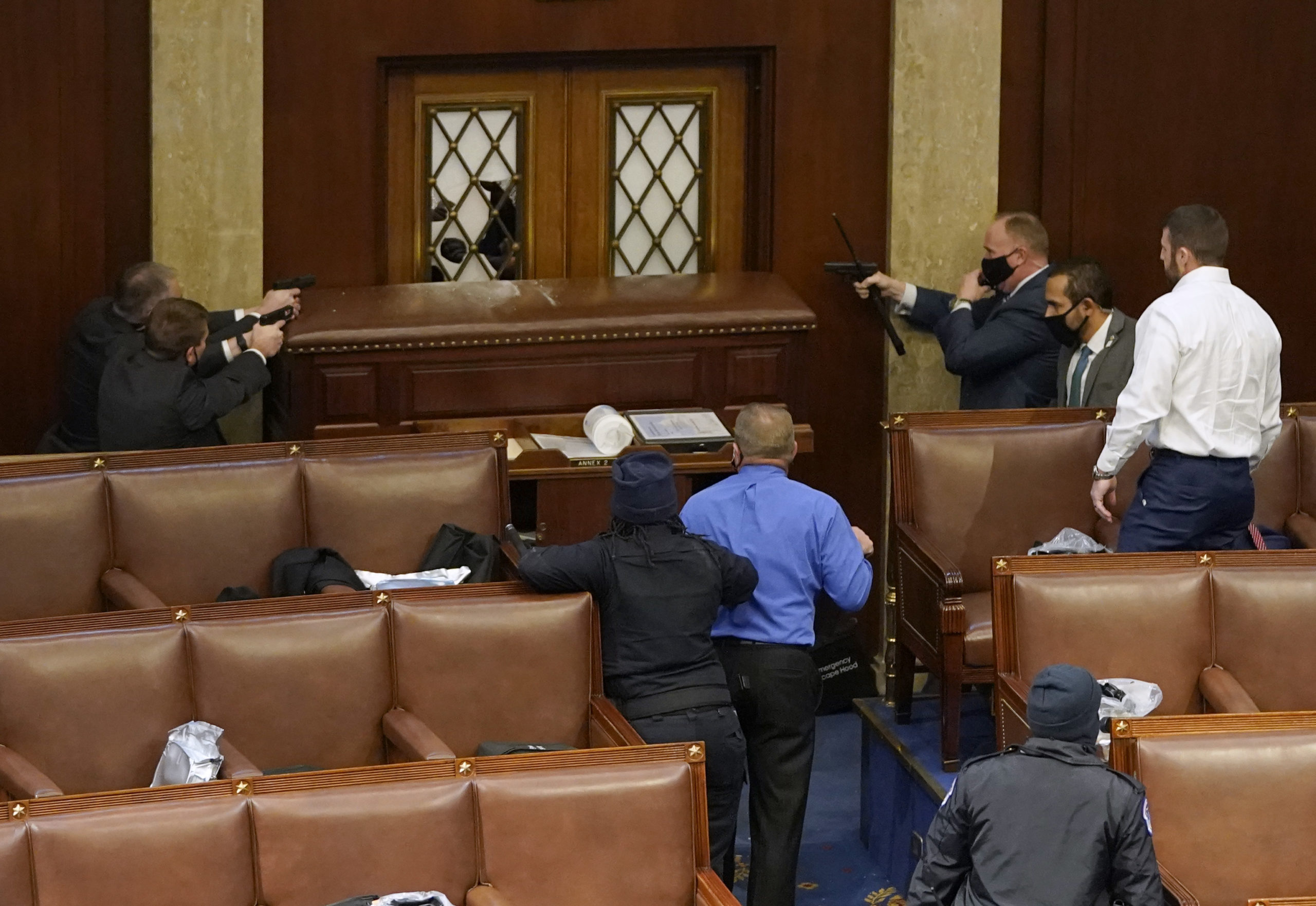 U.S. Capitol police officers point their guns at a door that was vandalized in the House Chamber during a joint session of Congress on January 06, 2021, in Washington, DC. (Drew Angerer/Getty Images)

Acting Homeland Security secretary Chad Wolf said Wednesday that violence “in any form is unacceptable” and that all “violent opportunists at the US Capitol grounds must be held accountable.”

And Robert O’Brien, Trump’s assistant for national security affairs, said “what the mob did to our Senate Chamber today was an utter disgrace.”

My first experience in government was serving as an intern for US Senator S.I. Hayakawa of California. What the mob did to our Senate Chamber today was an utter disgrace.

At least eight Democratic representatives said Wednesday that Trump should be impeached and removed from office. (RELATED: Rep. Ilhan Omar To Introduce Articles Of Impeachment Following Mob Violence At Capitol)