Civil rights activist Martin Luther King Jr. advocated for solutions to racial issues that do not wholly align with the agenda and past actions of the Black Lives Matter organization, though he shared some ideas about economic restructuring.

King Jr. encouraged peaceful protest rather than violence and rioting, methods that have been linked to the Black Lives Matter organization. He also expressed a partiality for democratic socialism and said he understood the deep emotions about racism that drive rioting in the United States.

“The strong man is the man who will not hit back, who can stand up for his rights and yet not hit back,” Martin Luther King Jr. said during a 1956 speech at Holt Street Baptist Church.

“If we as Negroes succumb to the temptation of using violence in our struggle, unborn generations will be the recipients of a long and bitter night of—a long and desolate night of bitterness,” King said. “And our only legacy to the future will be an endless reign of meaningless chaos.”

These statements are evocative of King’s rallying cry and legacy of non-violent activism as he called on Americans to stand up for equality and against racism. (RELATED: Here Are The Other, Unstated Agendas Of ‘Black Lives Matter’)

“Our use of passive resistance in Montgomery,” King told TIME Magazine, “is not based on resistance to get rights for ourselves, but to achieve friendship with the men who are denying us our rights, and change them through friendship and a bond of Christian understanding before God.”

Some movements that oppose racism today appear to embrace the possibility of violence in protest — particularly Black Lives Matter Global Network Foundation, Inc. (BLM). Not to be confused with the broader movement that espouses the “Black Lives Matter” slogan, the BLM organization embraces radical policies and has been linked repeatedly to rioting in the past year.

Founded in the aftermath of the 2013 Trayvon Martin shooting, BLM’s stated mission is to “eradicate white supremacy and build local power to intervene in violence inflicted on Black communities by the state and vigilantes.” The organization commemorated King in a Monday statement, promising to “persevere” as King did and “speak out and take action against injustice everywhere.”

“We’re fighting for our lives and liberation,” the statement said. “We’re mourning the Black lives lost to systemic racism, police brutality, and COVID-19. And we’re recovering from a white supremacist failed coup at our nation’s Capitol just 12 days ago — all while still trying to reckon with the racist roots of the country we are fighting so hard to improve.”

While King sought an end to segregation and racism, BLM not only prioritizes fighting “police brutality” but has also professed the ambition to increase abortion access, to expand LGBTQ equality, and up until about September 2020, to disrupt the Western family unit. The page on which BLM previously promised to disrupt the Western family unit was removed in September 2020.

“It is a political move,” journalist Jason Whitlock said on “Tucker Carlson Tonight” in July 2020 amidst BLM-led riots and protests. “It’s a communist political move. … I’ve seen many of these guys, they claim they’re in Christianity and their religious beliefs — do they understand Black Lives Matter, communism, Marxism, is anti-religious?”

The movement’s leaders also have multiple ties to communist ideology: BLM co-founder Patrisse Cullors told TIME in 2018 that Karl Marx, Vladimir Lenin, and Mao Zedong are among her intellectual influences who helped her gain a “new understanding around what our economies could look like.”  (RELATED: Black Lives Matter Co-Founder Alicia Garza In 2015: Capitalism Must Be Abolished For Black Lives To Matter)

“We actually do have an ideological frame,” she said, according to the New York Post.  “Myself and Alicia in particular, we’re trained organizers. We are trained Marxists. We are super-versed on ideological theories.”

BLM does not explicitly mention Marx on its website, but the organization does make mention of terms with Marxist influences, such as the word “comrade.”

Cullors also said in the Harvard Law Review that reparations are “justified by the historical pains and damage caused by European settler colonialism” and that abolition means “no borders” and “an end to U.S. wars at home and abroad.”

Comments made by King in his letters and speeches show that he believed democratic socialism was a possible avenue to ending racial disparities.

“I imagine you already know that I am much more socialistic in my economic theory than capitalistic,” he wrote in a 1952 love letter to his future wife, Coretta Scott. In the same letter, he described himself as ” radically opposed to communism,” writing that “Destructive means cannot bring about constructive ends.”

Later on in his career, King would advocate against capitalism and for a “better distribution of wealth.”

“You’re really tampering and getting on dangerous ground because you are messing with folk then,” he continued. “You are messing with captains of industry. Now this means that we are treading in difficult water, because it really means that we are saying that something is wrong with capitalism. There must be a better distribution of wealth, and maybe America must move toward a democratic socialism.”

The US Crisis Monitor, a Princeton University project, found that 91% of the 637 riots between May 26 and Sept. 12 were linked to Black Lives Matter groups.

The data also found that 7% of these Black Lives Matter-linked riots turned violent, defining riots as “demonstrations in which any demonstrators engage in violently disruptive or destructive acts (e.g. violence, looting, vandalism, etc.), as well as mob violence in which violent mobs target other individuals, property, businesses, or other groups.” 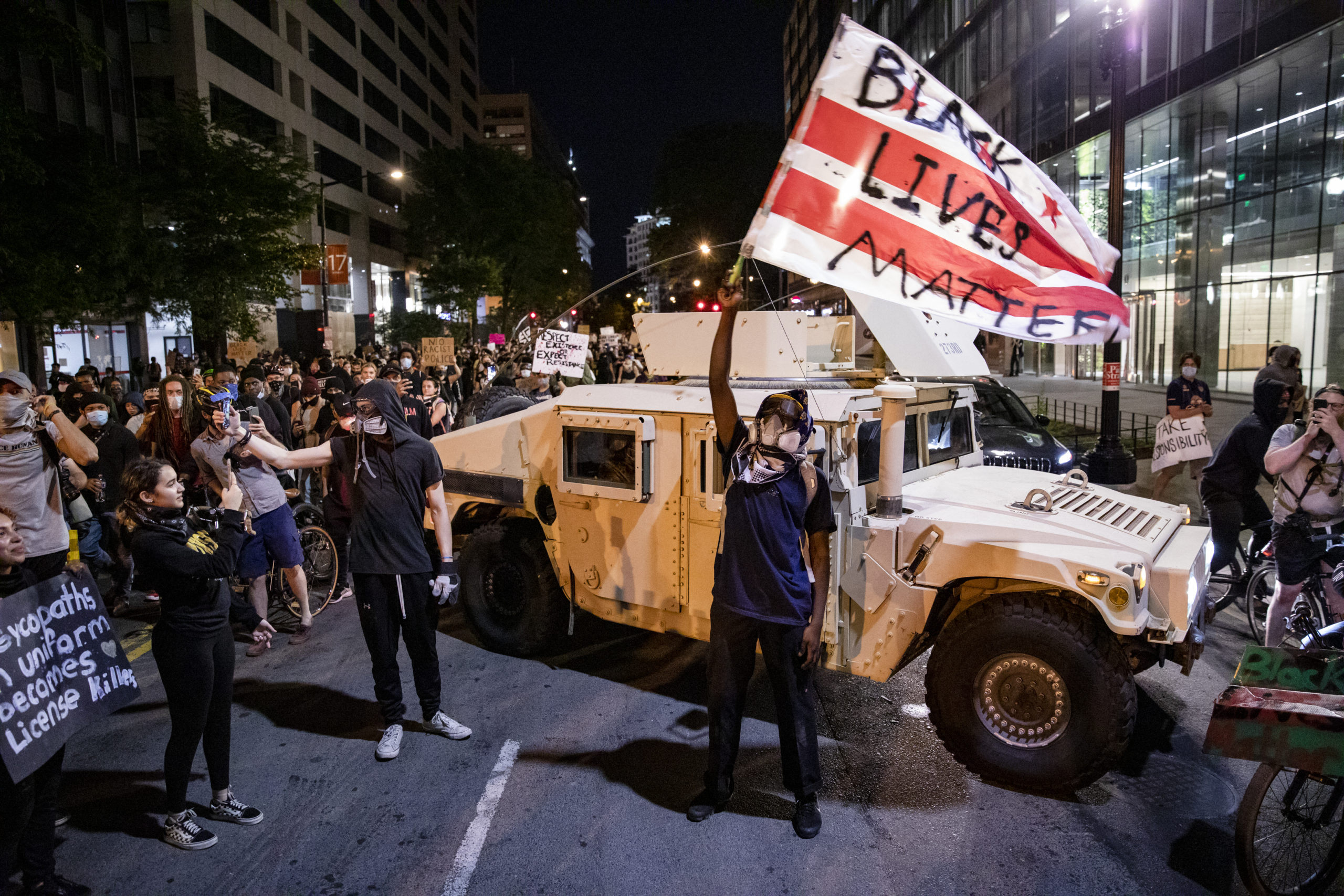 WASHINGTON, DC – JUNE 02: A protester waves a DC flag with Black Lives Matter spray painted on it next to a DC National Guard Humvee as protesters march through the streets (Photo by Samuel Corum/Getty Images)

“I think that it is a tool of white supremacy to say if you want freedom, then you get it by protesting peacefully,” Black Lives Matter New York leader Hawk Newsome said in comments that downplayed rioting.

“I don’t condone nor do I condemn rioting,” Newsome said on another occasion.

King addressed rioting in a famous speech titled “The Other America” in which he both condemned rioting and reminded Americans of what emotions and tragedies spur rioting. King noted that American cities are “potentially powder kegs” as a result of the “disappointment and even bitterness in the Negro communities.”

“Let me say as I’ve always said, and I will always continue to say, that riots are socially destructive and self-defeating,” King said. “I’m still convinced that nonviolence is the most potent weapon available to oppressed people in their struggle for freedom and justice.” 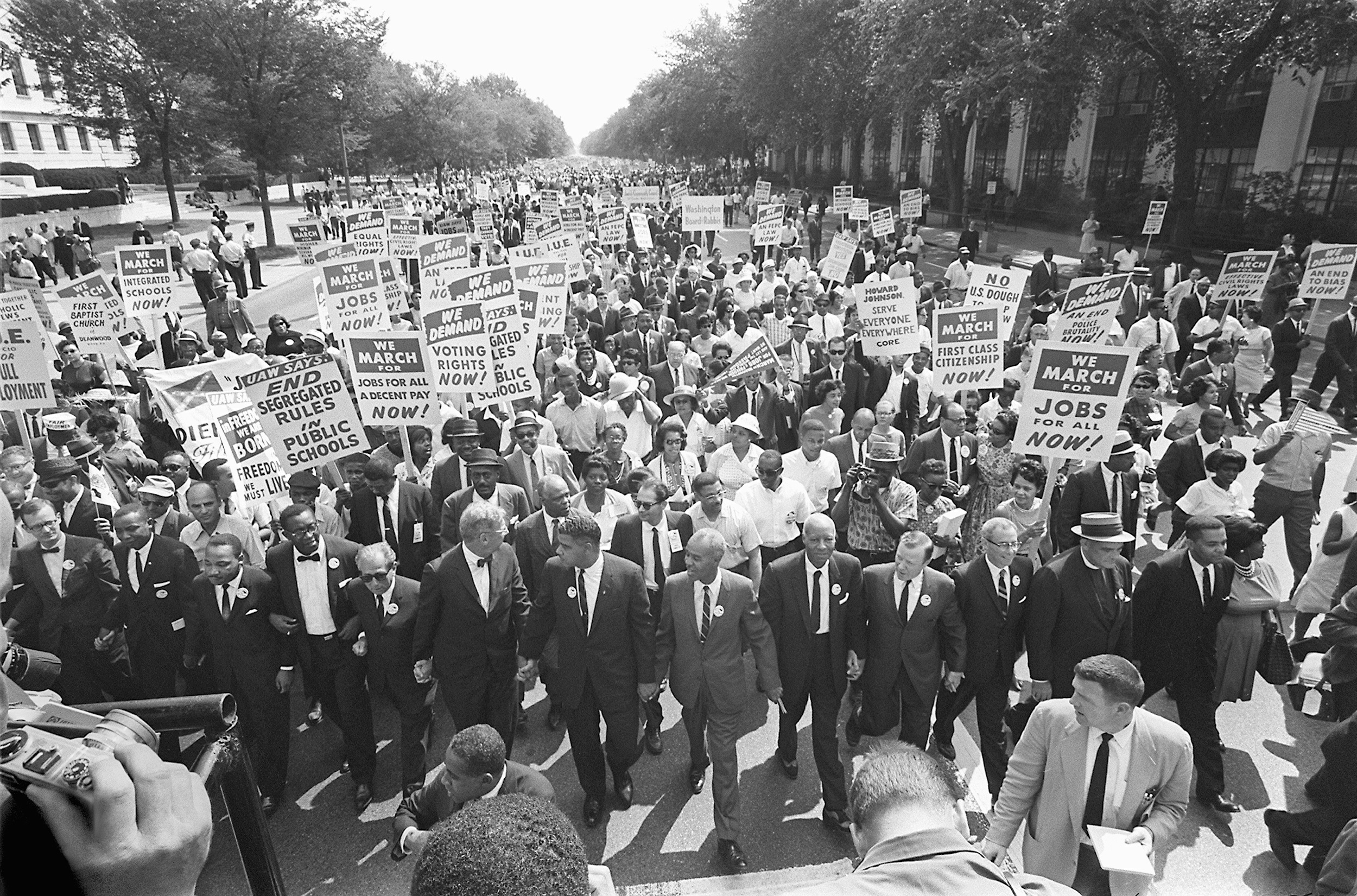 “I feel that violence will only create more social problems than they will solve,” he continued. “That in a real sense it is impracticable for the Negro to even think of mounting a violent revolution in the United States. So I will continue to condemn riots, and continue to say to my brothers and sisters that this is not the way. And continue to affirm that there is another way.”

In comments that many activists and BLM proponents clipped and cited as vindication for rioting this summer, King continued, “But at the same time, it is as necessary for me to be as vigorous in condemning the conditions which cause persons to feel that they must engage in riotous activities as it is for me to condemn riots.”

King emphasized that the riots do not “develop out of thin air” and that “certain conditions continue to exist in our society which must be condemned as vigorously as we condemn riots.”

“In the final analysis, a riot is the language of the unheard. And what is it that America has failed to hear?” pic.twitter.com/Als3jhxaGH

King said that America stood in danger of recurring riots as long as “America postpones justice,” urging reforms to prevent such incidents from happening again.

“Social justice and progress are the absolute guarantors of riot prevention,” he said.