Chrome Artistic Barber in Ontario, Canada, opened as a film studio in order to comply with the province’s COVID-19 restrictions.

Although many businesses were forced to close by Ontario’s COVID-19 order, which went into effect Jan. 14, film and television productions are allowed to continue. Chrome announced that it would be reconfiguring as a film production studio to comply with those rules in a Facebook post.

Barbershop owner Alicia Hirter defended the move to CTV News. “I’m a single mom, I’m not about to move into low income property with my son. As a business owner and a mother, I had to make my own call,” she said. (RELATED: Democratic House Speaker Nancy Pelosi Says San Francisco Salon Purposely Set Her Up)

“You’re telling me Walmart can sell bananas that 17 people have touched but I’m not allowed to operate? It’s morally wrong. You can’t expect us to shut down,” Hirter continued.

Ontario’s provincial government is offering loans of up to $20,000 for small businesses affected by the shutdown, but Canadian Federation for Independent Business President and CEO Dan Kelly said that the program does have some gaps.

Ontario’s new Small Business Support Grant is now open. It is a solid program & has been well-designed, especially as it includes new (2020) businesses. CFIB has identified some early gaps, including support for those locked down earlier in the pandemic.https://t.co/MpJrLa5IGA

Chrome’s online reservation app allows customers to choose between an “Adult Audition” and a “Kids Audition.” The “audition will be recorded for intent (if chosen) to later use in a podcast and/or documentary format.” 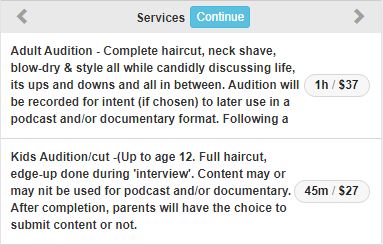 The City of Toronto has launched an investigation into Chrome’s continued operation, according to CTV. “Businesses that do not comply with the Provincial Orders and Regulations will be investigated and can anticipate consequences,” a city official said.