“Whether they personally identify with Sanger’s ideology or not, they continue to carry out her mission, by serving as the leading executioner of our children,” Watson said. “The same Sanger they claim to disavow would applaud their efforts and results, as a disproportionate percentage of Black children have been killed in Planned Parenthood’s abortion clinics.”

“Acknowledging a racist history does not absolve them of the blood on their hands, as they continue to take full advantage of victims of the racism they decry,” Watson said.

In the Saturday New York Times op-ed, McGill Johnson touched on Sanger’s support for eugenics as well as the speech Sanger gave to the women’s auxiliary of the Ku Klux Klan. The Planned Parenthood president did not make mention of Sanger’s “Negro Project,” an initiative aimed at giving black women access to birth control. 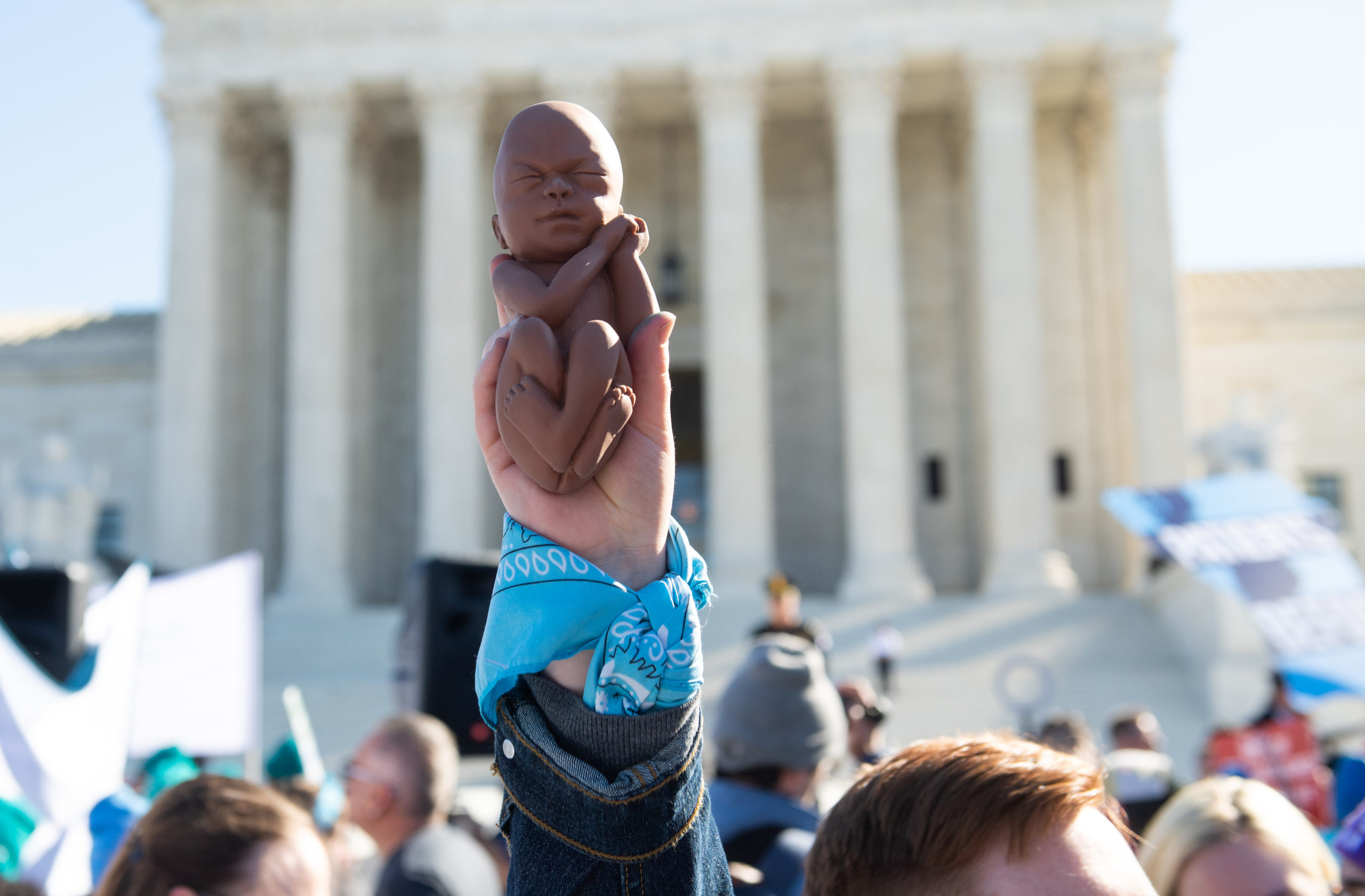 An anti-abortion protester holds up a baby doll during a demonstration outside the US Supreme Court in Washington, DC, March 4, 2020, as the Court hears oral arguments regarding a Louisiana law about abortion access in the first major abortion case in years.  (Photo by SAUL LOEB/AFP via Getty Images)

“We believe birth control knowledge brought to this group, is the most direct, constructive aid that can be given them to improve their immediate situation,” Sanger wrote in 1939 of the black community.

McGill Johnson wrote that “up until now, Planned Parenthood has failed to own the impact of our founder’s actions,” but noted that whether Sanger was a racist is “not a simple yes or no question.”

“We don’t know what was in Sanger’s heart, and we don’t need to in order to condemn her harmful choices,” the Planned Parenthood president said. “What we have is a history of focusing on white womanhood relentlessly.

“Whether our founder was a racist is not a simple yes or no question,” McGill Johnson said. “Our reckoning is understanding her full legacy, and its impact. Our reckoning is the work that comes next.”

Dr. Deborah Honeycutt, board chair of Human Coalition Action, said that “Planned Parenthood has contributed to the harm of women of color for decades,” saying that McGill Johnson’s “so called ‘reckoning’ does nothing to change that truth.” (RELATED: ANALYSIS: Infanticide Is A Real Issue, Despite Establishment Media Narrative)

“They have failed to confront the white supremacy within its organization, as they continue to aggressively prey on Black and brown communities with abortion,” Honeycutt said. “Destroying human life contributes to a culture of death and injustice, and Planned Parenthood will always be known for killing a generation of minorities, just as Margaret Sanger dreamed that it would.”

In a 1939 letter, Sanger described her plan to reach out to Southern black ministers and leaders in order to quell suspicions about the birth control clinics she was opening. Sanger explained that she thought the “Negro population” would be more amenable to learning about birth control from black leaders.

“While the colored Negroes have great respect for white doctors, they can get closer to their own members and more or less lay their cards on the table, ” Sanger wrote in 1939. “They do not do this with the white people, and if we can train the Negro doctor at the clinic, he can go among them with enthusiasm and with knowledge, which, I believe, will have far-reaching results.”

Sanger added that the doctor’s work should be only with the “Negro profession and the nurses, hospital, social workers, as well as the County’s white doctors.” (RELATED: Vast Majority Of Women Affected By Alabama, Georgia Laws Are Black)

“His success will depend upon his personality and his training by us,” Sanger said.

“We do not want word to go out that we want to exterminate the Negro population, and the minister is the man who can straighten out that idea if it ever occurs to any of their more rebellious members,” she wrote.

Sanger also emphasized a strong interest in furthering eugenics through birth control on many occasions.

“Birth Control, on the other hand, not only opens the way to the eugenist, but it preserves his work,” she wrote in a February 1919 article titled “Birth Control and Racial Betterment.” “Furthermore, it not only prepares the ground in a natural fashion for the development of a higher standard of motherhood and of family life, but enables the child to be better born, better cared for in infancy and better educated.”

Birth control did not mean “contraception indiscriminately practiced” but instead the elimination of defective “human weeds,” Sanger wrote in 1923.  She also described eugenics as “the most adequate and thorough avenue to the solution of racial, political and social problems,” in a 1921 article.

“I am glad that Alexis McGill Johnson is finally acknowledging what many Black leaders have said for decades – Margaret Sanger harbored racist and eugenicist views,” Human Coalition Action’s executive director Rev. Dean Nelson said in a statement. “The problem with Margaret Sanger is more than just her ‘association’ with white supremacist groups and eugenics, it’s the implementation of those views in creating the largest abortion provider in America targeting people of color.”

“You cannot acknowledge the racist person and history without admitting to the racist vision that has resulted in nearly 80 percent of Planned Parenthood’s abortion facilities being located within walking distance of minority neighborhoods,” Nelson said.