An Ohio police officer ran over a shooting victim as he lay bleeding in the street in response to several 9-1-1 calls on Sunday night, police said.

Officer Amanda Rosales of the Springfield Police Department allegedly ran over 42-year-old Eric Cole in response to multiple reports of a shooting that took place around 11:20 p.m. Cole, who had been shot in his left arm, died around midnight after being rushed to the hospital after the accident, according to the Kansas City Star.

Cole called 9-1-1 after the shooting and told the dispatcher that he was laying in the middle of the street before Rosales arrived, the Kansas City Star reported. However, Rosales reportedly paid attention to the home addresses rather than the road. (RELATED: Tacoma Police Officer Drives Through Crowd, Runs Over One, Video Shows)

The cause of Cole’s death has yet to be confirmed as authorities await his finished autopsy report, however Rosales has been placed on administrative leave as the Ohio Police Department is currently conducting an Internal Affairs investigation into the incident, according to the Kansas City Star. Springfield Police Chief Lee Graf claimed that the officer’s actions were accidental at a press conference Wednesday. 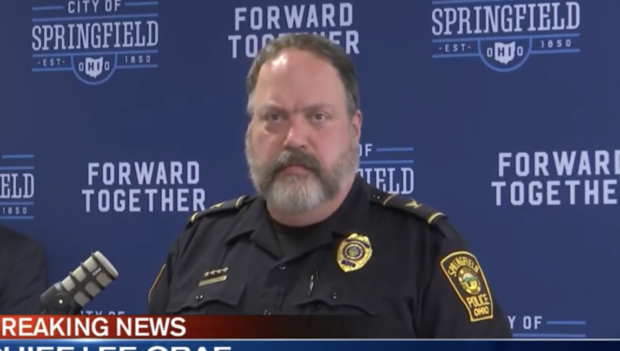 However, Cole’s sister retaliated against Graf’s claims alleging that “there is no way in hell” the officer ran over her brother accidentally.

“Excuse my language but there is no way in hell she did not see him…my brother made a 911 call, he was on the phone with dispatch saying he’s in the middle of the street. Y’all see it as an accident. I don’t. I watched the video,” she said, according to the Kansas City Star.

Graf reportedly responded that the camera footage of the incident does not indicate what the officers witnessed. “I would remind everyone that a camera helps us immensely … but that camera focuses where it’s pointed. It’s not an indicator of what the officer is seeing, or where they’re looking.”