The number of births in the U.S. fell by 4 percent from 2019 to 2020 amid the coronavirus pandemic, the largest drop since 1973, a report from the Centers for Disease Control and Prevention (CDC) announced Wednesday.

Births in the U.S. have declined at about a 2% rate annually since their 2007 peak, and the trend continued in the first half of 2020 when the impact of the pandemic was relatively limited, the report found.

New Mexico saw the largest drop in births in the second half of 2020 with an 11 percent drop, followed by New York (9 percent), and California, Hawaii, and West Virginia (8 percent), the report said. Births declined in all states during this period, with 43 states seeing statistically significant declines. 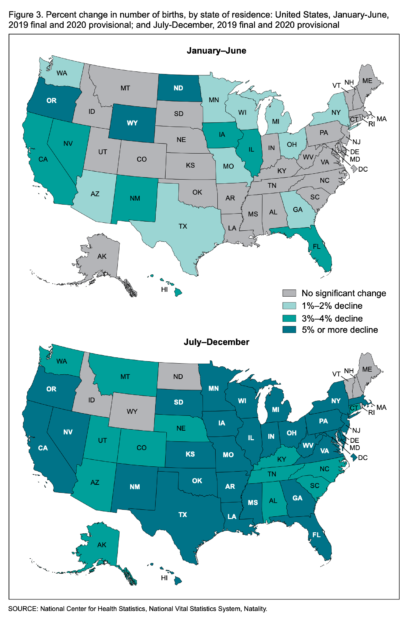 Births fell in all states in the second half of 2020, with 43 seeing statistically significant declines. (NCHS / CDC)

Preliminary data the CDC released in May found that the total fertility rate fell to 1.64 children per woman in 2020. A total fertility rate of 2.1 is considered “replacement level” by demographers, as two parents need to produce two children on average for the next generation to remain the same size.

This decline in fertility has been a global trend, with Europe and East Asia seeing even lower levels than the U.S. The most recent national census in China found that their total fertility rate dropped to 1.3 in 2020, among the lowest in the world. (RELATED: Pope Francis Decries Plunging Birth Rates: ‘No Future’ Without The Family)

A June study published in JAMA Network Open found that University of Michigan medical records, which predicted the birth rate drop early in the pandemic, anticipate a surge in births in the summer of 2021.