A court in China sentenced Canadian businessman Michael Spavor to 11 years in prison for alleged espionage Wednesday, prompting outrage from the U.S. and Canada as tensions remain high amid an ongoing diplomatic dispute.

The intermediate court in Dandong, a border city near North Korea, found Spavor guilty of providing state secrets to overseas contacts and ruled he would be ultimately deported after completing his prison sentence, according to NPR. Spavor has already spent nearly three years in detention with almost no contact with Canada’s government.

Dominic Barton, Canada’s ambassador to China, said during a press conference Monday that the timing of Spavor’s sentencing is “not a coincidence.” He told reporters the Chinese court’s decision is linked to another high-profile espionage case in Canada involving Meng Wanzhou, chief financial officer of Chinese telecom giant Huawei. 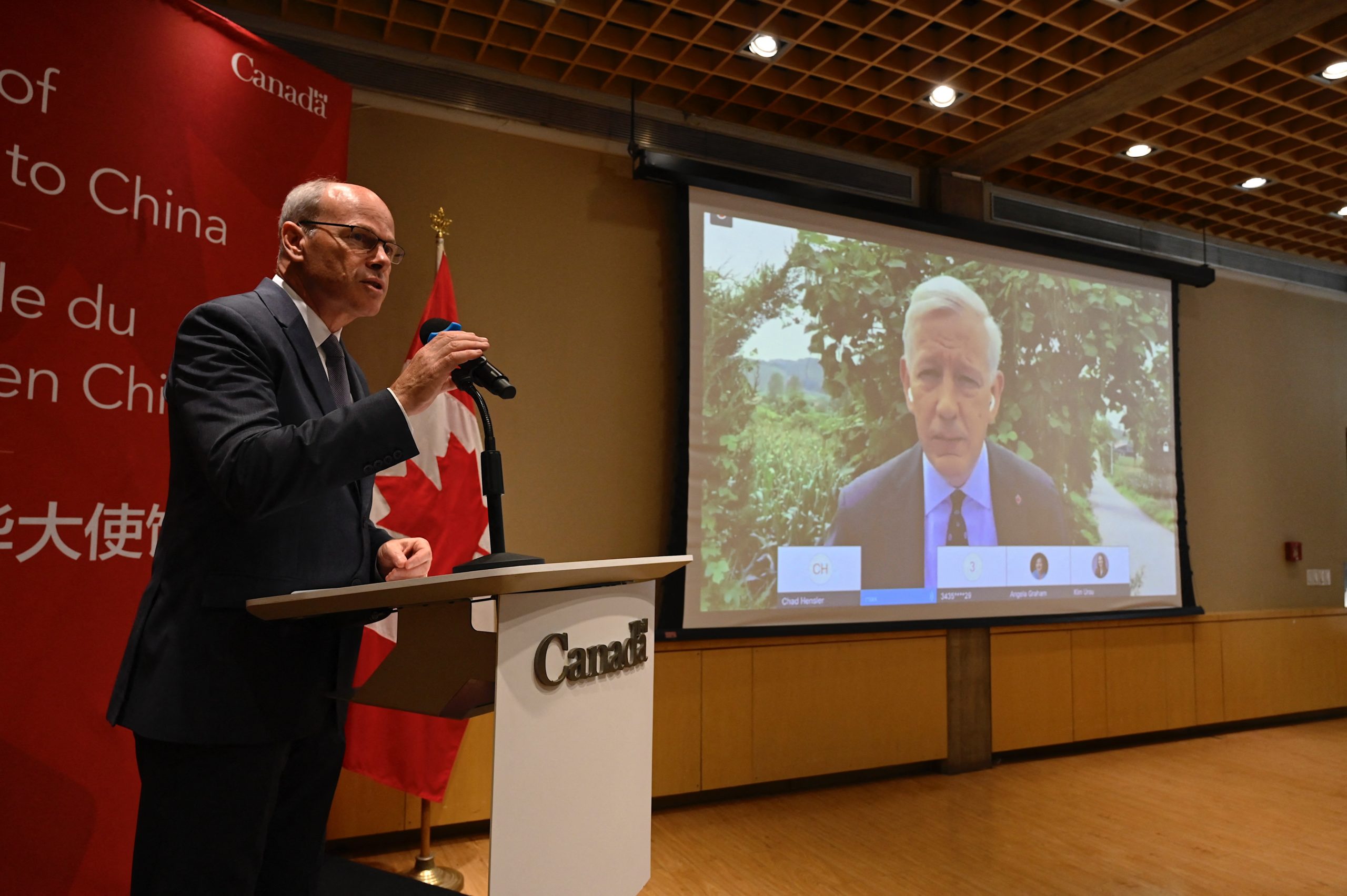 A screen shows Canadian Ambassador Dominic Barton delivering a statement from Dandong via video link at the Canadian embassy in Beijing on August 11, 2021 (Jade Gao/AFP via Getty Images)

Meng was arrested in December 2018 in Vancouver on a U.S. extradition request related to alleged violations of U.S. sanctions against Iran. A provincial judge in Canada will hear final arguments this week about whether to extradite the Huawei executive to the U.S., where she could face up to 10 years in prison on charges of trade secrets theft, The Associated Press (AP) reported.

Canadian Prime Minister Justin Trudeau condemned the Chinese court’s sentencing of Spavor as “absolutely unjust” in a statement Wednesday and called for his immediate release, according to Reuters.

“The verdict for Mr. Spavor comes after more than two and a half years of arbitrary detention, a lack of transparency in the legal process, and a trial that did not satisfy even the minimum standards required by international law,” Trudeau said.

Secretary of State Antony Blinken also condemned the sentencing and said Spavor and former Canadian diplomat Michael Kavrog, who were detained together on espionage charges in December 2018, “have not received the minimal procedural protections during their more than two-and-a-half-year arbitrary detention.”

We join our partners in condemning Beijing’s sentencing of Canadian citizen Michael Spavor, and calling on Beijing to immediately release Michael Spavor and Michael Kovrig, both arbitrarily detained for more than two-and-a-half-years. People are not bargaining chips.

“In my discussions with officials, I have raised several cases of both U.S. and Canadian citizens subject to arbitrary detentions and exit bans in China, and I strongly support the immediate and unconditional release of all those whom the People’s Republic of China has arbitrarily detained,” Blinken said in a statement Wednesday.