As fears over rising cases of the COVID-19 delta variant grip the country, several parts of Australia have implemented severe restrictions in an effort to curb the spread of the virus.

The government of New South Wales (NSW), Australia’s most populous state, imposed strict lockdowns Saturday in response to rising cases of the delta variant. The state issued stay at home orders, permitting people to leave their houses only for essential shopping, medical care and work.

“Australia was a penal colony, and it kind of feels like that now,” Genevieve Neve, an actor in Australia, told CNN. “We feel like prisoners in this country.”

Protests erupted across the country in late July as Australians grew weary of the lockdowns. One of the protests’ organizers, Anthony Khallouf, was sentenced to eight months in jail Friday for breaking, and encouraging others to break, the public health restrictions.

The orders are enforced through Operation Stay At Home, a collaboration between the NSW Police Force and the Australian Defense Force (ADF), Australia’s military, the NSW government announced. Law enforcement is authorized to ticket citizens more than 5 kilometers from their homes, set up random checkpoints on roads to ensure compliance, and close down non-compliant businesses. (RELATED: Pro-Lockdown Bot Army Descends On Social Media)

“From this week we’ll be issuing $5,000 fines to people and closing premises which continue to break the health orders” NSW Police Commissioner Mick Fuller said in the announcement. “Don’t complain if this happens to you – police are over the rule breakers.”

Police and military are knocking on people’s doors to ensure compliance, often demanding they answer health-related questions, The Guardian reported. Malaz Majanni, a resident of a Sydney suburb, told the Guardian police had come to his home everyday after he and his family tested positive for the virus.

“Every morning we get calls from the police and every morning it’s a different story,” Majanni said. “Today they called and asked to speak to the one-year-old.” 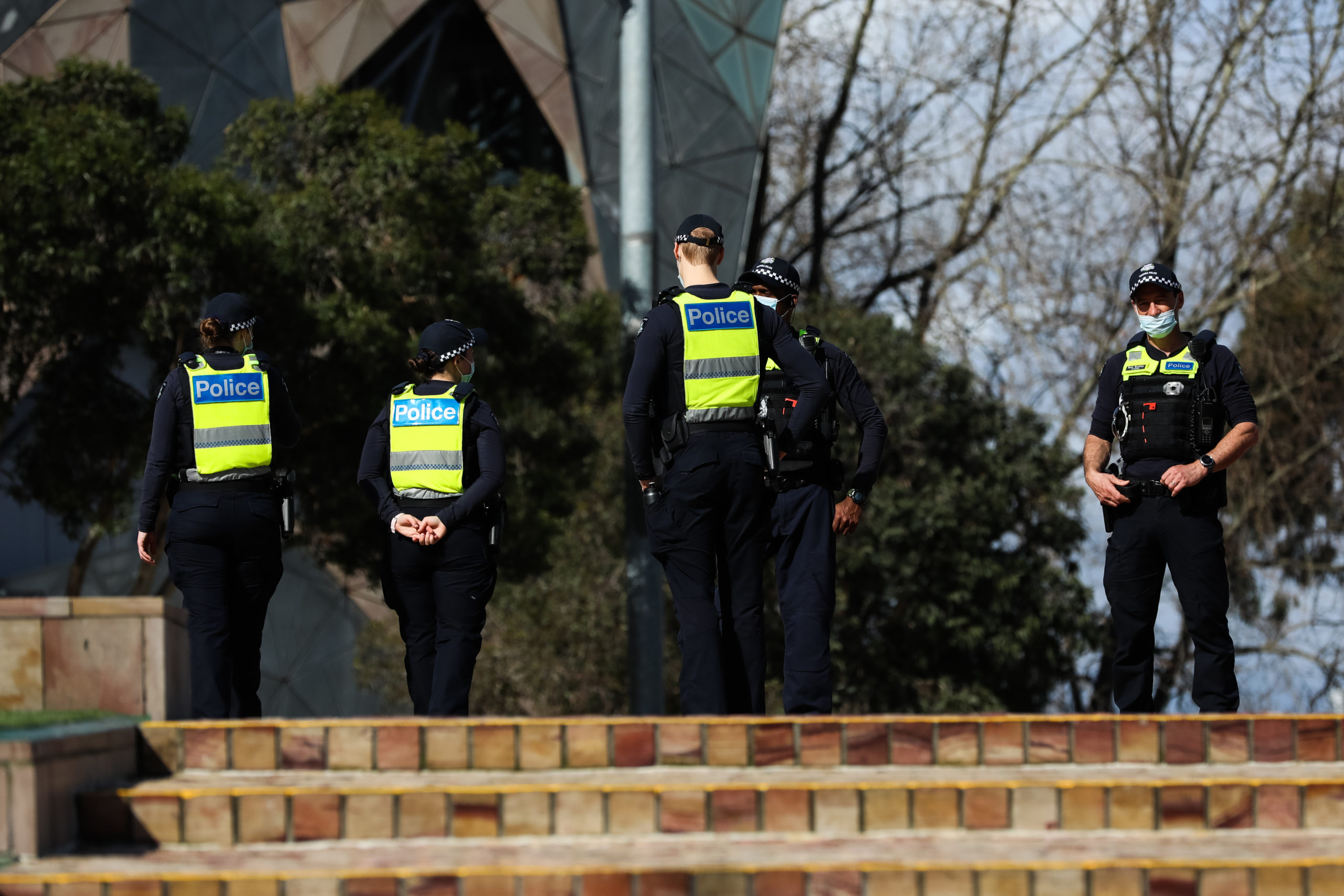 Police are seen on patrol at Federation Square on August 17, 2021 in Melbourne, Australia. (Photo by Asanka Ratnayake/Getty Images)

Public health authorities across the country are also instructed to enforce mandatory periods of quarantine for those returning from overseas or entering certain states, as well as those in close contact with someone who may have COVID-19. Local governments have repurposed hotels to serve as makeshift quarantine facilities.

Moreover, Australians need to obtain permission from the government to leave the country. Citizens performing essential work and conducting official government business are exempt from the travel restrictions, while everyone else must provide a “compelling reason” to depart.

“We are suffering from what is ‘pandemic policy insanity’ in this country,” George Christensen, a member of Australia’s parliament, told Fox News. “I fear that there is too much fear about this virus.”

Australia first began locking back down in late June 2021 over the growing threat of the delta variant, with NSW capital Sydney entering lockdowns on June 26 followed by major cities Brisbane, Darwin and Perth later that month.

Australia’s official COVID-19 plan recommends “stringent lockdowns” as a measure to curb the spread of the virus until at least 70% of the country is fully vaccinated. Only 27.5% of Australians over the age of 16 were fully vaccinated as of Aug. 17, according to data from Australia’s Department of Health.

The country saw its first COVID-19 death in three months on July 13, with cases and deaths continuing to rise despite lockdown measures, according to data from the World Health Organization. (RELATED: Lockdown Enthusiasts Are All Over The Delta Variant. How Serious Is This Strain?)

Another state, Victoria, imposed stay at home orders and curfews Monday, with residents in the capital city Melbourne only allowed to leave home between 9:00 p.m. and 5:00 a.m. for “authorized work” or medical and childcare emergencies. Residents are also not permitted to travel to other areas of Victoria except in certain exceptional cases, and cannot be more than 5 kilometers away from home.

Police have gone as far as breaking up private gatherings at people’s homes, even launching an investigation into a video of an engagement party attended by dozens of unmasked guests.

Premier of Victoria Dan Andrews announced Monday that Victorians are not permitted to remove their masks to consume alcohol outdoors, and extended the 9:00 p.m. curfew into September.

“[It’s] making a criminal of someone putting the bins out at 9.05pm. It is appalling overreach – punishing the innocent because Andrews has no plan,” opposition leader Michael O’Brien tweeted in response. 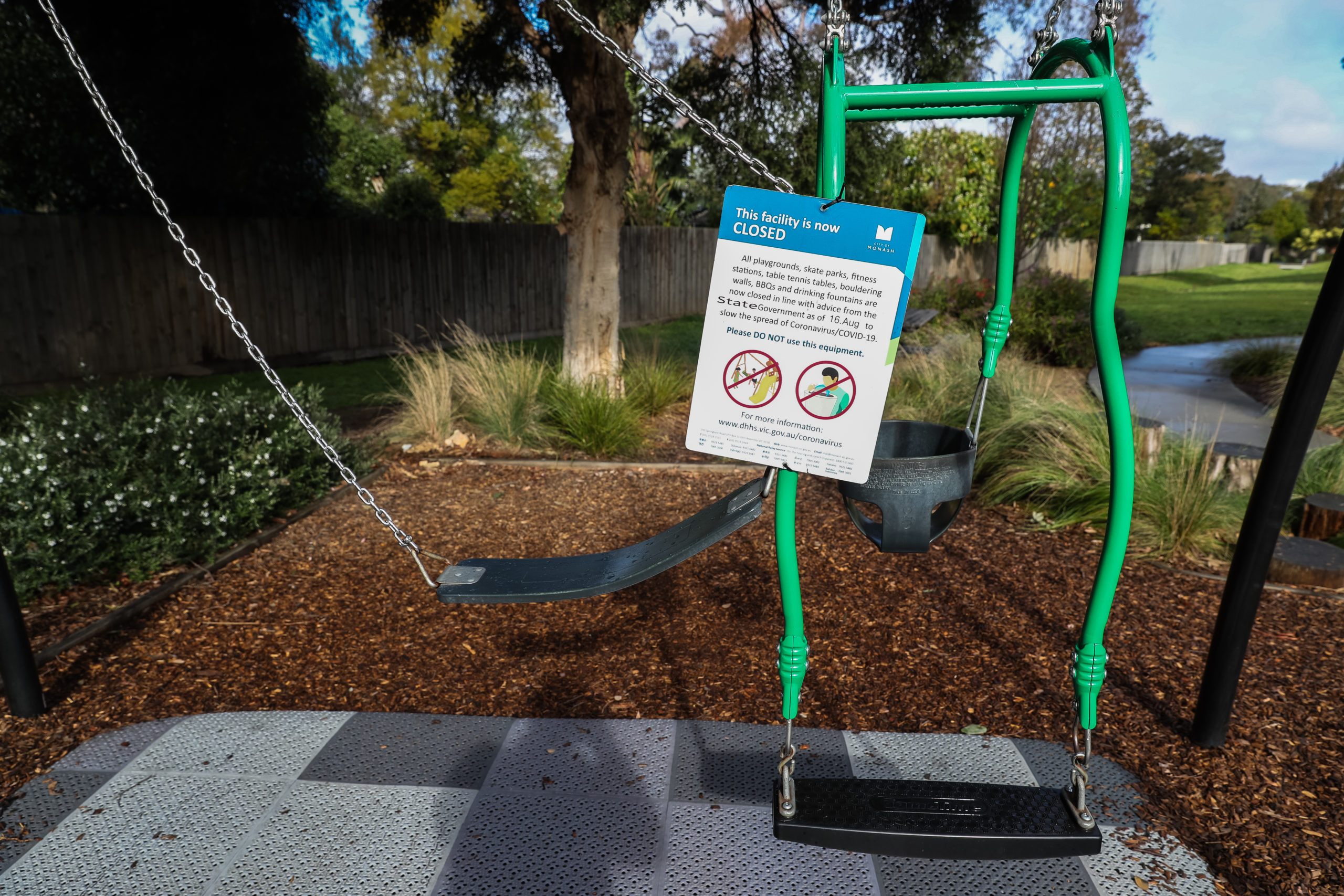 Two swings are seen tied together with a sign advising the closure of a playground in the city of Monash on August 17, 2021 in Melbourne, Australia. (Photo by Asanka Ratnayake/Getty Images)

States have also imposed border restrictions, with Queensland requiring all interstate travelers to be vaccinated and South Australia prohibiting travelers from New South Wales, Victoria and the Australian Capital Territory from entering.

One man was even handed a suspended sentence of 13 days in jail for violating interstate travel orders when he broke mandatory quarantine to use the toilet.

“A good 18 months into the pandemic, the nation is still trapped in April 2020,” he said. (RELATED: Psaki Says We’re Not Going Back To Lockdowns — But Doesn’t Completely Rule Them Out)

Given the continued rise in cases, it’s unclear when the lockdowns will end.

“From our self-imposed cages, it is very strange to watch the rest of the world opening up while our businesses go bust and millions of our kids are kept out of school,” David Limbrick, a member of the Victorian Parliament, wrote in The Wall Street Journal.