A Taliban special unit called Al Isha is reportedly using American-made biometric equipment and data left behind in Afghanistan to hunt down Afghans who assisted U.S. and coalition forces.

Nawazuddin Haqqani, a brigade commander over Al Isha, reportedly said in an interview with Zenger News that the special unit is using hand-held biometric scanners taken from the U.S. military and a U.S. biometric database to identify anyone who worked with NATO or Indian intelligence.

“Now that Kabul is taken, operational work has taken a back seat and we’ve turned our focus on counterintelligence,” he reportedly told Zenger News in a mobile phone conversation Saturday. “While most of the brigade is now resting in different madrassas [Islamic religious schools], the Al Isha group is now the principal agency data project.”

Haqqani’s interview with Zenger News had not been fully released at the time of publication. The New York Post first reported the story Friday.

🚨🚨🚨 @Zenger SCOOP: Taliban has a US-built biometric database & 7,000 hand-held scanners that the US provided to Afghans (the US left them behind), & is using them to hunt American & Afghan enemies & even journalists (incl. interview w/a Haqqani leader) https://t.co/mnjfjhO6xE

The equipment now reportedly being used by the Taliban contain biometric data such as iris scans and fingerprints, along with biographical information, and are stored in large databases. Officials noted the equipment was used to collect data on Afghans who assisted U.S. forces and were often used in national identification cards. (RELATED: Sullivan Says ‘Fair Amount’ Of US Weapons Have Fallen Into Taliban Hands)

The Department of Defense had initially planned to gather biometric data on roughly 80% of the Afghan population in order to locate terrorists and criminals, investigative reporter Annie Jacobsen told NPR in a January interview.

It’s unclear how much of the U.S. military’s biometric database on the Afghan population has been taken by the Taliban or whether the militant group has additional technology to help process the data. 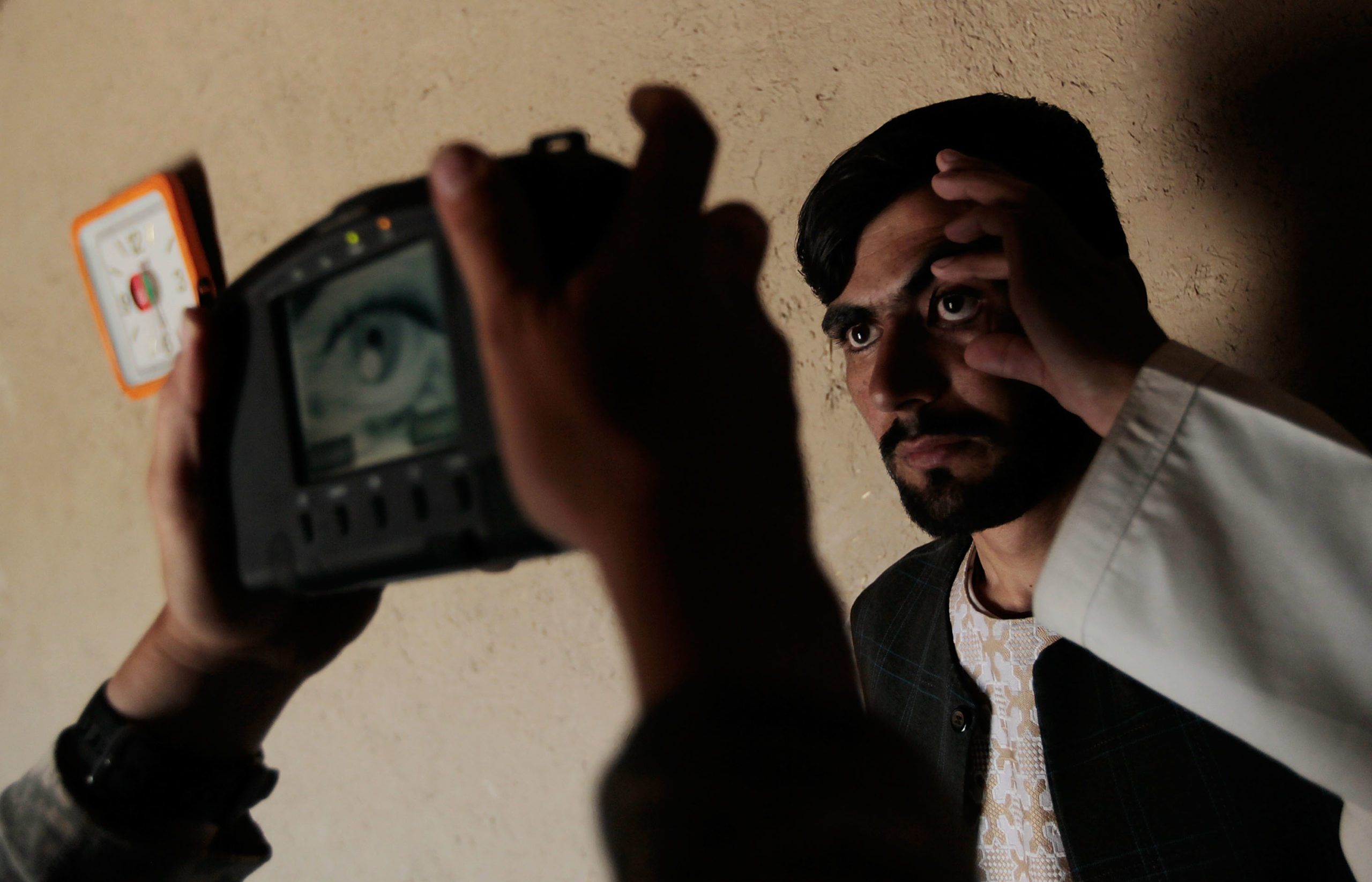 A US Army soldier in the 1-71 Cavalry performs an iris scan for identification purposes with a handheld biometric device June 14, 2010, in rural Dand District, just south of Kandahar, Afghanistan (Chris Hondros/Getty Images)

Haqqani reportedly told Zenger News that the Al Isha unit has more than doubled in size over the past month and now includes nearly 1,100 personnel spread out across most of the country, according to the New York Post. He also didn’t deny reports that Pakistani intelligence officers are helping the Taliban process biometric data.

“You are not that naive — you know the answer to that,” he said. “But what I can say is, it’s not necessary to train everyone in Pakistan. The Emirs are quite capable of training the foot soldiers to handle the equipment.”

Haqqani reportedly threatened that the “puppets” who worked with the U.S. or the former Afghan government “won’t be let off,” according to the New York Post.

“They will always be watched by Al Isha,” he reportedly told Zenger News. “Those who were barking about having US dollars in their pockets till a few days back — they won’t be spared. They can’t be spared, can they?”