A federal judge reportedly questioned Wednesday whether the obstruction of an official proceeding charge levied against more than 200 alleged Capitol rioters would pass constitutional muster.

U.S. District Judge Amit Mehta questioned whether the charge — leveled against at least 235 individuals — is too vague to be applied.

Mehta asked how prosecutors are distinguishing between “obstructing an official proceeding” of Congress, a felony that carries up to 20 years in prison, and the other misdemeanor offenses with which other alleged rioters have been charged such as shouting and interrupting a congressional hearing, according to The Washington Post.

“Essentially, what you said is, ‘Trust us’ … And that is a real problem when it comes to criminal statutes, to suggest, ‘We know it when we see it, and we’ll pick and choose when it is an appropriate exercise of prosecutorial discretion,” Mehta reportedly said. (RELATED: Feds Arrest Five Family Members Who Walked Into Capitol Building During Jan. 6 Riot)

Prosecutors allege at least 235 defendants disrupted the electoral certification on Jan. 6. Some of those charged with the felony are not accused of destroying property or hurting anyone, but rather sat in the Senate chamber, according to the Post.

Several defendants, however, allege the Jan. 6 session to certify the electoral vote does not count as an official congressional proceeding and therefore the law cannot be applied, according to the report.

Mehta said it is up to the government to explicitly prove how “corruptly” obstructing Congress is different from other misdemeanor charges like trespassing or disorderly conduct in the Capitol, charges that carry a maximum of six months in jail, according to the report.

“The million-dollar question is, what’s the limiting principle?” Mehta said, according to the Post.

Assistant U.S. Attorney Jeffrey Nestler argued that the alleged rioters’ objective “was not just to halt proceeding” but “to scare Congress into halting proceedings,” according to the report. 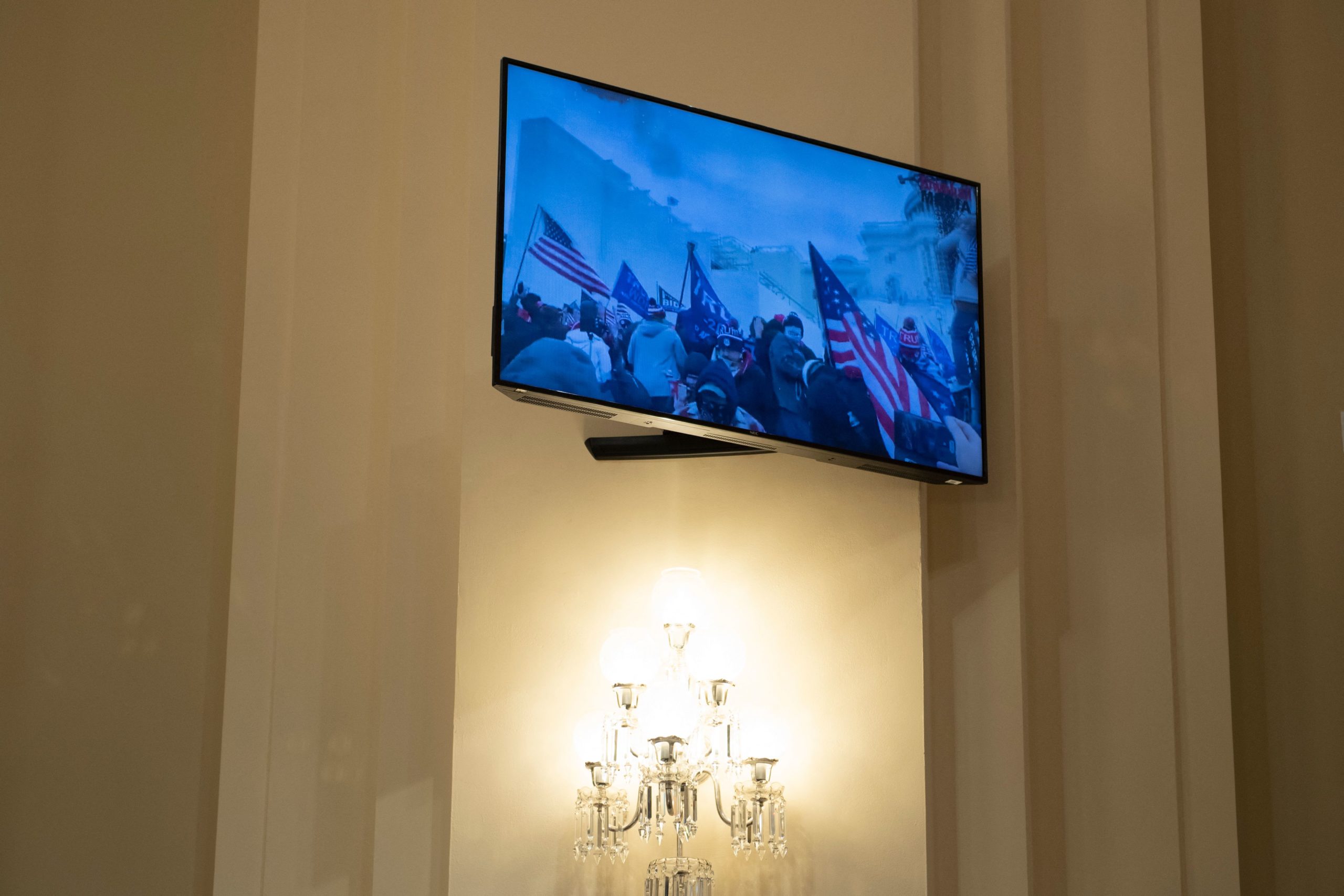 A video shows rioters during the Select Committee investigation of the Jan. 6, 2021, attack on the US Capitol, during their first hearing on Capitol Hill in Washington, DC, on July 27, 2021. – (BRENDAN SMIALOWSKI/POOL/AFP via Getty Images)

“Scaring the daylights out of everyone in the House or Senate … to me is very different than destroying evidence or intimidating witness,” Mehta said, according to the report.

Nestler said the government will prove the defendants “intended to intimidate Congress” and therefore fall under the felony charge.

David Fischer is defending Navy veteran Thomas Caldwell and said interrupting the vote certification is not the same as obstructing justice, according to the report.

“It would be like someone interrupting a congressional declaration of war. That’s a very serious event, but it’s not obstruction of justice.”

Moss called on both sides to address the question of how the government distinguishes between felony conduct and misdemeanor conduct, The Washington Post reported.

Moss warned there could be a “constitutional vagueness problem” if the government is unable to explicitly explain the difference between obstructing Congress and simply trespassing into the Capitol.

“Unless we can tell the public where that line is, there’s a problem,” Moss reportedly said.